You may also like
Dismiss
Norwegian Cruise Line vs. Carnival Cruise Line
7 Things You Can Only Do on Carnival Vista
Ultimate Abyss Slide on Royal Caribbean Cruises
Virtual Reality Experience on a TUI Discovery Cruise
5 Mind-Blowing New Cruise Attractions of 2018
The Best (Free) Things to Do on Carnival Panorama
Pictures of Norwegian Encore
Photos of Carnival Mardi Gras Cruise Ship, Before Its 2021 Debut
5 Cruises That Are Cheaper Than a Family Vacation in Orlando 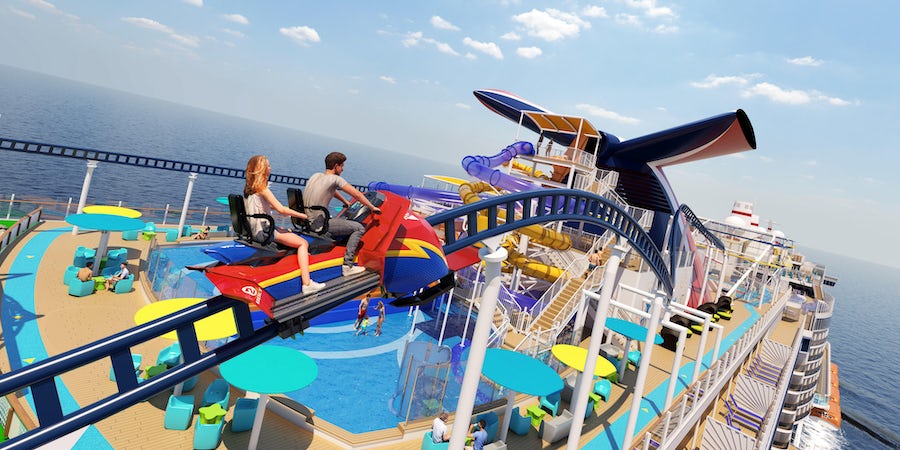 Ready for a jolt of adrenaline on the high seas? Look no further than Bolt, the first roller coaster at sea. Created by a roller coaster designer in Munich, Bolt: The Ultimate Sea Coaster debuted in July 2021 on Mardi Gras, the first of Carnival's Excel-class ships.

The first roller coaster at sea doesn't look like a typical one that you'd find at a theme park. Instead of sitting down inside of a cart, you are astride a two-person car, similar to a motorcycle. Don't worry, you're still strapped in very tightly with a metal seatbelt that is checked, double checked and triple checked before you take off.

The electric track starts on the top deck, near the back of the ship and winds its way around the funnel. You can go up to 37 mph -- some of which you can control yourself by pulling back on the right handlebar or by pushing a "boost" button on the left handlebar. There's a digital speedometer that you can watch, but you're likely going to be too busy screaming or checking out the sky-high sea views as you barrel your way around the track.

Am I a thrill-seeker? Generally, yes -- but I still had a burst of apprehension when I saw the first Bolt car careening around the track.

More than that, it was the screams coming from the participants. I hadn't expected a roller coaster on a cruise ship to offer real adrenaline, but then I got into line and saw the cars take off.

Each started up with a fast jolt, provoking screams from the riders that continued as they went into the first dip. "Hmm, maybe this isn't just for kids," I thought, watching. (There's no minimum age for Bolt, but you can't be shorter than 4-foot-4, taller than 6-foot-5 and weigh more than 300 pounds.)

You're allowed to ride Bolt either by yourself or as a twosome. I went solo on my first ride, which was good because I didn't want to have to fight anyone for control over the speed. I intended to jack up the car as fast as it could go.

My resolution faltered a bit after I was strapped in; the seatbelts are intimidating, and so is the track when you're staring ahead at it. I was a bit blind, however, as I had to relinquish my prescription sunglasses before getting on the car. (There is a handy cubby hole near the operators where your purses, glasses and other items are stored).

Related: Pickpocket-Proof and RFID-Blocking Gear to Keep Your Stuff Safe on a Cruise

But my sense of disorientation stopped when the operator started my car, and off I went. I yanked back on the handlebars while simultaneously pushing the boost button, going for maximum speed. I'm not sure if these two moves canceled anything out, but I was flying, fast, around the turns.

I honestly don’t remember much about that first ride, it went so quickly. The track is stable, and when you're in the driver seat, you are apt to concentrate on what's directly in front of you. There is a bit of a hairpin turn when you come around the funnel, where the cart tilts a bit. But don't worry, you'll never feel like you're going to fall off.

I got off of the ride a bit shaky and full of adrenaline (as you can see in the Bolt video we filmed). It took a while for the excitement to wear off. Real theme park thrills on a cruise ship? We're sold.

I took a second ride on Bolt later in the cruise, this time as a passenger. It wasn't quite as scary in the back seat, mainly because you have more of a chance to check out the views, as opposed to focusing on the track in front of you (or maybe it's because my friend wasn't pushing the car to 11). I recommend doing it twice to have both experiences.

A few house-keeping rules: You'll want to make sure that you're dressed appropriately for Bolt. You must wear shorts or capris -- no sundresses allowed -- and have closed-toe shoes. (We saw several people in sandals being turned away.)

Also be aware that the ship is expressly forbidding GoPros, phones or other cameras being worn when you ride. Don't try to get around it -- if something were to drop from the track, it could not only damage the roller coaster but seriously hurt another cruiser.

The staff are not allowed to take photos of you, and while the line said that they are thinking of installing a camera that snaps action shots, nothing was operational when we were there. Have a friend come and take a photo with your phone, or ask an obliging stranger. (We found people were eager to help.)

The price for Bolt is $15 for two laps around the track.

For now, Bolt will only be on Carnival Mardi Gras.