You may also like
Dismiss
Can an Expedition Cruise Transform Your Life? You Bet.
Cruise Ports Near Me: Your Guide to Cruise Ports You Can Drive To
9 Reasons You'll Love MSC Cruises (in the U.S.)
What Is the Biggest Royal Caribbean Ship?
Best Cruises We Didn't Take This Year
Cruise Lines May Offer Both Vaccinated and Unvaccinated Ships When U.S. Operations Resume
How Easy Is It to Book Newly-Released Cruise Itineraries? 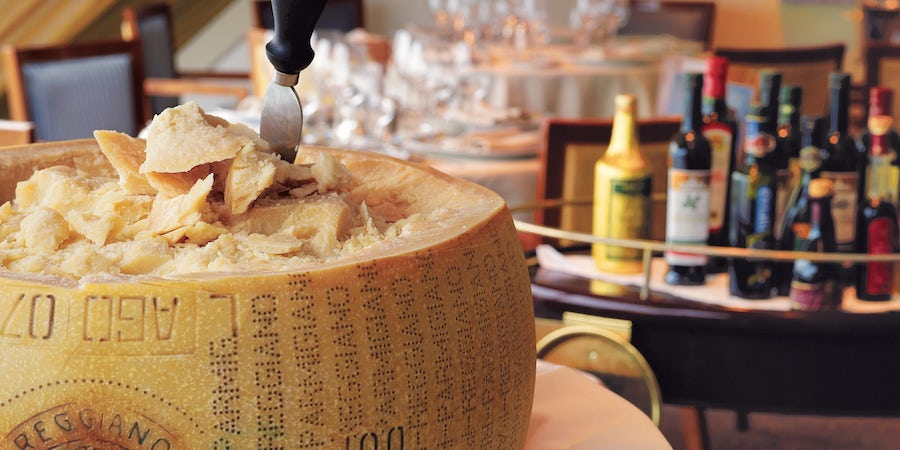 In Europe, Alaska and Beyond, Oceania's Culinary Pairings, Onboard and In Port, Create Authentic Experiences

Once upon a time, the cruise industry had a reputation for quantity over quality. The midnight buffet was alive and well, the chocolate fountains flowed — the maxim was, anticipate gaining a pound for every day spent aboard a cruise ship.

With the advent of celebrity chefs and the Food Channel, and the growth of regional cuisine and craft cocktails, our palates have become more sophisticated. We’re more adventurous when dining out, especially while on vacation. And we’re demanding more when it comes to a health and wellness focus to our dining, even on holiday. The good news: Oceania Cruises has literally staked its reputation with the trademarked claim, “the finest cuisine at sea.”

“Oceania’s emphasis on cuisine stemmed from the desire, as a brand, and collectively as individuals, to stand out in an increasingly crowded field in the cruise industry,” says James Rodriguez, Oceania’s Executive Vice President. “This came not just by serving great cuisines, but food that could rival even the finest restaurants ashore.”

Rodriguez adds that the line gave its culinary team access to the finest and freshest ingredients, and provided them with top-notch facilities and equipment — not to mention hiring the best talent to spearhead the initiative and deliver on the promise.

Oceania’s Executive Culinary Director is acclaimed chef and cookbook author Jacques Pépin, and his favorite family recipes are showcased on each ship — either his namesake venue, Jacques, or on the Bistro menu in the Grand Dining Room, which includes such classics as salade Niçoise or grilled five-peppercorn beef hanger steak. On Oceania there are also specialty dining experiences such as Toscana, offering a bounty of favorite dishes from Italy; Red Ginger, serving a fusion of mouth-watering flavors from across Asia; and Polo Grill, Oceania’s steakhouse.

Even the poolside Waves Grill has a marquee offering: a delectable surf and turf sandwich plumped with grilled Florida lobster medallions and slices of filet mignon on toasted ciabatta.

Start Your Journey in the Grand

I’d argue that where Oceania really excels is in its Grand Dining Room, offered on each of the fleet’s six ships. Here, not only will you have a delicious international menu, served under a glittering chandelier, but the line incorporates the food of the destinations for each of its itineraries. This means, while sailing the Inside Passage, you’ll find Alaskan king salmon prepared three ways, or a trapper meat pie with beef and lamb. Cruise on one of Oceania’s New England and Canada itineraries and enjoy Yankee pot roast, lobster mac ‘n’ cheese and, of course, New England clam chowder. Sail the Greek isles and you can look forward to spanakopita, moussaka, and a rich pork and celery stew known as xoirino selinato avgolemono.

“We’re not just serving the usual or ubiquitous dishes from Italy that many consider emblematic of the Mediterranean,” explains Oceania’s Corporate Executive Chef Franck Garanger. Guests on Med cruises will also find dishes from Spain, France, Croatia, Israel, Turkey, Morocco and Tunisia. “All of our venues have a wide variety of iconic Med dishes as well as those that many guests would consider adventurous or discoveries, such as traditional black risotto, a Tunisian fricassé or an Algerian tagine or chakhchoukha.”

Even an itinerary such as those navigating Canada and New England — a region I have never thought of as particularly gustatory — can surprise.

“Chefs here are embracing influences from around the globe, and there’s a burgeoning farm to table movement,” suggests Chef Kathryn Kelly, Oceania’s Director of Culinary Enrichment. “People don’t normally think of Halifax for a foodie scene but the sheer number of talented young and highly experimental chefs, along with the easy access to the freshest ingredients, make Halifax a must.”

On these voyages, Oceania features a “tremendous” amount of Atlantic seafood, with hundreds of dishes offered, ranging from gourmet favorites such as lobster thermidor and salmon supreme to elemental classics like Atlantic cod fish and chips or a Boston lobster roll.

And while most mainstream cruise lines stock their ships with frozen seafood, Oceania looks for the local catch, whenever possible.

“The food and beverage team is in constant touch with our port agents and local suppliers to see what the best catch and supply is,” says Bernhard Klotz, Oceania’s Vice President, Food and Beverage. “In Alaska, the great thing is the broad network of suppliers and the freshness of seafood. And with a ship the size of the Regatta, it’s easy to source ample supplies. This means we can offer fresh Alaskan seafood every night in all of the restaurants on board.”

And, yes — if you want to — you can catch it yourself. On every Alaskan cruise, there are opportunities for salmon fishing, deep-sea fishing for halibut or cod, and even setting out on the big crab boats.

“In many instances, guests can bring their catch back to the ship,” says Christine Manjencic, Vice President of Destination Services. “The onboard team will clean and prepare the catch to your liking in any of the restaurants.” Guests can take even cooking lessons or be welcomed into local homes to prepare and dine on a meal in the family kitchen.

“The great thing about the variety of tours in Alaska is they not only showcase the local seafood, but they can be as tame or adventurous as you like,” adds Manjencic. “Everything from fly-fishing in a stream or visiting a local oyster farm, to sailing on the crab boat from the Deadliest Catch.”

Expanding Beyond Menus to Spirits and Shore Excursions

Incorporating local tastes is not limited to food: Local spirits are also often brought aboard.

“In Alaska, we might pick up stock from the Skagway Brewing Company, Icy Strait Brewing, or the Alaskan Brewing Company,” says Klotz. “In Glasgow, we might pick up a small supply from the Wellpark or Drygate breweries, or in Dublin, some fresh kegs of Guinness. Our chefs and sommeliers go ashore and select local wines on virtually every cruise, or even spirits such as local grappas or limoncellos in Italy, or some of the hearty brandies in Croatia.”

Additionally, guests can look to select shore excursions to provide a deeper immersion into local cuisines. For instance, when docked in Civitavecchia, the Chef Tour and Authentic Roman Lunch reveals the regionality of Italian cooking.

“Roman cuisine is richer and heavier than many people anticipate,” suggests Mario Santoro, Executive Chef. “It’s extremely flavorful but that flavor comes from ample use of cream and butter, cured meats, beef, pork, and veal. Garlic along with pepper is also ubiquitous. Roman pasta styles are typically heartier and fuller noodles which are all that much better to hold the rich and often meaty sauces.”

“That’s why so many Romans had the traditional bacchanalian physique,” Santoro jokes.

Why Does Food Matter? All Great Cultures Express Themselves Through Cuisine

Beyond the restaurant offerings and the shore excursions, gourmands will also want to try out the Culinary Center found on Oceania’s Riviera and Marina ships. Here, you’ll learn the secrets behind sumptuous regional dishes at your own fully equipped workstation in a state-of-the-art teaching kitchen, taught by Master Chefs. You can even follow the chefs off the ship to explore the local bounty in ports from Antibes to Barcelona to Catania.

“Oceania doesn’t follow trends, it anticipates them and, in some instances, even creates them,” says Rodriguez. “We created the first hands-on cooking school at sea, and we introduced the very first chef-led culinary excursions that incorporate the cooking school.”

Garanger finds the discovery of new and different cuisines and dishes is one of the greatest parts of traveling.

Related: Why Avalon Waterways Is the River Cruise Line for You

“All great cultures express themselves through food, wine, and spirits and is something that our chefs love to get creative with,” adds Garanger. “Besides wanting to feed our guests well, we want to expose them to new culinary experiences and flavors.”

A native of San Diego, David Swanson has sailed on all of the big-ship cruise lines, but most enjoys the undiscovered ports and offbeat journeys of smaller cruise vessels. His writing and photography has been featured in the pages of National Geographic Traveler, American Way, and the Los Angeles Times for more than 20 years, and he has served on the Board of Directors for the Society of American Travel Writers since 2009.