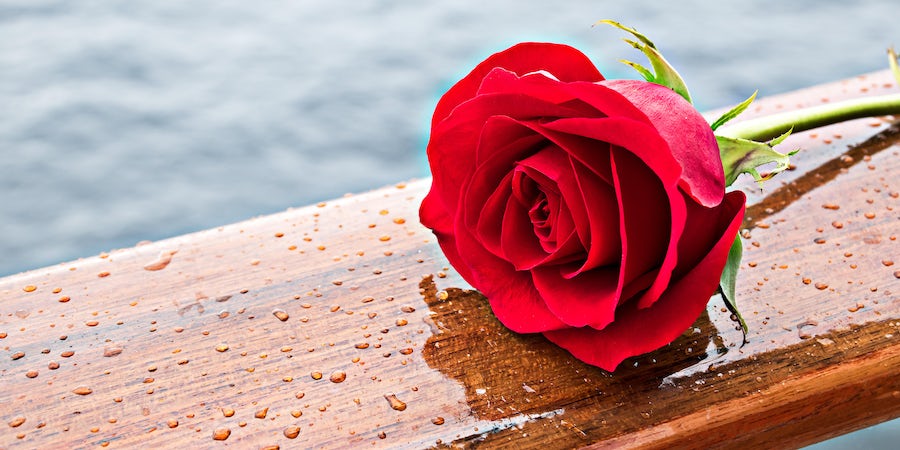 Onboard Romance ... for Crew

On one two-week cruise, the Spanish flamenco dancer was seeing the captain. One Belgian hostess was, for a time, sharing the Italian band leader's cabin (then later, the one occupied by the American host) and the English female singer of the duo was with the Italian saxophonist. An English male singer was with an American hostess, one Australian telephone operator was substituting for the wife of the Greek chief electrician and the other English operator was engaged to a Greek steward.

Romantic interludes between crew members, whether temporary or long-term, run rampant on cruise ships. I should know -- I worked as a cruise ship staff member before and after I married my husband, a cruise captain for Celebrity Cruises.

There will always be crew cruise affairs -- from the captain's quarters on down -- deck by deck, department by department. The constant day-in and day-out life onboard is a veritable melting pot. Combine tight living quarters, long working days and months of duty (often with few days off) that keep cruise ship crew away from established friends and families -- and the pot bubbles and steams, stirring up heated dramas and dramatic scenes.

Related: 5 Ways to Go Behind the Scenes on a Cruise Ship

For crew members, romance is unlike anything folks experience on land -- where you start off in separate living quarters and can take a "timeout" by going to work or seeing pals. Onboard ships, time and space exist in the same, well, time and space. Until each staffer's contract (and they range from three months for the most senior officers to up to a year for some junior workers) is up, a break is nonexistent.

And even as ships have gotten bigger, and crew have become more spread out (with different positions being housed, in some cases, in various parts of ships), the basic positives and negatives of cruise ship romance have stayed the same.

On my first contract aboard a cruise ship, the ratio of women to men was 5 to 100. As a result, females could really pick and choose ... and were often the subject of relentless pursuit. One of the oddest dynamics was a scramble that occurred every 14 days or so (my first ship sailed two-week voyages); the cast of characters would change as contracts ended -- and others began.

Today, the score is about even between women to men with more diverse ages and nationalities to heighten interest. But it's still the same old three-ring circus (whose performances tend to be fairly continuous). It's easy to understand why: With 500 to 2,000-plus cruise ship crew living in one place -- and with the job's natural byproduct of being months away from home at sea -- people naturally seek out companionship as they miss family and friends.

Once you've become, er, fond of someone, gaining their attention is easy since most work regular shifts, eat together in the cruise ship's mess, celebrate together at crew parties and enjoy the gossip. Each ship literally is an island -- and like island living, privacy is nearly impossible to achieve. It isn't like you can meet up with a new crush at a bar at home (with no one knowing) or for dinner. In fact, candlelit dinners and movies away from "home" onboard are almost un-gettable luxuries. That's why time together is pretty much spent in respective cabins -- or in front of coworkers.

And as a result there's generally no shortage of commentary -- pro or con -- from fellow crew members who get to watch your relationship play out.

What's often amusing is that an onboard relationship is like pushing fast-forward on a remote control. Though time passes quickly, not even a second is wasted. On land, relationships develop slowly; on the ship, they are accelerated. If you are not compatible, you promptly move on. For some who have never been lavished with such attention, it can be somewhat overwhelming. It takes willpower and strength to hew to your priorities.

Often, crew romance is filled with pitfalls. Flaunting a relationship is not recommended -- it's neither diplomatic nor, in some cases, safe in such a confined environment. Jealousies are the worst downside. An ex of my one-time beau actually entered my cabin, pulled one of my formal gowns (my favorite, naturally) from the closet and ripped it apart with scissors, scattering sequins everywhere. A Canadian coworker once threw away the work clothes of a Honduran woman because the Honduran was developing a close rapport with my coworker's Polish boyfriend. One night, a Jamaican singer found out that his secret affair with an American singer was not so secret when her Italian band member boyfriend broke down the cabin door and beat him up.

And I'll never forget the interplay, so to speak, between a Bulgarian girl and two competitive suitors, as I witnessed her being taken over by a Greek safety officer and then taken back by her Bulgarian boyfriend -- with a hatchet. The safety officer found safety only at the next port and left the ship.

One interesting byproduct of today's international crew is living among people from other cultures. That definitely leads to some uncharted territories when it comes to having relationships. With a mix, literally, of 50-plus nationalities, traditions, cultures and differences, there's both a positive and a negative effect.

The positive is a respectful appreciation in learning the ways of others and building friendships. The negative is trying to blend two cultures. The Indonesian Muslim and the Filipina Christian who had spent four-and-a-half years together, secure in the tolerance and the support of the crew, ran into a glitch when they finally told their parents about their relationship. Each then wanted the other to convert but neither could and they broke up. I remember an Orthodox Greek man who fell in love with an Irish Catholic girl. Again, they were beloved and supported by coworkers. But on shore, each yielded to their own upbringings. He married an Orthodox Greek woman; she was wed to an Irish Catholic man. Yet they still managed to enjoy a tryst every year for decades. Neither was able to say goodbye to the other.

How Do Cruise Lines React to Onboard Romance?

At most cruise lines, "policy" so to speak is vague. It's accepted that crew members will form relationships for short trysts, the length of one contract or for a long time leading to marriage. What could corporate management even do to prevent onboard romance if it wanted? From a cruise line standpoint, issues arise when relationships develop into problems that impact work -- at which point one or both parties could be reprimanded, transferred or even dismissed.

Cruise lines have varying rules about allowing longtime and committed couples to cohabitate. Most consider requests from couples to be assigned to the same ship for their next contract; however, requests will be honored only if there are relevant position openings on the same ship, and married pairs will be taken more seriously than shorter-term partners.

Despite what you saw on "The Love Boat," passenger-crew romances are not permitted, with passengers banned from entering crew areas of the ship. Of course, romance still ignites between passengers and crew members from time to time. My favorite story is the couple who met up on their ship's helipad one night for a bit of pleasure without noticing they were spotlighted from the bridge. This story actually has a happy ending; they're married today and have three kids -- the first a result of that unforgettable night.

Less positive stories of passengers who've taken up with crew members (and vice versa) have ended with the crew member being forced to pack his/her bags to be sent home immediately.

In the end, the cruise ship crew romances I remember are the ones that lasted, those that survived the process of adapting from ship to shore. My own story is one of these; ironically, it didn't start out looking too promising. Though he was ruggedly attractive, my flame didn't spark the necessary fireworks on first impressions. As well, he was my boss (well, the boss of the whole ship as he was its captain) and being forced to see him day and night -- and having him pick on the smallest of details while offering constant assessment -- was, shall we say, no aphrodisiac.

Ultimately, I was drawn to his extreme honesty and high integrity; he sharpened my curiosity, cooled my temper and dared me to meet the challenge. He being a macho Greek and me being a typical outspoken American, we clash in all respects, from politics to everyday life, but amazingly we continue to find our way, having transitioned from life onboard to off. My American passport is stored next to that of my Greek husband.

Others too have made it work from crew days to a new life and have been enriched by the combination. Happy marriages were made between friends with different cultures and backgrounds, like a Canadian friend and her Swede, a Filipina coworker and her Spaniard, a Japanese acquaintance and her American, a Brit and an Israeli. The list of unifications goes on....

Related: 6 People You Should Think Twice About Inviting on a Cruise

And the best thing? Our traditions are intact and enhanced by the addition of the other culture we embraced.