You may also like
Dismiss
10 Best Cruise Lines That Stay in Port Late and Overnight
Coastal Cruise Tips
Best Cruise Ports for Fishing
11 Best Whale Watching Cruise Shore Excursions
Sail Here, Not There: Avoiding Overtourism in Cruise Ports
The World's Best Beaches to Visit on a Cruise
8 Exhilarating Shore Excursions
The Pros and Cons of a Port-Intensive Cruise
16 Pictures of Our Favorite Cruise Balcony Views
Why There's Still Nothing Like a Day on the Water 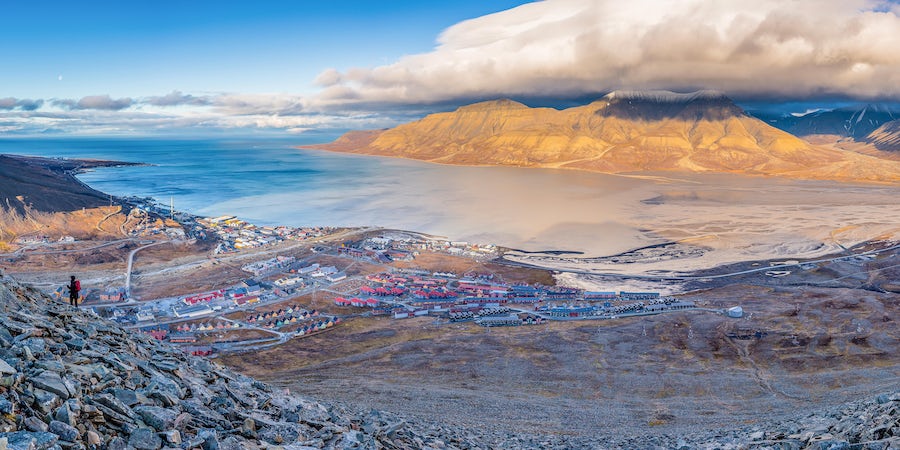 View over Longyearbyen and Adventdalen Fjord from above, Svalbard, Norway (Photo: Thomas Hagenau/Shutterstock)

A message from Cruise Critic: During this unprecedented time throughout the world and across the cruise industry, it is important to note that article information might be impacted by cruise line hiatuses and port closures due to COVID-19.

Heading into a new decade of cruising, cruise lines are allowing passengers to see popular destinations, like Alaska and Europe, in new ways and offering entirely new private island destinations or swanky clubs on lesser-known islands in the much-larger-than-you-think Bahamas island chain.

Cruisers can explore polar ports that were previously unheard of and rediscover ports in Mexico or Japan with more depth.

The following seven locales are Cruise Critic's picks for the top cruise destinations of 2020.

Cruising continues to be the best way to see Alaska, and as more visitors get this memo, Alaska's popular cruise ports are working with cruise lines to accommodate more cruisers through growth and change. Norwegian Cruise Line made major investments in Alaska in 2019, buying a significant piece of property in Juneau, and will be expanding Icy Strait Point with another pier and partnering with Ward Cove to build a two-berth dock in Ketchikan.

As more cruise lines join the cruising gold rush to the Last Frontier, they are also diversifying the ports on the lineup, with increased focus on smaller or less frequented ports, like Sitka. For example, newcomer Cunard will homeport some ships in Victoria, British Columbia, in 2020 rather than more-popular Vancouver.

Luxury lines with smaller ships, like Seabourn, are spending time in remote ports like Wrangell and the Inian Islands; even 930-passenger Viking Ocean Cruises ships call at Valdez and Yakutat Bay. Hurtigruten is debuting in Alaska in 2020 with cruises to the Aleutian Islands (Dutch Harbor, plus others); Crystal Endeavor, Crystal's first expedition yacht, heads to the Aleutians in 2021. Holland America Line is trialing a number of sailings on Maasdam this season that will not only stop in Misty Fjords (unusual for larger ships) but also explore the Inian Islands.

Into 2020 and beyond, polar regions continue to reign, with Antarctica at the top of the list.

Seven of the eight expedition ships launching in 2020 are built for the polar regions, with at least five that will be new to Antarctica next year, offering more choice than ever. Greg Mortimer might sound like the name of an insurance salesman, but it's the latest ship from Aurora Expeditions, touting whale watching and penguin colony visits. The ship will also offer the line's first-ever repositioning cruise for passengers from Antarctica via the west coast of Chile, through the Panama Canal, via the Caribbean then north to Greenland. Other itineraries include stops in Franz Josef Land, Svalbard and Jan Mayen Island, an infrequently visited Norwegian volcanic island.

Hurtigruten's Roald Amundsen became the first cruise ship ever to be christened in Antarctica (using a chunk of ice rather than the traditional bottle of Champagne) in November 2019. (Its sister ship, Fridtjof Nansen, debuts in 2020).

Another first, National Geographic Endurance will become Lindblad Expeditions' first ship specifically designed for polar cruising, and in 2020 the 126-passenger ship will sail throughout the Antarctic Peninsula, the Ross Sea ice shelf, Macquarie and the sub-Antarctic islands of Australia and New Zealand.

Japan-centric sailings have been ramping up over the past few years, but excitement is already building about the Summer Olympics in Tokyo, kicking off July 24, 2020. Anticipating the influx, especially by cruise ship, ports are upgrading terminals and updating infrastructure to accommodate cruisers.

Cruise lines are offering special Japan-only sailings, notably on big-ship lines like Royal Caribbean, Celebrity and Princess Cruises. Norwegian will introduce a new 14-day destination-immersive itinerary for 2020 onboard Norwegian Spirit (with an option to cruise during the Olympics). Azamara, Tauck and Oceania Cruises continue to offer popular around-Japan voyages, while new ships like Crystal Endeavor will debut with an expedition-style jaunt to Japan over 18 days and call at unique ports like Ogi on Sado Island.

Many of these itineraries, including those of Windstar's Star Breeze, feature a port of call in South Korea. The destination hasn't yet garnered enough cruise attention for a dedicated sailing, but ports like Busan, Incheon (Seoul) or Jeju Island are great additions to any Japan voyage. Landside, South Korea has permeated pop culture through film and K-pop music, increasing overall interest in the region. Follow the trend on a Japan sailing in 2020 and keep your cruise sights set on the Korean calls; they might increase over time.

Repeat cruisers might be surprised to see The Bahamas on a list of trending destinations, as Nassau and Freeport have been mainstays of cruise itineraries for decades. But, when Virgin Voyages' mogul Richard Branson touches down somewhere, it's worth paying attention. Upon Virgin Voyages' debut in April 2020, it will be calling on a private beach club on the island chain of Bimini within The Bahamas. The space is an exclusive enclave for Virgin cruisers, but Bimini, in general, hasn't received much, if any, cruise traffic until this point.

Also along the line of private ports, Ocean Cay MSC Marine Reserve will be a new island entirely -- located near Bimini -- when it debuts in December 2019. MSC Cruises is transforming the island, which was built on a former sand excavation site, into an eco-reserve and port of call for four of its ships in 2020. And, passengers are still buzzing about upgrades to longtime private islands, such as Royal Caribbean's completely revamped Perfect Day at CocoCay, which launched this past spring, and Norwegian's new Silver Cove private beach villas on Great Stirrup Cay.

Back in New Providence and Grand Bahama (where Nassau and Freeport are located, respectively), Victory Cruise Lines is calling on Freeport for the first time in 2020; Bahamas Paradise Cruise Line will introduce Nassau to its sailings from West Palm Beach.

In Europe, itinerary-headlining destinations are feeling the weight of overtourism -- too many visitors arriving at once and detracting from the charm and atmosphere that attracted tourists in the first place. Cruise lines are doing their part to protect popular ports by diversifying their itineraries and introducing new and lesser-visited ports as an alternative, especially in Italy and Montenegro.

Calls to Balkan country Montenegro -- just down the coast from Croatia on the Bay of Kotor and across the pond from Italy -- are replacing increasingly popular Croatia (especially the walled port city of Dubrovnik). Kotor is a UNESCO World Heritage Site and provides visitors with strolling, shopping and history in the wake of Croatia's pending cruise ship caps.

Trieste and Ravenna are emerging as potential Italian alternatives to Venice, as the local government continues to threaten cruise ship calls. Although there's no true replacement for the Venetian canals, these cities open up the vastness of Italy -- beyond Florence, Rome and Venice -- for the chance to explore further by cruise ship. Trendsetting Virgin Voyages has announced its next ship, Valiant Lady, will call on Cagliari in Sardinia and a small port in Tuscany called Marina di Carrara.

Mexico is "coming back" for cruise ship visitors. Carnival is basing its newest ship, Carnival Panorama, on the West Coast sailing Mexican Riviera (Cabo, Mazatlan and Puerto Vallarta) itineraries. The cruise line is also investing in its port in Ensenada to bolster sailings there on short cruises from Long Beach.

The Yucatan Peninsula, which separates the Gulf of Mexico from the Caribbean Sea, is also popular in 2020. Increased cruise ship calls on the region's ports include visits to Progreso (outside of Merida) for Silver Shadow, MSC Armonia, Viking Sky and Costa Luminosa in 2020, and Disney Wonder in January 2021.

Victory Cruise Lines will sail its 202-passenger ships to the Yucatan Peninsula as part of a series of itineraries labeled "2020 Discover Beyond," cruising round trip from Cancun with a call in Progreso, a shoreside stay in Valladolid, and time at the Mayan ruins in Tulum and Chichen Itza. When Virgin Voyages debuts in April 2020, it's promising late-night stays in Cozumel that will allow passengers to spend time in Playa del Carmen with unique excursions to Tulum.

Whether it's on Holy Land, Middle East or Eastern Mediterranean sailings, the ports of Israel and Cyprus are finding their way onto more cruise itineraries in 2020. Royal Caribbean's 2,750-passenger Jewel of the Seas recently called on Limassol, Cyprus and later Haifa (Tel Aviv) in Israel; in 2020, Regent Seven Seas, Silversea, SeaDream and CroisiEurope's new oceangoing vessel, La Belle des Oceans, will also call on Cyprus and Israel. New for 2020/2021 are Celestyal Cruises' short breaks from Cyprus to Athens and the line's first call on Israel as part of their two-week immersive cruises.

The trend is no accident. The Cyprus Ministry of Tourism, in conjunction with Israeli authorities, has been working to promote the country's cruise ports, and cruise travelers looking for a new take on the Med are signing up.