You may also like
Dismiss
If You Get Sick on a Cruise: What to Expect
Dramamine vs. Bonine
What to Pack for a Voluntourism Cruise
Can I Cruise While Pregnant? What You Need to Know
8 Best Ways to Cure a Cruise Hangover
What Is Mal de Debarquement Syndrome?
Best Travel Medicine Kits for a Cruise and What to Put in Them
5 Cruise Health Myths Debunked
Q&A With Bug Naked, Cruising's Most Famous (and Least Furry) Feline
Will I Have to 'Social Distance' on My Next Cruise? 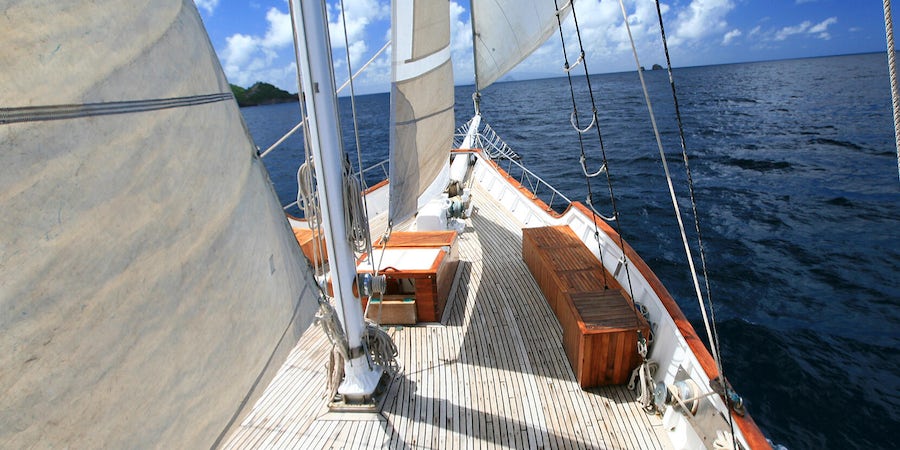 How to Prevent Seasickness on a Cruise

Avoiding Seasickness (Photo: Island Windjammers)
Cruise Critic
Staff
Seasickness is hardly fatal, but with symptoms such as nausea, stomach cramps and vomiting, it can certainly put a damper on your cruise fun. Luckily, cruise lovers have an array of options for seasickness prevention, from medicines and patches to Sea-Bands and even cabin booking tricks that can alleviate motion sickness. If you have a propensity to motion sickness or are concerned that you might develop symptoms, read on for a handy breakdown of what causes seasickness and the methods you can use to avoid it.

So What Is Seasickness?

Motion sickness is thought to be caused by the visual disorientation resulting from being on an object in motion (the ship) competing against our body's natural inclination for balance. Mal de mer, however, is not caused by choppy waters alone. Scientific studies have shown that some folks become seasick by suggestion. They simply convince themselves that being on a ship will make them ill. On the other hand, for those who can forget about it, it's often smooth sailing.

Some people have a genuine proclivity for motion sickness and will undoubtedly suffer more during rough seas. According to medical professionals, seasickness is more prevalent in children and women, (though children under 2 seem to be immune from the ailment). Of equally interesting note, elderly people are less susceptible.

Like it or not, seasickness medicine is your most reliable route to keeping the good times rolling on your cruise. You can choose from numerous options, including patches and pills available with prescriptions or over the counter.

The Seasickness Patch Is One of the Strongest Motion Sickness Remedies

One of the most widely recommended remedies is Transderm Scop, a scopolamine nausea patch applied behind the ear at least eight hours before exposure, with effectiveness for up to three days. Available only by prescription, the Scop is preventive, not a treatment, and can cause possible side effects such as dry mouth, blurry vision, drowsiness and dizziness.

Other prescription motion sickness remedies are available from a physician, including promethazine and ephedrine, which, when taken together, produce quick results as well as potential side effects such as sleepiness. Another option is suppositories administered by the ship's physician, which work magic for some people.

How Not to Get Seasick With Over-the-Counter Medicine

Over-the-counter medications like Dramamine, Meclizine (also known as Bonine) or diphenhydramine (commonly called Benadryl) can also help prevent or alleviate seasickness. On some ships these are dispensed freely or are sold in the sundries shop. Remember that the most common side effect of taking Bonine and Benadryl is drowsiness, and alcohol will exacerbate this. Both medicines are available in smaller doses for children, though you should speak to a pediatrician before administering either to your kids. (Learn the differences between Dramamine and Bonine.)

You Might Be Able to Prevent Seasickness With Drug-Free Remedies

If you don't like to take medicine, there are plenty of other options, if the numerous Cruise Critic boards' threads on seasickness remedies are any indication. From sea bands that help with vertigo sensations to strategic cabin booking, multiple options are available to nervous cruisers.

How Do Sea-Bands Work Against Seasickness?

Some cruisers swear that applying a Sea-Band wristband the minute you embark can save you from unwelcome motion sickness. The easy-to-wear, acupressure-inspired product has a plastic bead that presses against the Nei-Kuan pressure point located on the palm side of the wrist. Users say that it nausea and vomiting without any side effects. It comes in both adult and children's sizes and can be used by pregnant women. Sea-Bands are available without a prescription at major drug stores or on Amazon.

Use the Horizon as Your Personal North Star

To acclimate to shipboard life, you should spend as much time as possible out on deck once you’ve boarded, using the horizon as a point to maintain your equilibrium.

Booking an outside cabin in the middle of the ship -- the natural balance point -- is another option. Having a window will also give you a consistent view of the horizon point, which can help in avoiding seasickness (unless you find yourself in stormy waters with sea spume splashing against your window).

Other cruisers faithfully promote the benefits of ginger, which studies have found alleviates nausea associated with motion sickness. The root can be taken in various forms, including powder, tea, pill and candy. Some swear that eating green apples helps with nausea, and some ships offer plates of green apples and crackers on their room service menus.

Knowing how to prevent seasickness isn’t limited to pills, gadgets and natural remedies like ginger. A little pre-cruise homework can go a long way in keeping seasickness at bay.

It's not a bad idea to take only port-intensive cruises with fewer days on the open seas if you’re prone to motion sickness or worried about it. You should also avoid itineraries where the ocean is bound to be rough, such as North Atlantic crossings or the Caribbean during hurricane season.

Related: A Cruiser’s Medical Kit: Packing Prescription Drugs, OTC Medications and What to Leave at Home

Another wise option is to pick large, modern ships -- not a difficult proposition with the industry trending toward larger ships. Anyone who has sailed on a relatively new mega-ship, perhaps of 100,000-tons or more, knows that stabilizers are used when needed to provide the smoothest ride possible.

Remember that everyone reacts differently to the various remedies out there. It's on the cruiser to take part in a little research and self-experimentation, and one of the most useful places to start is the Ask a Cruise Question forum on the Cruise Critic message boards.