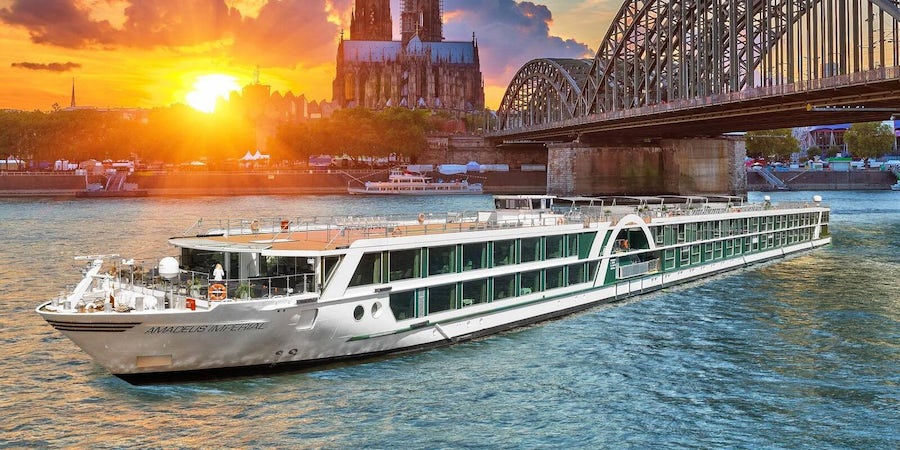 River cruises have been a popular endeavor for years now, and the latest crop of new river cruise ships slated for arrival in 2020 is no exception. River cruise ships big and small are debuting in North America, Europe and beyond -- and a few are even destined for some truly exotic locales.

One noticeable trend is that river cruise lines are branching out from European river cruising to more exotic, less-visited destinations, adding more or newer ships on those rivers. Two vessels (one for Tauck, one for Uniworld) are destined for Portugal's Douro River. One vessel is being refitted for the Po River in Italy. One will debut in Zimbabwe. One is coming to the Amazon.

Notably, two ships -- one for Uniworld and one for Viking -- will launch on the Nile River in Egypt, a destination that is slowly beginning to reemerge following political unrest in the country and surrounding area.

Here is the current list of river cruise ships slated to debut in 2020:

AmaWaterways' latest and greatest, AmaSiena, debuts in the summer 2020. The 156-passenger ship is a direct sister to AmaLea and AmaKristina (and back to basics for AmaWaterways after the double-wide AmaMagna debuted in 2019). Passengers can expect more of AmaWaterways' signature touches, like staterooms offering dual French and step-out balconies, contemporary design, and casually elegant public rooms and cuisine. AmaSiena will primarily be based on the Rhine.

Debuting on the Mississippi in August 2020, American Cruise Line's American Jazz builds on the successful formula that ACL has been cultivating for the past few years. One of the line's "modern" river cruise ships that shy away from the traditional paddlewheel design, American Jazz features ACL's distinctive bow-mounted gangway that enables passengers to go ashore in remote areas, along with a five-story glass atrium, plenty of balcony accommodations and a wide array of public rooms.

The line, which owns its own shipyard in Maryland, also has a second contemporary ship, American Melody, which will join American Jazz in late 2020. Exact details about the ship, including deck plans and renderings, have yet to be released.

Debuting in April, American Countess is American Queen Steamboat Company's newest river cruise ship. Sailing the mighty Mississippi, it was entirely rebuilt and reconstructed from an existing gaming ship to meet AQSC's exacting specifications. Expect the ship to offer the same kind of grand styling and lavish inclusions as the line's other vessels on the waterways of America. Things kick off April 5, 2020, with a journey from New Orleans to Memphis.

Setting sail in the Amazon, Aqua Expeditions' Aqua Nera will offer 20 lavish cabins spread across two decks along with indoor and outdoor public spaces, an outdoor cinemaand a top-deck plunge pool with private cabanas. Lavish colonial styling (including a games room with a pool table) adds a touch of uniqueness to this Amazon cruiser, which makes its debut in October 2020.

Strasbourg-based CroisiEurope debuts Zimbabwean Dream in April, sailing with just 16 passengers in comfortable surroundings on cruise-tour itineraries that include stops in South Africa, Botswana, Namibia and Zimbabwe. Expect the ship to cater to a wide array of French, English and international passengers like much of CroisiEurope's existing European river cruise fleet.

Tauck's newest five-star all-inclusive river cruise ship will enter service on the Douro River in April 2020. The 84-passenger ms Andorinha will mark the first time Tauck has operated river cruises in Portugal, after having successfully offered luxury river cruises throughout the rest of Europe for over a decade now.

Travelmarvel's newly built river ship will debut in April 2020. The 182-passenger Travelmarvel Polaris will be the Australian line's first to feature floor-to-ceiling panoramic windows in the restaurant, a new pub called McGeary’s Bar as well as a rooftop bar, terrace garden and heated whirlpool. The itinerary between Amsterdam and Budapest includes stops in the German ports of Dürnstein, Nuremberg and Miltenberg.

One of the first new river cruise ships to arrive in 2020 is Uniworld's S.S. Sphinx. Launching on Egypt's Nile River on January 4, 2020, the 236-foot long river cruiser features all French Balcony accommodations, two dining venues and a swimming pool. It will sail Uniworld's Splendors of Egypt & the Nile itinerary that operates round trip Cairo, replacing the current River Tosca.

Uniworld continues its quest to update its existing fleet and turn old vessels into "super ships" with the remake of River Countess, which will emerge in March as the all-new S.S. La Venezia. As with Uniworld's other conversions and refits, expect this one to be sweeping, with changes proposed to the ship's public rooms and staterooms that will truly make this vessel one of the most lavish and elaborate to sail Italy's Po River from Venice.

Uniworld is also debuting the S.S. Sao Gabriel on Portugal's Douro River in March 2020. Sailing Uniworld's 11-day Portugal, Spain & the Douro River Valley itinerary from Lisbon to Porto, the ship will offer larger and more elaborate suites than the company's current Douro ship, Queen Isabel (which will be withdrawn from service next year).

Built from the ground up for Viking Cruises, the all-new Viking Osiris brings Longship-style river cruising to Egypt's Nile River (the ship that Viking added to the Nile in 2018 was a redo of an existing ship, not a new build). The 82-passenger ship sails Viking's 12-day Pharaohs and Pyramids itinerary and debuts in January 2020. The ship will continue to offer Viking's popular Scandinavian styling and signature features like the Aquavit Terrace.

Viking is also making a push in 2020 to update its fleet on France's Seine River. Four new slightly modified Longships -- Viking Fjorgyn, Viking Kari, Viking Radgrid and Viking Skaga -- are smaller than a typical European river cruise ship and carry fewer passengers so they can dock in the heart of Paris (previously, Viking had to dock its Longships outside the city center, a competitive disadvantage). The ships will be outfitted with all the standard Viking hallmarks passengers have come to expect, including the trendsetting Aquavit Terrace and a full complement of true suites.

Finally, Viking will debut two new Viking Longships on the Rhine next year: the 190-passenger Viking Gersemi and its sister, Viking Hervor. Both set sail in March 2020 on Viking's classic Basel–Amsterdam itinerary, along with special sailings to commemorate the 2020 Oberammergau Passion Play.