You may also like
Dismiss
Caribbean Cocktails Checklist: Take a Drink Tour of the Islands
The Kentucky Derby Festival Great Steamboat Race
The Beach Club at Bimini: What You Can Expect From Virgin Voyages' Private Experience Ashore
Are Dolphin Tours Humane?
Cunard Menus for 5 of the Line’s Best Dining Venues
Cruise Vision 2020: The Future of Cruising in Australia and New Zealand
The Most Exciting Ship Launches in 2020
Latter Day Saints (LDS) Book of Mormon Cruises
New Cruise Ships 2020
11 Virgin Voyages Activities That Will Make Your Social Feed Shine 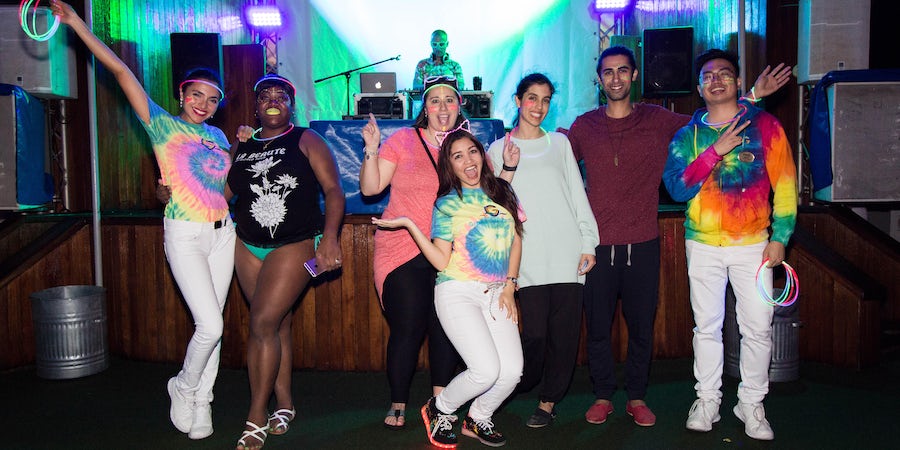 For a growing number of people, long weekends are a great excuse to leave their troubles behind at the shore and enjoy the ultimate party weekend onboard a cruise ship.

Not only do short cruises leaving from U.S. ports tend to be budget-friendly but they also generally appeal to millennials and anyone looking for an easy way to escape the grind and let loose, while still getting back to work Monday (or maybe Tuesday).

We researched three- and four-night cruises leaving from U.S. ports in Florida, Texas and California to come up with this list of the best party cruise ships that are so good, you'll probably come up with a few creative excuses for playing hooky from work by the time you've finished reading this article.

The quintessential cool party cruise, adults-only sailings on Virgin's Scarlet Lady promise legendary musical entertainment. Artists, like Mark Ronson and Diplo, are expected to join some of the voyages starting in 2020, which include stops at Virgin's private island resort, Bimini. There's an onboard tattoo studio, drag queen brunch and "Scarlet Night," which is billed as the "party to end all parties" (bring your red attire).

Featuring a 17-degree-Fahrenheit ice bar, Norwegian Breakaway features some of the coolest drinking establishments at sea. Other fun spaces include Syd Norman's Pour House (including live rock band performances), Jimmy Buffett's Margaritaville at Seaand Bliss Ultra Lounge, with a spacious, glassy dance floor just begging for you to showcase your best moves. Don your best white duds, grab a light stick and head to the ship's legendary adults-only White Hot Party known as H2Glow at Spice H2O, a space just for grown-ups both day and night.

Related: Best Cruises for Singles Over 40

Grand Celebration, along with sister Grand Classica, offers two-night Bahamas itineraries throughout the week, year-round -- the perfect weekend getaway. These cruises tend to appeal to younger travelers -- 20- and 30-somethings -- plus Florida locals. Take a long weekend and extend your stay with an all-inclusive package at a resort (including unlimited food, drink and resort activities) for a mid-cruise land-based stay.

Both ships offer a half-dozen bars that stay open until the wee hours, slinging tropical drinks like specialty mojitos, plus nightclubs that start the party early, from 6 p.m. with dance-friendly tunes. The line is also known for booking big musical acts throughout the year such as the Marshall Tucker Band, KT Tunstall and Tito Puente Jr. -- check the entertainment schedule in advance.

Carnival's Fantasy-class ships are legendary for their free-wheeling, fun-loving atmosphere, so much so that some Southern California locals dub Carnival Imagination the "booze cruise." Value-priced, shorter sailings earn this ship plenty of repeat customers among young people looking to escape the grind of LA life. Adult-themed comedy shows and an adults-only sun deck are draws, plus Imagination's 10 bars and lounges (including the super popular Alchemy Bar) that stay open late so that people on the shorter itinerary can make the most of their long weekend getaway.

5. Royal Caribbean's Enchantment of the Seas

Though Galveston-based cruises don't have the hard-partying reputation of those on the coasts, if a party is what you're looking for, you'll find it on a short-but-sweet jaunt on Enchantment of the Seas. Eight bars and lounges, plus nine pools and hot tubs (including an adults-only Solarium), are among some of the amenities to help you unwind. If you're feeling a bit more active, take your partner for a spin salsa dancing at Boleros, bounce on the bungee trampolines or get soaked on the Splash Deck. Late-night dance parties often take place on the pool deck under the stars.

You already love to brunch so hard, so why not do the at-sea version, with Carnival's Seaday Brunch, filled with all your favorite brunch bites and drinks? Carnival Fantasy, the oldest ship in Carnival's fleet, is still going strong on short cruises. It features the RedFrog Rum Bar, with rum drinks available by the pitcher, and giant onstage battles of Connect 4 and Yahtzee. Mobile-style Mardi Gras parties (complete with beads) are also occasionally on the agenda, and late-night dancing at Electricity Nightclub gets started at 11 p.m.

Signature drinks: Order a round of beer or margaritas for your group at RedFrog Rum Bar with the 101-ounce "The Frog Likes to Share" tube, pitchers or yards.