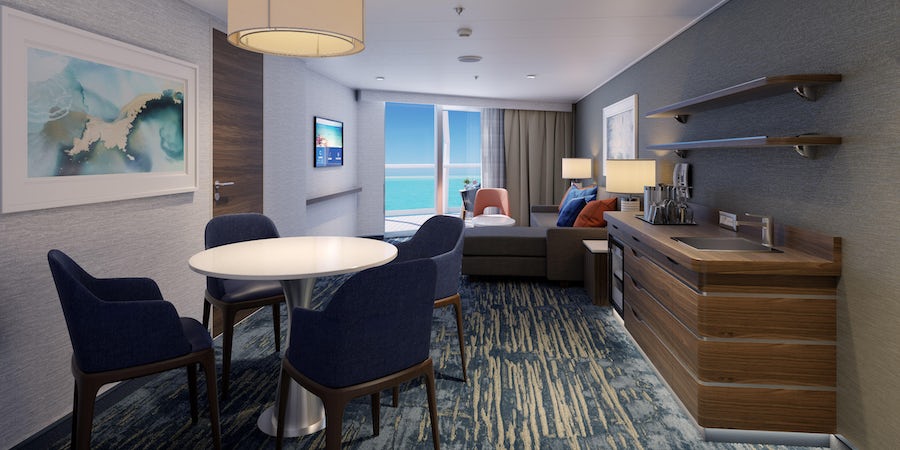 When Carnival's next new ship, Mardi Gras, arrives in 2020, it might be a shock to many past Carnival Cruise Line passengers. The ship will be unlike anything the line has ever launched before, and people can't stop talking about it.

While much of the buzz has been about Carnival Mardi Gras having a roller coaster, there's so much more that will be new and different. The 5,200-passenger ship will be the largest in the Carnival fleet, the first to have a painted hull (navy blue with red and white accent stripes), and the first to feature themed zones, each packed with dining, bar and entertainment venues.

Not convinced Carnival's newest ship will be right for you? Cruise Critic has rounded up some of the most exciting things you should know about it.

Here are nine reasons to look forward to Mardi Gras in 2020.

Just when cruisers thought they'd seen it all, Carnival announces it's putting a roller coaster on a cruise ship. BOLT, an attraction modeled after a traditional coaster, will offer nearly 800 feet of twists and turns, and drops nearly 190 feet above sea level with riders reaching speeds of nearly 40 miles per hour. Unlike traditional roller coasters, BOLT riders can control how fast they go as each "coaster" holds one or two people only.

Who knew Shaquille O'Neal was such a momma's boy? Turns out the 7-foot-1 NBA Hall of Famer (and Carnival's Chief Fun Officer) enjoys cooking with his mom and the two have teamed up to create Big Chicken Restaurant. There's already one in Las Vegas, and when Mardi Gras launches in 2020, it, too, will boast the big guy's delicious breakfast, lunch and dinner menu items. Even better, the venue will be complimentary!

Not just a simple pleasure, glass shower doors are a luxury for any cruiser who's ever felt the gradual creep of a plastic shower curtain. On Carnival Mardi Gras, every single cabin will have showers with glass doors. But those aren't the only cabin improvements you'll find on Mardi Gras. Regardless of room category, cruisers will find sofas that easily flip into a twin-sized bed, an abundance of outlets and USB ports (both bedside and on the vanity) and more storage space.

Cruisers will be able to let the good times roll in Mardi Gras' French Quarter, one of six themed zones onboard. Styled after New Orleans (in)famous district, the French Quarter on Mardi Gras will be lined with bars, restaurants and music venues, including a jazz club offering live entertainment and handcrafted cocktails.

Other zones will include Summer Landing, where cruisers will find an expanded Guy's Pig & Anchor Smokehouse Brewhouse, this time with a stage for live music performances; Grand Central, which replaces the line's traditional atriums; La Piazza, an Italy-inspired area with the line's popular Cucina del Capitano restaurant and an all-new Mediterranean seafood eatery; the Lido; and the Ultimate Playground, where you'll find the BOLT coaster and the largest water park in the fleet.

Bam! So sayeth Emeril Lagasse, whose Emeril's Bistro 1396 will be the star fixture of the ship's French Quarter, as befitting its Cajun cuisine, of course. The 66-seat eatery will offer all-day dining with items like shrimp and grits for breakfast, poboys and muffuletta sandwiches for lunch, and ceviche, Andouille sausage gumbo and jambalaya for dinner. We haven't seen the full menu yet, but we're hoping the dessert menu has beignets.

Suite-loving cruise passengers who have been waiting for Carnival to offer a more robust range of suite cabins and perks will love Loft 19, an exclusive enclave chockfull of Carnival Excel suites and suite-passenger-only amenities. Perched high atop Mardi Gras, Loft 19 will have a full-service bar, a pool and cabanas (stocked with beverages, chilled towels, fresh fruit and lunch delivery) available for rent. Thirty-two Carnival Excel suites (subdivided into four subcategories) will have access to the space. Of these, two Presidential Suites will be the largest suites in the Carnival fleet and will have features including an outdoor hot tub and shower on the expansive balcony, living/dining rooms and multiple bedrooms.

Fans of food trucks and street kiosks will enjoy strolling through the open-air Street Eats onboard Carnival's Mardi Gras. The complimentary, grab-and-go venue will feature three themed kiosks, one each for fried, steamed and plancha (skillet) food items representing a variety of global cuisines. Among the options on offer will be empanadas and falafel (fried); bao buns and shumai (steamed); and kebabs and satay (plancha).

When it launches in 2020, Carnival's Mardi Gras will be one of just a handful of cruise ships powered by liquefied natural gas, more commonly referred to as LNG. Without going into complicated scientific details, LNG is the cleanest burning fossil fuel available to the cruise industry, leading to less emissions from cruise ships that use it. By the time Mardi Gras debuts, Carnival will have also made progress in its quest to cut single-use plastics, so it'll be that much greener.

Related: What Is LNG Gas, and What Are LNG-Powered Cruise Ships?