You may also like
Dismiss
10 Reasons to Take a Cruise over a Land Holiday
The Club By Jools on Saga Cruises
17 Cruises That Include Alcohol in Your Fare
Taster Cruises: What They Are and Where to Take Them
Pictures of Sky Princess
The Most Exciting Ship Launches in 2020
New Cruise Ships 2020
MSC Cruises FAQ
Short Cruises on Queen Elizabeth: 10 Things You Need to Know
How To Cope With Cruising's Pause? Plan Far, Far Ahead 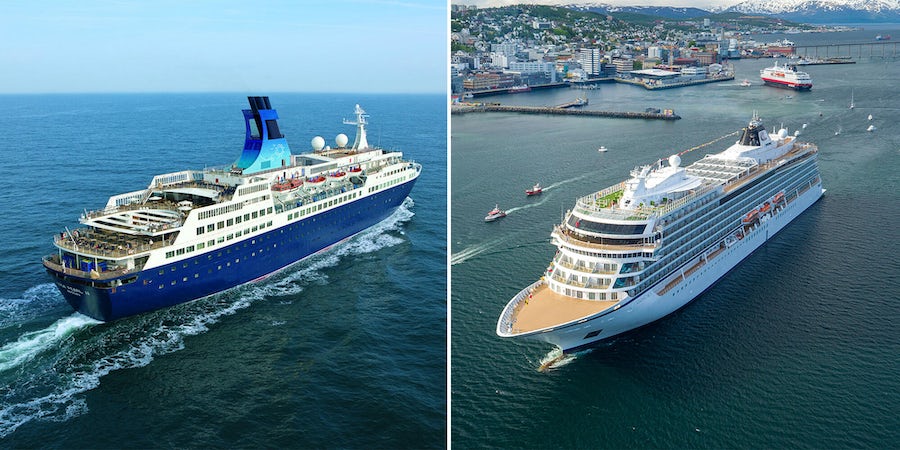 Over-50s specialist Saga Cruises and Viking’s ocean product have a remarkable amount in common. Beautiful, stylish new ships; all-balcony accommodation; included speciality dining; and a general avoidance of penny-pinching. Both, for example, offer free access to their gorgeous spas, and free Wi-Fi on board. Viking includes a shore excursion in most ports, and Saga offers all-inclusive drinks (Viking offers drinks at meals). Both lines operate mid-sized vessels; Saga's two newbuilds take 999 passengers each, while Viking’s ocean fleet take 930 each. Neither has a casino.

A significant difference between the two is who you'll meet on board. Both appeal to an older demographic but Saga's two ships, Spirit of Discovery and 2020's Spirit of Adventure, attract an audience that’s almost entirely British, with all activities and entertainment geared to British tastes. Viking has more international appeal, with a strong North American market, and its onboard experience reflects this.

You really won’t go wrong with either line; both offer a cruise experience that gives some of the luxury lines a run for their money. But for the subtle differences, read on.

Also offers new ships but for a more international audience. There’s a lower age limit of 18, although most passengers are mature travellers.

Neither cruise line caters for children. On Saga, the minimum age is 40 (if travelling with a companion over 50) and on Viking, 18.

Related: What to Expect on a Cruise: Onboard Spending

Prefer the company of mainly Brits, with British-themed entertainment, food and drinks and nightly ballroom dancing? Saga should work for you.

If you’re after a more international mix and like the thought of cool, Scandi-themed design and marginally more high-brow entertainment, try Viking.