You may also like
Dismiss
New Cruise Ships on Order
Top 8 Specialty Restaurants on UK-Based Ships
12 Things Not to Do in Your Cruise Room
Coronavirus 2022: What Ports Are Closed to Cruise Ships?
6 Tips for Booking a Shore Excursion During COVID-19 (Including Omicron)
Just Back from the Arctic with Hurtigruten: Following in the Footsteps of Susan Calman
I'm On A Luxury Cruise During Omicron -- and So Far, Things Are Going Great
The 673-day Cruise Industry Battle With The CDC Over Its COVID-19 Conditional Sail Order
18 Adventure Activities You Didn't Know You Could Do on a Cruise Ship
Norwegian Cruise Line Holdings Joins CDC's Voluntary Program Governing Cruise Ships; Will Other Lines Follow? 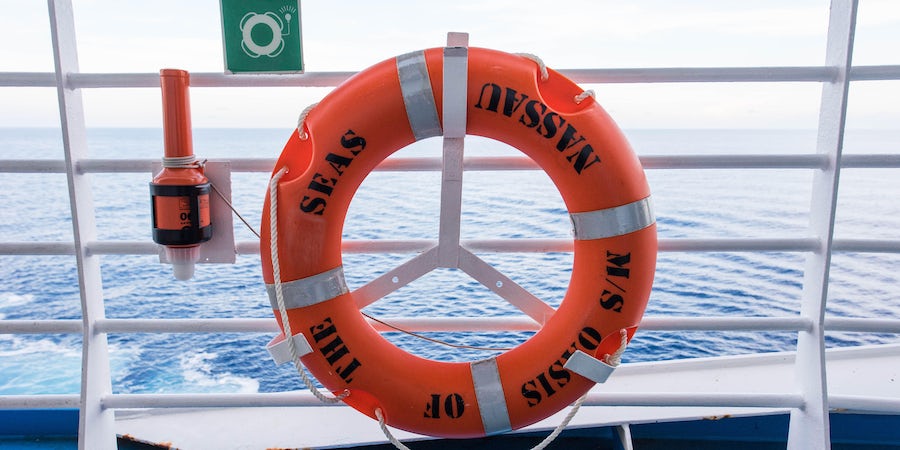 It is hard to imagine how someone could fall off a cruise ship. The railings are so high, and there are always people around who could prevent a misstep. But overboards do happen; there are those who intentionally end their pain, and there are those who are reckless, careless and silly in their behavior, never believing they can fall overboard. However, when it does happen, what is involved and how does the crew feel when dealing with such an emergency?

How Does Someone Fall Off a Cruise Ship?

The number one question asked is, "How in the world does someone fall overboard?" There are four answers: alcohol/drugs, suicide, doing something foolhardy or genuinely by accident. Going overboard is an act that cannot be predicted nor can it be stopped once in progress.

When I was a crew member with Celebrity Cruises, an 18-year-old passenger went overboard. Worse, he was physically in the captain's hands at the time. The captain had noticed the passenger was acting strangely and as he grabbed hold of the young man's arms, just to talk with him, the passenger pulled away, ran out the door and leapt over the railing. The captain yelled, "Man overboard, turn starboard," and the ship was turning as the jumper hit water.

After lifeboats were lowered a search began, and a nearby vessel from Norwegian Cruise Line fortunately found him with a spotlight and took him aboard. He was lucky by all accounts: A somewhat calm sea, clear skies and a full moon greatly improved his chances of being rescued. And his reason was, of course, the first of the four I mentioned; he'd taken drugs and alcohol that made him hallucinate that the ship was in a mutiny situation.

Another overboard that got a lot of press was when a 20-something man and a woman fell off Princess Cruises' Grand Princess in the Gulf of Mexico after a night of partying -- and survived. A friend onboard during that cruise told me that he was "baffled as to how anyone can be out in the water four-plus hours and survive without a life jacket. Looking out into the eerie ... dark waters, I cannot even imagine what must go through one's head as your ship is sailing away from you and there is nothing but water. These are two very fortunate people who, I hope, can realize the magnitude of what happened and will learn just how meaningful the rest of their lives can be."

When passengers engage in reckless behavior that results in an overboard, it's not only dangerous to them, but creates problems for the ship and the entire cruise industry. As one ex-cruise director told us, "To accidentally fall overboard is usually due to alcohol and then the press enters, putting the cruise industry in the cross hairs ... turning it into bad publicity for us as a whole."

However, partying is not the only cause of overboard situations. A friend who works as a doctor onboard ships tells me he's experienced seven instances in which passengers have gone overboard. And get this: None of them were alcohol or drug related! One fell off the ship when he lost balance standing on a table while the ship was full speed ahead -- he survived. Two separate incidents occurred while people were taking pictures on the pier, backed off and fell between the ship and the pier (perhaps the term should be "overpier"); both survived, amazingly, without being squashed. Another was a staged event for personal gain, and the last two were successful suicides.

"As you can see it isn't always fun," says a ship's captain. "There is something about ships that sometimes causes people to check their brains at the pier -- and they reclaim them only after they disembark."

What Happens When Someone Falls Overboard?

The whole ship is involved when such an event happens. Several life ring buoys must be thrown to offer the person at risk a floating device, hoping the victim can reach one if he has not already been injured or pulled under the ship.

The vessel must turn back, find the correct position, stop engines and lower lifeboat rescue squads. A request is sent to other ships within a 30-nautical-mile radius to aid in search and rescue. The Coast Guard might be called to use a low flying helicopter or plane to scan the water. Both crew and passengers are asked to keep lookout in hopes of spotting a tiny speck bobbing in the sea waters.

There is no preset time limit to search. The captain uses his discretion and all the tools available to him. As long as there is hope, the search continues. Whether the person lost at sea is from a cruise ship, military ship, fishing boat or even an immigrant journey craft, marine vessels must follow

referring to SAR (Search and Rescue) and SOLAS (Convention for the Safety of Life at Sea).

The Impact on the Crew

I asked crew members on Princess, Royal Caribbean, Celebrity, Crystal and Cunard for their feelings about these incidents. Putting it bluntly, it puts a damper on what should be, for passengers, a fun-filled and supposedly stress-free vacation -- no matter how it turns out. And it's no fun for crewmembers, either. If a person survives, the atmosphere is uplifted and there is cause for celebration. But sometimes the news is heartbreaking.

A butler told me that when he has experienced an overboard, he feels sick inside, dizzy and has to really push to work as he tries to figure out how anyone could take their life. A waiter remembers those at his table drinking heavily; when one later fell off the cruise ship, he felt that he should have told them they were drinking too much and to be careful. He did not feel it was his fault, as they had been drinking prior to dinner, but he will always feel hollow inside as he didn't try to stop them. Crew has to come to terms with these episodes while still doing their jobs with an outwardly cheerful attitude.

Once, onboard Celebrity Millennium during New Year's Eve celebrations, a crew member advised a friend that his personal situation was too much for him. Dressed in black, he handed over his wallet, then disappeared. A thorough ship search was conducted, and the crew presumed he jumped. The ship began search and rescue procedures. The captain refused to give up without finding him. We spent every sunlit hour, assisted by a Coast Guard plane, searching. The crew member was never found.

We were all hurt. We asked ourselves -- how did we miss the signs? It took months to get over not just the hurt but also the anger. He had put his family and the crew in turmoil, not to mention the cost of changing the itinerary and the effect on the passengers' emotions during their vacations.

The price paid by the crew and ship is nothing compared to one who has lost his life, for sure. Yet when someone falls overboard, the repercussions extend far beyond the personal safety of the person who fell. Not only are lives at risk (not just the victim but also the rescuers), but a huge amount of money can be spent on rescue operations and fuel, stress levels sharply increase for both passengers and crew, and cruises can be delayed. It's a situation no one wants on their cruise.