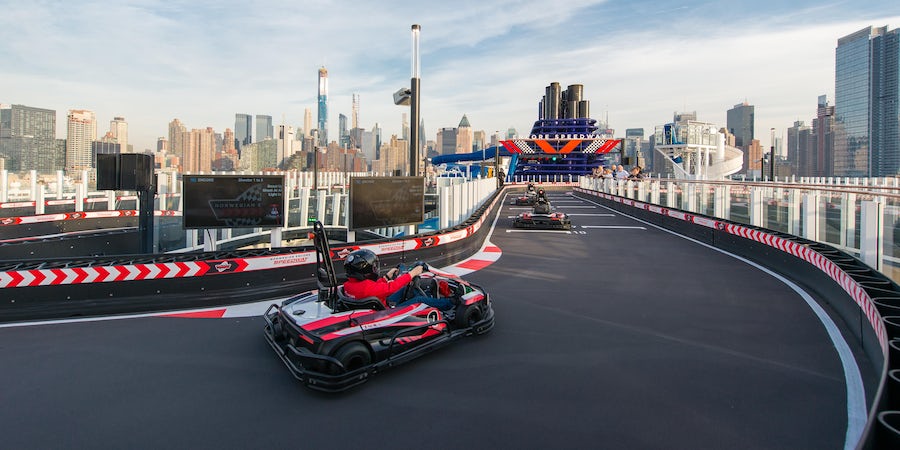 Cruise Critic gathered everything you need to know about these three ships into one place so you can compare them and figure out which one is right for you.

Sky Princess, Norwegian Encore and Carnival Panorama are all mega-cruise ships, with Norwegian Encore the largest of the three measuring 169,145 gross tons and holding 3,998 passengers at double occupancy.

Sky Princess and Carnival Panorama aren't much smaller; Sky Princess comes in at 141,000 tons and holds 3,660 people at double capacity. Panorama, which is even smaller in terms of gross tonnage (133,500 tons), holds more people (3,960) than Sky Princess and nearly as many as Norwegian Encore. That makes it the most crowded (in terms of people per square footage) of 2019's new ships.

Despite being the smallest ship of the three (though not by a lot), Carnival Panorama has the most dining options onboard -- 15 venues. Compare that to 14 on Norwegian Encore and 13 on Sky Princess. Cuisine styles you'll find across the three ships include Italian, Asian, steakhouses and seafood spots, with venues that range from grab-and-go to casual sit-down and date-night fancy. Norwegian Encore and Carnival Panorama also both offer barbecue and Mexican joints.

All three new ships feature main dining rooms and buffets. Beyond those standard dining venues, Carnival Panorama leads the pack when it comes to the number of lunch options included in the cruise fare, with five additional eateries offering complimentary afternoon grub. At dinner, Panorama only has two free specialty spots open. On Sky Princess, cruisers can find four free spots, open for both lunch and dinner, and on Norwegian Encore there is only one non-MDR free food option, open for lunch and dinner.

Of the three ships, only Norwegian Encore and Sky Princess debuted new eateries -- an at-sea version of the land-based upscale Italian Scarpetta chain called Onda by Scarpetta on Encore, and a casual French bistro with a menu from a 3-Michelin starred chef called La Mer and casual raw bar called Ocean Terrace on Sky Princess.

Only Norwegian Encore has a dining venue reserved exclusively for suite passengers, while Sky Princess and Carnival Panorama each have a dining venue dedicated to Chef's Table experiences.

When it comes to outdoor fun, Norwegian Encore and Carnival Panorama lead the way with plenty of top deck action. Whereas all of it is free on Panorama, most of the action on Encore comes with a surcharge. Panorama, for instance, has the SkyRide, SkyCourse ropes course, SportSquare recreation area and a mini-golf course, all of which are free to use. Encore has a large and thrilling electric go-kart race track as well as a day-to-night, Atlantis-themed laser tag arena. Both cost money to use and require advance reservations.

With that said, both Encore and Panorama have complimentary water parks with water slides; Encore, additionally, has a kids water park. Both also have two swimming pools, while Encore has a third for the exclusive use of suite passengers and Panorama has a third that can only be used by cruisers staying in Havana Cabanas.

Sky Princess, meanwhile, offers a traditional basketball/volleyball/pickleball sports court and a small mini-golf course, along with four pool options including one for adults 18 and older. Another adults-only area, the Sanctuary, comes with plusher loungers -- and a surcharge.

Norwegian Encore and Carnival Panorama also both offer sun deck areas for those 18 and older, both without pools. The Serenity Deck on Panorama is free to use, while the two-deck Vibe Beach Club can only be accessed by purchasing a full-cruise pass.

When it comes to bars and lounges, all have the same standards (atrium, casino and pool bars) but each new ship has a few standouts.

The only ship with a new space onboard is Sky Princess, with its Take Five jazz lounge. Nights here are themed (Harlem, Big Band, Women of Jazz, etc.), while daytime classes get you ready for a night of dancing. Another highlight on Sky Princess is Good Spirits, a cocktail bar where showy drinks take center stage. Cocktails are also the specialty drink at Alchemy Bar on Carnival Panorama; this Carnival favorite sees bartenders don pharmacist lab coats and whip together drinks to fix what ails you.

Wine-lovers will want to check out either Norwegian Encore for The Cellars Wine Bar or Sky Princess for Vines, while beer-lovers will want to look at Carnival Panorama for Guy's Pig & Anchor Bar-B-Que Smokehouse & Brewhouse, which brews up a small selection of craft choices onboard. For a much larger selection of brews, Norwegian Encore's The District Brew House has one of the biggest beer taps at sea.

Cruisers afraid to miss their favorite teams in action will find sports bars on Carnival Panorama and Norwegian Encore, but not Sky Princess.

Sky Princess, Norwegian Encore and Carnival Panorama all offer standard cabins in inside, outside and balcony categories, but each also offers a few unique accommodations.

Suite cruisers will find the most interesting options on Sky Princess and Norwegian Encore. The former has the line's largest-ever suites, though there are just two of them. The Sky Suites are approximately 1,873 square feet, feature massive balconies with 270-degree views and come with a slew of perks. Inside, each suite has two bedrooms, a living room, two bathrooms and a dining area with a skylight.

Norwegian Encore features the cruise line's ship-within-a-ship suites enclave, The Haven, which has its own swimming pool, restaurant and lounge. Cruisers staying in The Haven, which features suites ranging in size from 324 to 1,458 square feet, also get a range of perks including several all-inclusive packages.

Families with kids should check out the Family Harbor section of cabins on Carnival Panorama, a keycard-accessible area specifically designed for families, with rooms that can hold anywhere from two to five people, and include access to the Family Harbor Lounge for daytime play and casual buffet breakfasts. Panorama also has Havana Cabana rooms, which come with semiprivate patios rather than balconies.

The largest new attraction at sea in 2019 is on Carnival Panorama, which debuted the Sky Zone trampoline park, a 3,000-square-foot space with 12 lanes of trampolines, a balance/jousting beam and Sky Ladder climbing apparatus.

Less active, but no less fun, is the Galaxy Pavilion virtual reality arcade on Norwegian Encore. Here cruisers can soar through the air, shoot at zombies or zip along a variety of roller-coaster tracks without ever risking life or limb.

On the theater side of things, Norwegian Encore features the first at-sea production of "Kinky Boots," while both Sky Princess and Carnival Panorama introduced new-to-the-fleet song-and-dance productions.

Panorama also has the line's popular The Punchliner Comedy Club with both family-rated and adults-only shows in the evening and late night, while Encore features adult comedy in the Social Comedy & Night Club. Encore also has The Beatles-inspired The Cavern Club with attendant The Beatles tribute band.

While all three of 2019's new ships have robust kids' and teen's clubs, as well as late night group babysitting, Carnival Panorama and Norwegian Encore are the most child friendly with a larger selection of family-oriented spaces, cabin choices and activities. (With that said, Sky Princess does offer two-bedroom suites with room for up to eight people.)

Carnival Panorama, in particular, has lots to offer families from the Family Harbor section of cabins (complete with Family Harbor Lounge) to the line's Seuss at Sea partnership and attractions like Build-A-Bear workshop and the ZSpa teen spa program.

Norwegian Encore is the only ship with a space for kids under 2 to go, though they must be accompanied at all times by a parent.

A quick snapshot of the itineraries that the three new ships are offering reveal the following highlights:

Sky Princess was the only one of 2019's new cruise ships to begin its year in Europe, sailing a short season of weeklong Mediterranean voyages before it headed across the Atlantic to Fort Lauderdale. From here, the ship is primarily operating weeklong Caribbean cruises. In May 2020, Sky Princess returns to Europe for a series of 10- and 11-night Scandinavia itineraries, before returning yet again to the United States for a short series of Canada and New England sailings from New York City.

Norwegian Encore kicked off its inaugural year with a winter season of cruises to the Eastern Caribbean from Miami, which will be followed by a season of Bermuda sailings out of New York City. In the fall of 2020, Encore will offer a very short season of Canada and New England sailings before heading back south for another winter season of Caribbean sailings.

Carnival Panorama started its inaugural season on the other side of the United States, from the cruise line's homeport of Long Beach, California, where it offers a variety of Mexican Riviera voyages through the end of 2021.