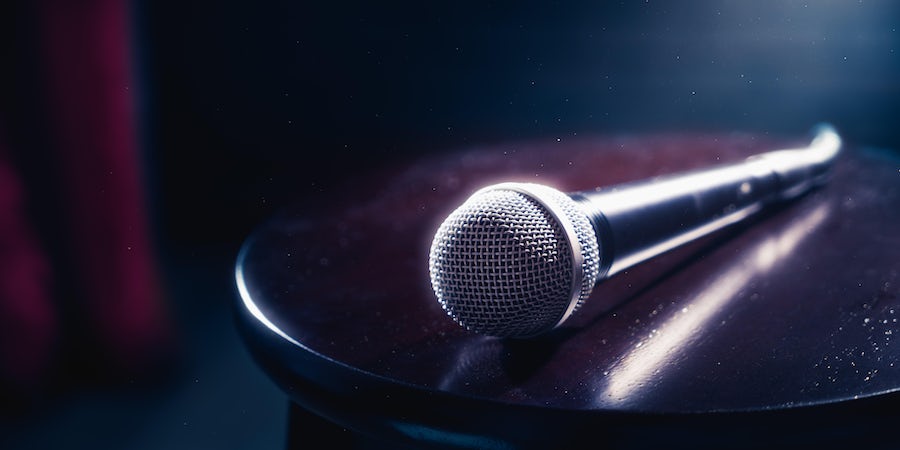 Stand-up Comedy Cruises (Photo:Fer Gregory/Shutterstock)
Sally Macmillan
Contributor
Comedy cruises are hugely popular with Aussie cruisers and P&O has really cornered the market with its short-break three-day comedy cruises and Big Laugh Festivals at sea. Who can you expect to see on stage and around the ship on an incredible selection of comedy cruises in Australia and New Zealand in the next couple of years? Meet some of the much-loved performers who regularly pop up on cruises Down Under.

A regular at P&O's Sit Down Comedy Club for several years, Bev found her comedy calling when she was 10. She inherited her dad's talent for remembering jokes and kept her classmates entertained as the class clown. Bev's career took off after she moved to Melbourne, where she honed her skills in clowning and improvisation workshops before taking her stand-up routine to comedy clubs around town and then to Brisbane and Sydney. You may well recognise Bev from her TV ads (busting out in Berlei's Uplifting Tour of Australia, for one), opening the worldwide sensation Puppetry of the Penis shows or guest appearances on Beauty and the Beast. But even if you don't know her from a bar of soap, Bev's full-on, non-stop live sets are famously bold, brash and bawdy.

Not only is Kat a talented, engaging comedian, she is an ABC Local Radio host and reporter, university lecturer, MC and public speaking guru -- she has taught thousands how to master a skill many of us regard as scarier than dying. Over the past 20-odd years she's shared the stage with the world's best comedians (Stephen K. Amos, Steven Wright and Dave Hughes to name a few) in Australia and Canada and is a favourite performer on P&O's comedy cruises. Kat and her husband, Stav Davidson, collaborated on the show He Said, She Said, as well as producing their adored daughter together. Kat's workshops on P&O's comedy cruises are fun (naturally), educational and not to be missed if you fancy trying out your own jokes in front of a live audience at the Comedy Gong Show.

This popular South African comedian arrived in Australia in 2016 and moved smoothly into headlining and hosting at the best comedy clubs in the country. Dusty has been strutting his stuff at Carnival Spirit's Punchliner's Comedy Club for a couple of years now and is renowned for his free-associating, high-speed sets. He says the combination of relaxed and ready-to-laugh crowds packing out Punchliner's each session and a club that is set up to give stand-up comedy the optimal space to thrive is perfect for his style of comedy -- he is free to take it to the limits (and he usually does). Dusty usually performs at least five different shows on a cruise and his fans love his work so much they flock to his land-based shows, too.

Mick has been in the spotlight for some 25 years, starting out as a guitarist in pub rock bands in the 1980s and segueing into stand-up at Sydney's famed Harold Park Hotel in the 1990s. Since then, Mick appeared and headlined at every major comedy venue in Australia, not to mention being a regular on the Nine Network's frequently politically incorrect The Footy Show. Mick has also toured his musical comedy acts around the world and among the highlights of his versatile career was performing for the Australian armed forces and federal police in East Timor, Cyprus and for 25 different nationalities in The Sinai, Egypt. One of the best on the circuit, Mick's comedy-cruise shows appeal to everyone from teens to seniors -- P&O passengers can never get enough.

The Haiti-born comedian was raised in Miami, Florida, and has been performing since he was 18. Ashley has toured extensively throughout his career, heading as far afield as Sweden, Denmark, Finland, the Netherlands, Norway and Australia -- and in 2015 found his sweet spot as one of P&O's top comedians. He was the opening act for international renowned US comedian Pablo Francisco; other notches on his belt include appearances in MTV's Sink or Swim, SiTV's Stand-up Comedy Showcase and in the Australian comedy movie How I Became A Vegetarian.

Anyone who titles his memoir The Crappiest Refugee has to have a well-developed sense of self-deprecating humour and Hung Le excels in the genre. The Vietnamese-born author, actor and all-round song-and-dance man left his homeland on the last day of the Vietnam War in 1975, at the tender age of nine. Hung Le and his family jumped onto a leaky prawn trawler on the Saigon River with only a box of dried biscuits and some seasickness pills and after surviving thirst, hunger and somehow cheating death, he became one of the first Vietnamese boat people to land in Australia. The firsts didn't end there. On Hung's first attempt at stand-up comedy, he not only headlined, he received an encore. His stand-up work and theatre shows are always edgy, satirical and political and his musical send-ups go straight for the jocular. Hung has performed on P&O comedy cruises since 2012 and he doesn't plan to jump ship anytime soon.