You may also like
Dismiss
Top 10 Seasonal Cruises for British Cruisers
6 Best Cruise Ships in London
Which Cruise Should You Take to Cuba?
Which Cruise Can You Book for $500 a Day?
The JoCo Cruise: All You Need to Know About This Nerdy Gathering at Sea
Pictures of Sky Princess
The Most Exciting Ship Launches in 2020
New Cruise Ships 2020
Chocolate-Themed Cruises: Who Offers Them and Where Do They Go?
The 10 Most Popular Episodes of “Cruising with Jane McDonald” 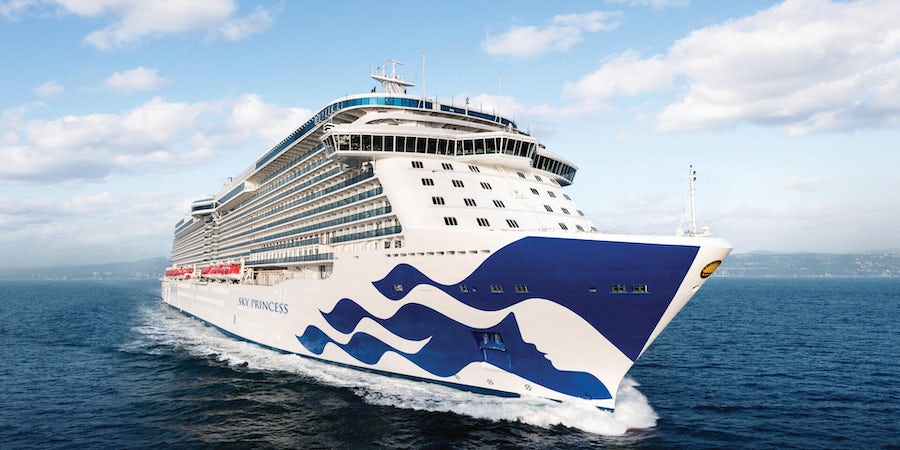 Where You Can Cruise to Onboard Princess' Newest Cruise Ship, Sky Princess

Sky Princess, the newest and largest vessel to debut for Princess Cruises, arrives this October. Purpose-built to take advantage of the line's MedallionClass technology and boasting the largest suites in the fleet, a new jazz club and a high-tech escape room with multiple outcomes, Sky Princess will be the line's most exciting ship. And Princess is offering a number of different ways to experience all the fun during its inaugural season.

Here's a look at the itineraries Sky Princess will sail between its debut and 2021.

Sky Princess makes its debut in the Mediterranean this fall, kicking off with a four-night preview voyage from Trieste, Italy to Athens (Piraeus), Greece on October 16.

After that, Sky Princess will embark on a short season of weeklong Mediterranean voyages that can also be combined to create longer 14- and 21-night itineraries. Weeklong runs include Athens to Barcelona, Barcelona to Rome (Civitavecchia) and roundtrip Rome.

To bring Sky Princess to North America, Princess is debuting a 14-night Spanish Passage itinerary that departs on November 17, 2019 from Barcelona and sails to Fort Lauderdale. Port of calls will include: Valencia, Malaga and Seville (Cadiz), Spain; as well as Lisbon and Madeira (Funchal), Portugal.

For those looking for an even longer inaugural experience, the 14-night Spanish Passage can be combined with the last seven-night Med cruise, which departs November 10 from Rome (Civitavecchia). The line has dubbed this longer sailing the Mediterranean Grand Adventure.

Other transatlantic crossings offered on Sky Princess in the coming years will include the 14-night Northern Europe Passage from Fort Lauderdale to Copenhagen on April 11, 2020, which is also available as a 17-night voyage ending in Warnemunde, Germany or a 20-night crossing ending in St. Petersburg, Russia.

Sky Princess returns to North America in August 2020 with a 26-night Northern Europe Grand Adventure that sails from Copenhagen to New York on August 24. This is also available as a shorter 15-night journey departing September 4 from Copenhagen with the difference being the former includes a weeklong cruise through Scandinavia.

In April 2021, Sky Princess will once again across the Atlantic. Three different versions of this Northern Europe Passage are available. The shortest is a 15-night sailing that ends in Copenhagen. A 21-night version concludes in St. Petersburg and a 26-night version ends, again, in Copenhagen.

Cruisers can sail back across the Atlantic one more time in 2021 on a 15-night voyage that departs Copenhagen on September 3, 2021 and finishes in New York. As with the other crossings, this sailing can be combined with earlier sailings to create 19- or 26-night voyages.

Two quick three-night inaugural voyages from Fort Lauderdale to the Bahamas will be offered in December 2019 for those who want to be the first to experience Sky Princess stateside. Departing December 1 and 4, these short getaways will visit Princess Cays in the Bahamas before returning to Fort Lauderdale.

Winter finds Sky Princess at home in the Caribbean, where it will operate primarily weeklong cruises out of Fort Lauderdale.

In the winter of 2020/2021, things diversify a bit more. First, Sky Princess will sail a one-off repositioning voyage from New York to the Caribbean, departing November 5, 2020, and calling on St. Maarten, St. Kitts and Aruba before ending in Fort Lauderdale.

The ship will then embark on a series of 10-night Southern Caribbean Voyager itineraries that run into 2021, with the majority offering port stops in Princess Cays, St. Thomas, Antigua, St. Lucia, Barbados and St. Kitts. These can also be combined with the line's 10-night Southern Caribbean Medley voyages (Princess Cays, St. Thomas, Dominica, Grenada, Bonaire, Aruba) to create a 20-night back-to-back journey with few repeated ports of call.

A handful of shorter voyages to the Caribbean running between five and eight nights are also scheduled for 2020 and 2021.

Sky Princess will head to Europe in early 2020, making its debut in Northern Europe in May. A series of 10- and-11-night Scandinavia itineraries are on offer, conveniently operating roundtrip from three embarkation ports: St. Petersburg; Copenhagen; and Warnemunde, Germany, the closest port to Berlin.

These itineraries include stops in some of the region's most popular ports of call including Oslo, Norway; Tallinn, Estonia; Helsinki, Finland; and Nynashamn, Sweden (for Stockholm).

Running first between April and August of 2020, these itineraries return again in the spring and summer of 2021.

The eastern coast of the United States and the Canadian Maritimes will be the home for Sky Princess during the autumns of 2020 and 2021.

For those with less time on their hands, a lone five-night itinerary, visiting just Halifax and Saint John, is offered departing on Halloween of 2020.

In 2021, this itinerary returns again, with two departures in September of that year and a single sailing in October 2021.

Related: Can Families With Young Children Cruise in Summer 2021? Cruise Critic Breaks It Down