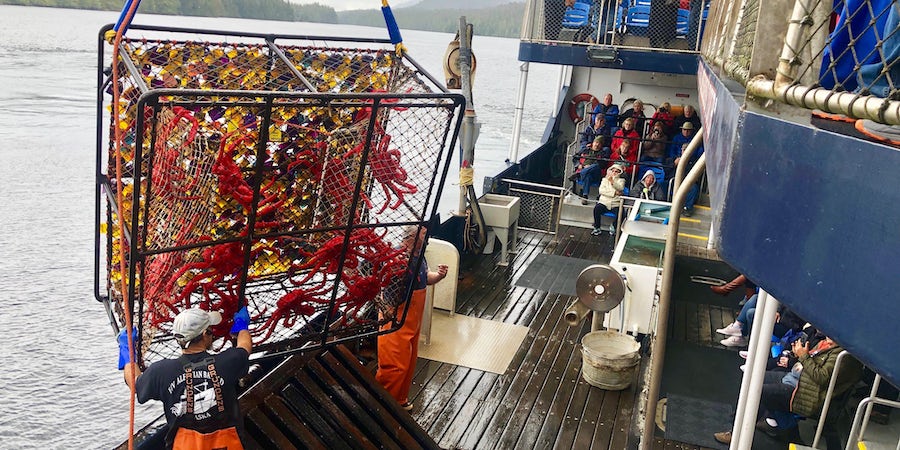 For many people, reality TV shows about Alaska are the first entry point into learning about the 49th State. And, perhaps one of the biggest is "Deadliest Catch," on the Discovery Channel. The series, which follows commercial fishermen searching for king crab in the Bering Sea, has been going strong since 2005.

The Bering Sea is pretty far -- and pretty rough -- for the typical cruise ship. Luckily, people who want to learn more about the risky conditions aboard crab fishing vessels can take a Bering Sea "Deadliest Catch"-themed tour in Ketchikan. The three-hour tour, held twice daily, features Aleutian Ballad, a ship featured in the second season of the series.

(a TripAdvisor company) for $225 and you can also book direct.

Related: Flying to Your Cruise: A Guide to Long-Haul Airports, Airlines and Flights

We boarded Aleutian Ballad on a typical Ketchikan day -- overcast and raining. We opted for the upper level for photo purposes, but the higher seats meant more exposure to the wind and rain. A deckhand gave us a warm fisherman jacket to wear.

As the boat set off from the Ketchikan pier, we heard a bit about the Aleutian Ballad's history. Its claim to fame came after a rogue wave hit the ship in season 2 of "Deadliest Catch," resulting in some of the series' most dramatic (i.e., terrifying) footage. After it stopped being used for fishing, the boat's owner, David Lethin, spent $2.5 million to turn it into a tour boat.

Related: What Ever Happened to the Rat-Infested Ghost Ship?

While the boat might be the draw, it's really the deckhands -- Andy and Dave -- who made the crab fishing world come alive. We listened duly to their explanations of the boat's machinery and it was pretty cool to watch them reel up the troll lines and crab pots (although it wasn't as dramatic once we learned they had already staged them with crab and fish, as well as an octopus). The crowd loved being able to take photos with live crab, some of which spent their time in an aquarium on deck.

But, the best moments of the trip came when Andy and Dave told personal stories about their lives on fishing boats. Andy, now white-haired, first joined a fishing boat at age 15, as a "last resort before military school," as he put it. Slightly younger, Dave got into fishing so he could raise money for his Alaskan rock 'n' roll band. Both men were engaging storytellers, and incredibly personable; it wasn't surprising that people lined up at the end of the tour to take photos with them.

The landscape, too, is a draw. Ketchikan is an amazing place to get out on the water and the Aleutian Ballad's destination, Annette Island, was as pretty as they come. The tour company has made an exclusive agreement with the Metlakatla Indian Tribe to lease the land, which means they can drop their crab pots and do things like feed bait fish to eagles without federal oversight.

The "Deadliest Catch" crab fishermen tour is both educational and entertaining, thanks primarily to the guides and their sea tales. If you like the TV show, you'll likely love this tour.