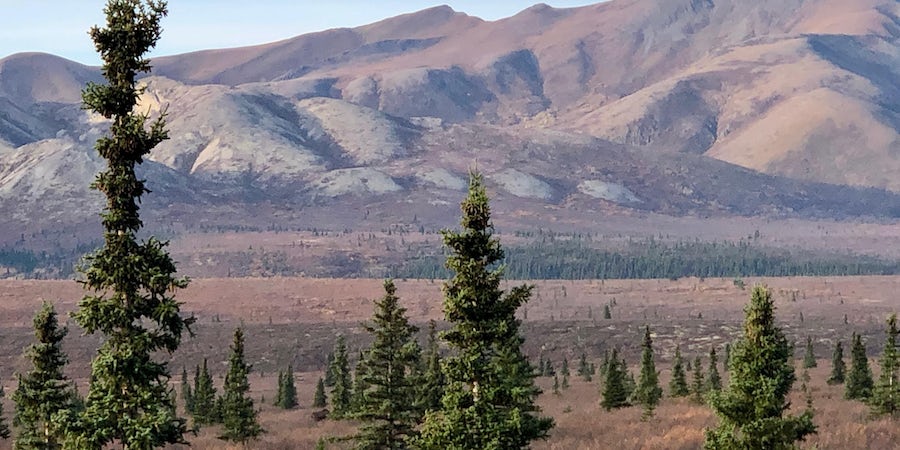 Eight hours on a school bus? At first blush, the Denali Tundra Wilderness excursion isn't necessarily the most appealing option on an Alaska cruise tour. But, there are reasons this iconic experience is a must for travelers into the Alaskan interior. First off, Denali bus tours are the only way for people to get into the heart of Denali National Park (only a limited number of passenger cars win permits in an annual lottery system). And second, it's your ticket to exceptional wildlife viewing, with chances to see black and grizzly bears, moose, caribou, Dall sheep and more.

The Denali Tundra Wilderness bus tour hasn't changed much through the years. From your hotel or lodge, you board a school bus-style vehicle that takes you into the national park. There are a few options in terms of time commitment. The Denali Natural History tour is the shortest, taking you 30 miles into the park. It lasts between four to five hours and costs $115 per person. For die-hards who want to go as far into the park as possible, you can take the 13-hour tour all the way out to Kantishna, at mile marker 92, for $285 per person.

By far, the most popular version is the eight-hour trip that brings you to milestone 62, at the Stony Hill Overlook. It costs $185 per person and gives you the best chance to see animals (and also allows you to get a picture-perfect shot of Denali, if the sun is out). The bus stops about every 90 minutes for restroom breaks, and you're given a snack pack for the ride (people often buy box lunches at their hotel or lodge to supplement).

You can book the Denali Tundra Wilderness tour through your cruise line -- Princess includes it on its Connoisseur tours fares -- or on your own. We've done it with both Holland America Line and Princess Cruises, and either way, it's the exact same experience. Booking it through the park can save money on the two longer tours, about $15 or so; surprisingly, you'll pay more to book the Denali Natural History tour through the park service than on your own. We recommend reserving the tour in advance, as it does sell out.

Morning tours can start at 6:40 a.m. and afternoon ones generally leave around 1:20 p.m. or so. It's far preferable to bite the bullet and get up early, as the animals are more active in the mornings (or conversely, in the evenings). If you take an early morning tour, you should get back in time to do another late afternoon excursion, particularly in the summer when the sun sets late.

With a 7:40 a.m. start time, our Princess tour guide cautioned us to get to the lodge pickup point early. We're glad we did, as it was a bit of a mad dash for a window seat. Because the bus takes the same road both ways, there's no real advantage to what side of the bus to sit on, but you do want to score a window.

Successful, we settled in as Glen, our driver, began his narration. Driving a bus through the national park is a primo job in the Denali area, and Glen has been doing it for 15 years. Be forewarned that the drivers also consider themselves entertainers, so you might be hearing some pretty hoary jokes during your eight hours.

As we entered the park, Glen explained the rules of the road. Many portions of the route are on mountain roads with steep drops. If he's watching the road, the rest of us needed to look for wildlife. Yelling out "STOP!" was the best way to grab his attention. Our bus took the task to heart, scanning the sides of the road constantly to see if anything was moving.

It didn't take that long to hit our first spotting: a large moose placidly chomping on leaves. Glen maneuvered the bus so everyone had a chance to take a photo.

Even when we didn't see wildlife, the view outside the bus was mesmerizing. Autumn hits Denali in early September, and the landscape popped with bright yellow alder against the red-tinged tundra. Glen noted that generally the fall is a good time for animal spotting, as bears are working hard to fatten up before the harsh winter.

Seeing Denali itself isn't a guarantee, as North America's highest mountain is often shrouded by clouds. We were lucky on our trip, with Denali's snow shining in the sun. It's often said that 30 percent of visitors to Denali will actually see the mountain; Glen posited that the figure was much less, closer to 20 or even 15 percent. Either way, our bus took advantage of the view as much as possible, shooting photos and selfies at every viewpoint.

Bears are the big attraction on any Denali Tundra Wilderness tour, and we didn't have to wait long to see a mama with two cubs walking alongside a river bank. Another bear-spotting opportunity came later in trip, with a trio of grizzlies walking alongside the ridge above our bus.

But, the star of the show ended up being much smaller. Glen saw this one, as a mottled red fox darted near the park road. The bus comes with a video camera on the front, and Glen quickly turned it on so we could follow the little fox's movements. The bus erupted in giggles as the fox, unaware of the camera, popped a squat and went to the bathroom, much like your dog at home. We tracked the fox as it trotted up the road, following it for a good five minutes before it snuck out of sight.

By the end of the day, our final wildlife tally equaled six bears, including the cubs; five moose; five caribou; a plethora of Dall sheep; four spruce grouse; one very cute red fox and one wolverine. That figure is a little less than what we spotted on a previous trip, where we witnessed nine bears. And, we still haven't been lucky enough to spot the elusive wolf or lynx. Next time.

The Denali Tundra Wilderness bus tour is a commitment, and at times, it can feel long. Even the most entertaining driver can become grating after eight hours. Still, it's a must-do to see the park, Denali's beauty and Alaskan wildlife in their natural environment.