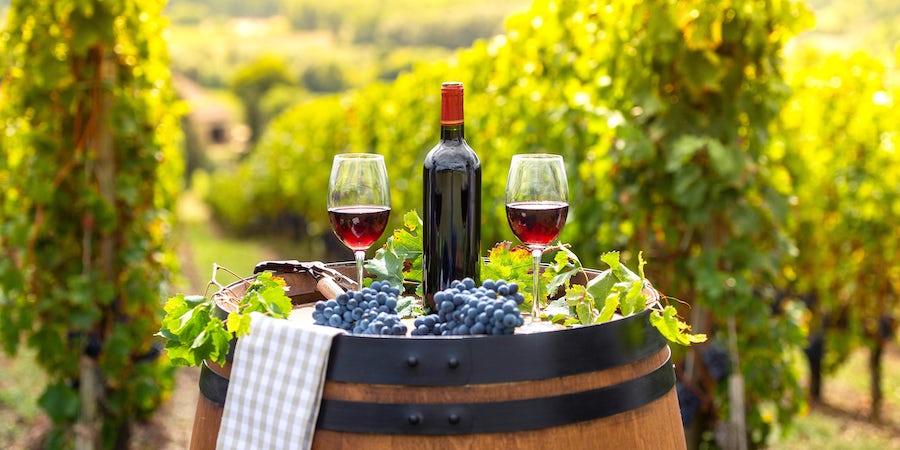 From sail away cocktails to sundowners on deck, drinks are a big part of the cruising experience. Some cruise lines go the extra mile, though, especially when it comes to wine.

While multiple lines compete for the accolade of offering the largest wine collection at sea, others push the boat out even further by theming entire itineraries around all things red, white and rose -- from the excursions to the onboard activities.

Here are some of the best cruises for oenophiles. Just remember to pack the paracetamol for the morning after.

You can’t browse the P&O Cruises website for long before the word wine crops up. In 2010 the line formed a partnership with celebrity wine expert Olly Smith who went on to curate what he proudly calls a "library of wine" for P&O’s range of Glass House wine bars. Today, Smith goes onboard P&O’s ships several times a year to host Wine Adventure cruises.

Highlights of Olly’s Wine Adventure cruises include onboard wine tasting experiences with Olly Smith, where the wine expert will showcase what he calls his "wowzer whites" and "romping reds" from all over the world.

The next Wine Adventure cruise will take place between October 5 and 18 2020 on Azura. Starting in Southampton, the itinerary will take passengers around the Canary Islands, with stops in La Palma, Gran Canaria and Lanzarote, returning to the UK via Lisbon.

Smith will also host a series of exclusive dinners on his Wine Adventure cruise, for which he’ll cherry pick a wine to go with every course. Passengers will be able to pick Smith’s brains at a handful of onboard drinks receptions, as well.

This cruise is for anyone who wants to broaden their knowledge of wines beyond what you usually find on the supermarket shelves.

Several times a year Silversea Cruises puts on a Wine Voyage, which is specifically crafted to help passengers deepen their knowledge of fine wines. The itineraries take cruisers to some of the world’s most famous wine producing regions where they can take excursions to wineries and cellar doors.

Onboard, meanwhile, passengers can meet Silversea’s Wine Ambassador -- the person responsible for overseeing and updating the line’s 160-item-long onboard wine list. Plus, they can take part in an introductory sommelier course during their trip.

Silversea has an exciting Wine Voyage taking place on Silver Whisper’s 21-day Fort Lauderdale to Buenos Aires itinerary on January 6, 2020. In addition to tasting wine, passengers on this trip will be able to take excursions to sample rum in San Juan, Porto Rico, and cachaca in Fortaleza, Brazil.

After this, Silversea’s next Wine Voyage will take place on Silver Cloud from May 7 to 18. Travelling from Lisbon to London, the cruise will stop in Portugal for the port and Bordeaux for its bold reds as well as La Coruna, Bilbao, Nantes, Belle Ile, Saint Marlo and Honfleur -- where there’s calvados to be tried, too.

If taking to the rivers is your preference, AmaWaterways offers wine cruises across Europe, visiting some of the most prized wine producing regions in the world. Compare Champagnes as you traverse the Seine, sample the rich reds of Bordeaux on a Garonne itinerary, and/or visit the birthplace of port wine on a Douro sailing.

Each Wine Cruise features a wine expert who brings hand-selected wines on board to be served during both meals and tastings. The wine expert also hosts discussions and talks throughout each cruise.

There are 15 Wine Cruise itineraries to choose from in 2020 and each one will run multiple times throughout the year. Highlights include the seven-night Europe’s Rivers and Castles option, which will set sail on August 20 2020 and run in reverse on August 27 2020. Taking place on AmaDante, the cruise will sail between Luxembourg – the home of Crémant wine – and Nuremberg. The wine experts on this cruise will be Keith and Trudy Kramer, owners of Kramer Vineyards in Germany.

Another highlight is the Flavours of Portugal and Spain itinerary, which will take place on AmaVida on March 31, April 7 and November 3 2020. This cruise will take in some of Portugal’s most historic wine regions and also give passengers the opportunity to have experiences like lunching in traditional wine producing estates called quintas and tasting traditional foods like bolas -- Portugal’s answer to the donut.

These cruises are for those who want to experience wine in its cultural context, including sampling the traditional food that goes with it on some of Europe’s finest rivers.

Related: 7 Things to Do Besides Shopping on a Christmas Markets Cruise

Taking place around the Mediterranean, all SeaDream’s Wine Voyages are overseen by the line’s wine director Martin Arentz. Each one includes two complimentary wine tastings and a Wine Maker’s Dinner, where every course on the menu is paired with a wine to bring out the flavour of the food.

SeaDream has lined up close to 10 Wine Voyages for 2020, taking in Italy, France and Spain. One of the highlights of the collection is the Malaga to Nice sailing, which will take place on SeaDream I between May 9 and 16. Passengers on this cruise will have the option to go wine tasting at Chateau de Berne, where grapes have been grown since Roman times.

Another big draw is the Civitavecchia to Valletta sailing, which will take place on SeaDream II between June 6 and 13. This cruise gives passengers the chance to do some wine tasting at the vineyard at the foot of Vesuvius.

The cherry on the cake, however, has to be the Civitavecchia to Nice cruise. Taking place on SeaDream II from May 22 to 30, this cruise is being labelled as a Master of Wine Voyage. Passengers will be joined onboard by Peter Marks, who is one of only 52 Masters of Wine residing in the USA.

SeaDream’s Wine Voyages are ideal for those who already know their merlots from their malbecs and want to spend a week deepening their already robust knowledge of the world of wine.

Several times a year Viking River Cruises offers an itinerary that allows passengers to deep dive into the wines and cuisine of south western France. In 2020, there are 10 eight-day Chateaux, Rivers & Wine cruises, from May to October.

Ports of call on this round-trip cruise include Bordeaux aka Little Paris, Cadillac where sweet wine is produced, Libourne -- the wine making capital of the Gironde region -- Bourg and Blaye where red wine production is a forte, and the wine growing commune of Pauillac.

Related: A Wine Lover's Guide to a Bordeaux River Cruise

It’s the excursions that make the Chateaux, Rivers & Wine cruise a standout sailing. Passengers will get the opportunity to visit a chateaux to see how sweet wines are made, hunt for rare truffles in Perigord followed by a truffle tasting lunch, join a master cognac blender for a workshop in which guests create their own version of the tipple, and enjoy a wine-paired dinner at the grand Château Kirwan, which sits in 99 acres of vineyards that are acclaimed for their red wine production.

Opt for the September sailing and you should catch a glimpse of the wine harvest in Bordeaux that is responsible for creating close to 900 million bottles of wine every year.

The Chateaux, Rivers & Wine cruise will strike the greatest chord with those who relish the farm-to-fork experience and make memories as they taste their tipples.