You may also like
Dismiss
Onboard Entertainment UK Style: The 6 Best Cruise Lines
Top Cruise Itineraries for Aussies and Kiwis
Norwegian Escape vs. Anthem of the Seas
Cruises with Celebrities: Spot Your Favorite Stars at Sea
6 Reasons to Go on a Ruby Princess Cruise
Cunard Line vs. P&O Cruises
Top 10 Things We Love About P&O Cruises' Ventura
Holland America Cruise Line History
Which Shows Are on Which Carnival Cruise Line Ship?
9 Reasons to Get Excited About P&O Cruises' Iona 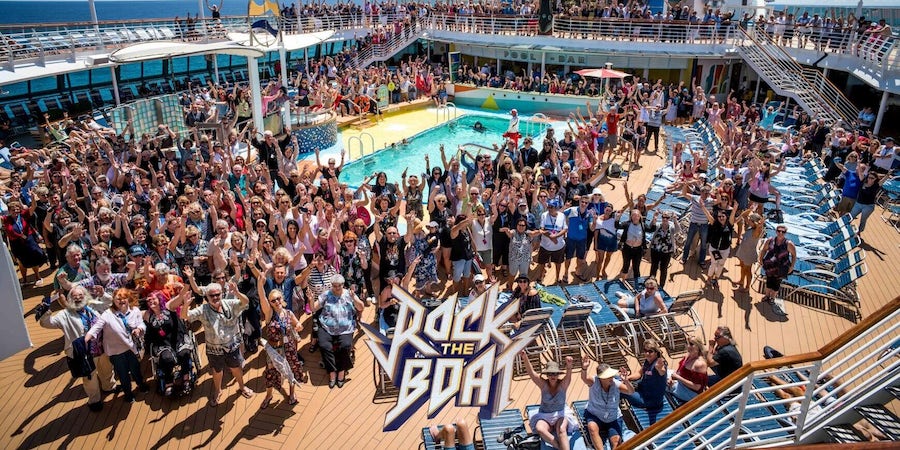 The Rock the Boat Cruise (Photo: Rock The Boat)

Rock the Boat 2020 will be the 10th year of this sell-out event, which is departing from Brisbane for the first time. Rock the Boat 2019, scheduled for October, sold out well in advance and the 2020 cruise is set to do the same. The line-up changes every year, although American rocker Suzi Quatro will headline both this year's and next year's cruises. Many other artists who performed over the past decade are also back onboard again. Around one-third of the 29 acts in 2020 are tribute artists and bands. There is also a sprinkling of younger artists, who have been featured on Triple J radio, so there's something for all ages.

Departing November 24, 2020, Rock the Boat is a roundtrip seven-night cruise from Brisbane, with day visits to Isle of Pines and Noumea, New Caledonia.  It's a full charter of Royal Caribbean's 2146-passenger

, which means everyone onboard has come for the music. In the past, the cruise has departed from Sydney; however, as the ship will be based in Brisbane in late 2020, Rock the Boat will leave from the Queensland capital.

The 2020 Rock the Boat cruise will headline Suzi Quatro, the diminutive leather jumpsuit-clad singer and bass guitarist of the 1970s. Next year's event will mark Quatro's 19th tour of Australia, a country she loves. Other headline acts include former frontman of Noiseworks Jon Stevens, who is now a solo performer, and a clutch of Australian artists from the 1960s and 70s including Russell Morris and Ross Wilson (ex-frontman of Daddy Cool and Mondo Rock), The Radiators and Kevin Borich Express. Tribute acts include the sell-out group Adam Thompson: Bohemian Rhapsody; Dirty Deeds; The Great Creedence Revival Show and The Tina Turner Show featuring Rebecca O'Connor. Younger artists include Trainwreck Duo and Zoltan, along with radio station Triple J favourites Hype Duo, who write their own songs but also perform popular mash-up parodies of famous tunes.

Suzi Quatro is the highlight along with headliners Stevens, Wilson, Morris and The Radiators. Every passenger has a guaranteed theatre seat for the headliner shows (there are two headliner shows per night), with passengers only allowed to attend one concert per headliner. The tickets to the shows are governed by what dinner seating (early or late) that the passenger chooses. There will be music day and night in the three-level Aurora Theatre, the Colony Club, nine-deck atrium and on the outdoor decks.

The week also features three theme nights providing plenty of opportunities to dress up: these are '1970s and 1980s Rock Gods'; 'School's Out' wear an old school uniform a la Angus Young; and 'When I Grow Up', a chance to dress as the person you wanted to be when you were a kid (a doctor or nurse perhaps?).

Fun, fun, fun and heaps of music day and night. While many of the acts echo the music of the 1960s and 1970s, it's a cruise for anyone who loves rock 'n' roll, nostalgic tribute bands, a bit of leather, dress-ups (optional of course) and dancing. There are kids' clubs for youngsters and teens and little ones may have a few brushes with fame as many of the artists bring their own families along.

Music fans -- especially lovers of rock 'n' roll and anything that was a hit in the 1970s and 1980s -- along with those who like 60s rock and even a bit of 1950s rock and crooner tunes. Party animals, albeit mostly those of a certain age, will love it. As you've guessed, this is not a serene cruise to chill out; it's to rock out. Loud music will be everywhere. People who like beaches and snorkelling will also be in heaven; Isle of Pines is a gorgeous piece of paradise with several great snorkelling spots and plenty of opportunities to meet the locals.  French speakers will get to practise the language in Noumea.

The cruise is run by Marius Els and Mick Manov, joint CEOs of South Australian-based festival and music company Choose Your Cruise. Bookings are made through

and various wholesalers including Oz Cruising and Cruiseco. Be quick: cabins sell out quickly.