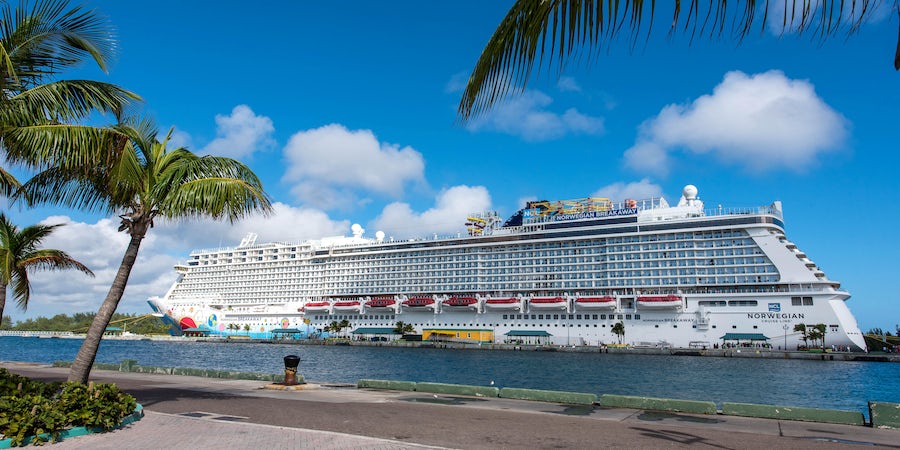 Among the largest ships in Norwegian Cruise Line's fleet, the line's two Breakaway Class ships were the among the first in the industry to feature several innovations including a full scale ropes course, large water park, cabins sized and priced for solo travelers, and a lounge and restaurant reserved exclusively for suite cruisers.

The two 3,963-passenger ships debuted in 2013 (Breakaway) and 2014 (Getaway) and were instantly the line's most popular and have remained among the most loved, outpaced only by their slightly tweaked Breakaway Plus Class shipmates.

From the top down, Norwegian's Breakaway Class is packed with things to do and see. The two ships each feature a full-size ropes course with an 8-foot-long "plank," which cruisers must walk in order to finish (although it can be skipped if necessary), as well as a large water park with multiple slides. They've also got mini-golf courses and basketball/volleyball courts, as well as the usual array of cruise activities and games.

As for theater-style entertainment, both ships have: a Broadway show featured in the main theater; a Cirque Dreams dinner show (each with a different theme) and "Wine Lovers: The Musical" dinner show; the dueling piano "Howl at the Moon" lounge; and the Latin dance extravaganza "Burn the Floor" show.

Among the bars on offer are the Skyy Vodka Ice Bar and the rock 'n' roll-focused Syd Norman's Pour House, among many, many others.

Though not the first ship class to have a The Haven suites-only enclave, Norwegian Breakaway and Norwegian Getaway were the first to expand The Haven to include a dedicated Haven Lounge and Haven Restaurant. The ships were also among the first to have an entire section of cabins, plus a lounge, reserved exclusively for solo cruisers. These Studio cabins are sized and priced for a single person and include access to the Studio Lounge, where solo cruisers can hang out together if they want.

Differences Among Ships Within the Breakaway Class

Norwegian's two Breakaway-class ships are nearly identical, but there are a few key differences, mainly in terms of the entertainment programming onboard. Norwegian Breakaway's featured big-stage Broadway show is "Rock of Ages," while you'll find "Million Dollar Quartet" on Norwegian Getaway. Breakaway also has a second dinner theater show in addition to "Wine Lovers."

There are some further differences when it comes to the bars and lounges onboard. Norwegian Getaway, for instance, has a Starbucks and a Sugarcane Mojito Bar, while Breakaway does not. Similarly, Norwegian Getaway is the only one of the two to have a comedy club.

A more subtle difference can be found in the larger main dining room onboard each ship. On Norwegian Breakaway, it's the Manhattan Room, and it's decked out in NYC supper club style. On Getaway, it's called the Tropicana Room, and it evokes 1950s Miami. The food's the same; it's just the decor that differs.

Norwegian's Breakaway-class ships are best suited for cruisers who want a high-octane vacation with lots to do at all hours of the day. Foodies will love the large selection of dining venues onboard, and with so much entertainment to choose from, there's bound to be something for all tastes. Theater fans, in particular, will enjoy the Broadway shows and dinner-and-a-show performances.

Suite cruisers will love the expanded The Haven experience, which comprises high-level suites, a private pool, and exclusive lounge and restaurant. The ships' Studio rooms and dedicated Studio Lounge also make the ship perfect for friendly solo travelers looking to avoid paying a single supplement and who want an easy way to meet other solos.

Cruisers choosing the Breakaway Class should be prepared to pre-plan for the onboard experience, making reservations for their preferred shows and dinners either before their cruise or shortly after boarding. Most of the high-demand activities fill up quickly, and if you don't act fast, you could miss out. Those who prefer a more laid-back approach to vacations might want to skip these two ships in favor of Norwegian's smaller, less reservation-oriented ships.

NCL's Breakaway-class ships are also pricier than much of the Norwegian fleet, so budget-minded cruisers and families should keep their eyes open for specials or opt for the older and less-expensive ships. And, as with all Norwegian cruise ships, Breakaway-class ships have lots of extra-fee venues and entertainment, so they should be avoided by anyone wanting a truly all-inclusive experience.