You may also like
Dismiss
Best Expedition Cruises for Australians & New Zealanders
6 Most Exotic Cruises
Top 10 Reasons to Sail With Hurtigruten
Top 10 Reasons to Cruise with Fred. Olsen Cruise Lines
Tips for Freighter Cruises
Coastal Cruise Tips
5 Things to Know About Family Expedition Cruising
Where You Can Cruise to Onboard Princess' Newest Cruise Ship, Sky Princess
Why There's Still Nothing Like a Day on the Water
What's Your Small Ship Match? 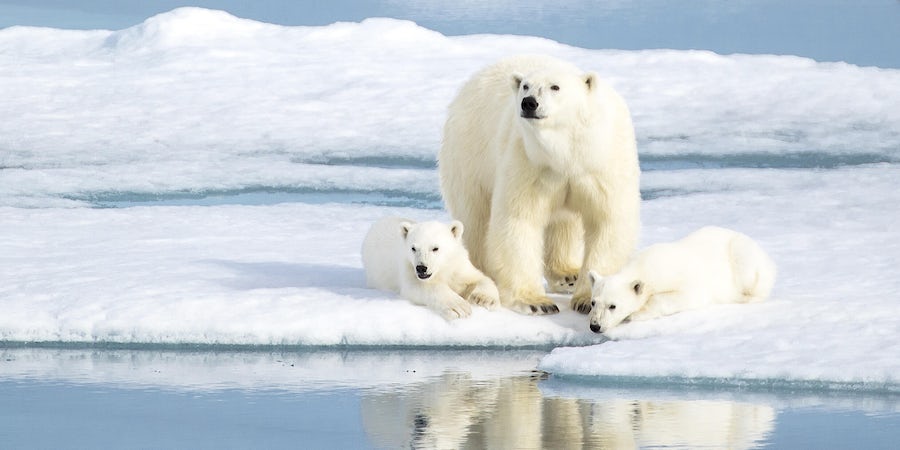 Arctic cruises are among the surest ways to spot polar bears in the wild, but as an old Inuit saying goes: "Before you have seen a polar bear, a hundred bears have seen you."

A captain on an expedition cruise in Norway's Svalbard Archipelago once advised, "There are three types of polar bears: shy bears who avoid people; ignorers, who have no interest in humans; and curious bears -- the kind you don't want to encounter on land."

Though sightings are never guaranteed, you're most likely to spot polar bears on sea ice or in the ocean, where they spend the bulk of their time hunting marine prey, such as seals. But sadly, these symbols of the wild Arctic are also becoming emblematic of climate change. Shrinking sea ice and melting permafrost have diminished their habitat, and scientists estimate fewer than 25,000 remain in the wild.

Related: Can an Expedition Cruise Transform Your Life? You Bet.

How and Where to See Polar Bears on a Cruise

In general, small expedition ships strengthened to weather sea ice are the best vessels for a polar bear safari. Choose a cruise with onboard naturalists who are skilled in keeping an eye out for the hard-to-spot creatures. On small-ship expedition cruises, shore excursions are primarily made via Zodiac, with guides going ashore first to make sure there are no bears present. When ashore, guides tote flare guns to scare off bears, and they bring rifles just in case the flares aren't enough.

Here's a breakdown of polar bear regions and ways to sail there:

The Svalbard Archipelago: This region outside of Norway has an estimated 3,500 polar bears. The numbers have actually grown in recent years around the region's largest island, Spitsbergen, since the species was listed as threatened in 2008. Ships depart from Longyearbyen, a town of 2,300 people that in 2018 drew almost 50,000 cruise ship passengers in its short summer season. Among the cruise lines sailing from there are Hurtigruten, Ponant and Silversea.

Greenland: These cruises aren't as popular as sailings in Norway, but a number of expedition ships and outfitters offer trips there. Most expedition cruises follow Greenland's east coast, though some operators, like Quark Expeditions and Hurtigruten, sail from Kangerlussuaq on the west coast, where's there's an international airport. Lindblad Expeditions, National Geographic Expeditions, One Ocean Expeditions and Ponant Cruises also explore the region.

Polar bear itineraries in Canada's far north might include Resolute Bay, an Inuit town in Nunavut and one of the nation's northernmost communities; the uninhabited Monumental Island in Nunavut's Qikiqtaaluk region; and Cape Wolstenholme, Quebec's northernmost point. Among cruise ships venturing into these waters are Ocean Endeavor, Silver Cloud and National Geographic Explorer.

Russia's Far Northeast: Including Wrangel and Herald islands, this region of Russia has been dubbed a "polar bear maternity ward." Expeditions depart from Anadyr in Russia's remote Chukotka region on the Bering Sea. Ships that sail there include National Geographic Orion, Spirit of Enderby and the Russian icebreaker Khlebnikov.

For more on how to view wildlife in the Artic, check out 9 Arctic Animals You Can See on a Cruise.

Polar Bears by the Numbers