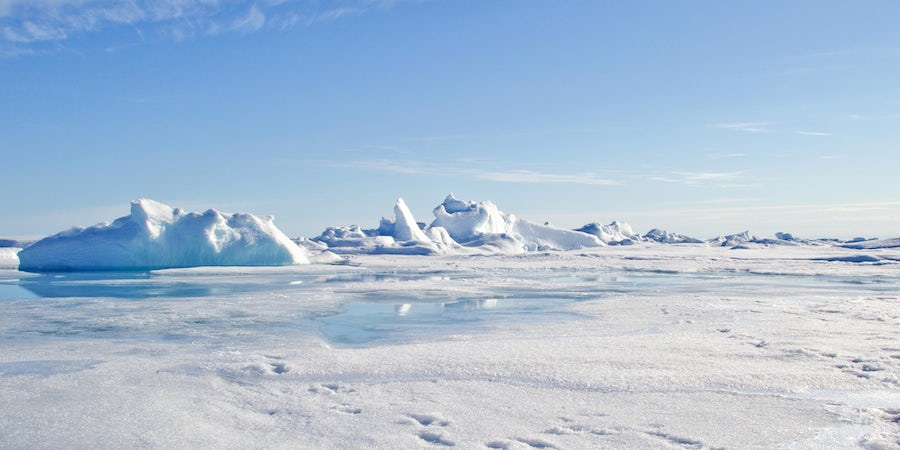 North Pole Cruises: Your Guide to Arctic Trips to the North Pole

The Arctic is an otherworldly land of boundless vistas, perpetual daylight in summer, glistening ice floes and abundant wildlife. No wonder that taking a North Pole cruise is becoming a growth industry in once rarely visited realms.

One caveat: Unlike Antarctica, which is on a solid land mass, the North Pole has no true fixed location. It lies on a mass of always-shifting ice chunks in the Arctic Ocean. Consequently, few ships actually sail to the pole. On July 13 2022, Ponant’s Le Commandat Charcot reached the geographic North Pole, marking the first time that a luxury passenger vessel brings passengers to the difficult to access location.

But many ships do get close, venturing within the Arctic Circle, above 66 degrees latitude.

These are truly remote areas, so it's not surprising that Arctic trips to the North Pole tend to attract seasoned travelers looking to tick off one more spot on their bucket list. The expansive region takes in northern parts of Norway and the Svalbard archipelago, Sweden, Finland, Greenland, Iceland and Canada.

The allure of this remote region has also sparked a thriving interest from cruise lines with expedition products, with new cruise ships and cruise lines crafting Arctic itineraries with their latest expedition vessels.

Similarly, Australia-based Scenic Cruises covers the Arctic extensively on its yacht Scenic Eclipse, including jaunts across the Northwest Passage. Quark Expeditions is also offering in-depth itineraries throughout Greenland and the Northwest Passage onboard its newest ship, Ultramarine.

Due to the current war in Ukraine, cruise lines that typically sail Russia’s Arctic have cancelled itineraries that sail from, or visit the Eurasian country. It's not known when these Northeast Passage cruises, as they are known, will resume.

Here's a breakdown of popular areas, and some lines and outfitters that'll take you there. But first, some general guidance.

Expect to pay in the $30,000 per person range for a 14-day jaunt to the North Pole. Inclusions vary, so read carefully to determine what's covered in the base fare of your cruise. Some tour operators like Tauck, which charters Ponant's Le Boreal for sailings to Norway's far-north Svalbard Archipelago, offer a truly all-inclusive package that covers transfers, hotel nights, all gratuities, the round trip chartered flight from Oslo to the embarkation point and an open bar on the ship.

Many outfitters include extras like a parka that's yours to take home. Some rent or loan rubber boots (for on-shore excursions), so you don't have to pack your own. Others, like One Ocean Expeditions, provide extras like waterproof pants, boots, binoculars, trekking pole, parka and backpack on its Canadian Arctic and Greenland expeditions. But you'll pay extra for the charter flights departing from Canadian cities to embarkation points.

Arctic cruising also requires a time commitment. The shortest itineraries are eight days (not counting the time it takes to get to the embarkation point). Two-week cruises and longer aren't uncommon. If time (and money) is no object, go whole hog with Abercrombie & Kent's grand-slam 48-day Grand Arctic Voyage (aboard Le Boreal), which starts in Norway and continues on to Greenland, Iceland, the Canadian Arctic and Alaska. Starting price: about $56,000 per person, plus international airfare.

If time (and money) isn't limitless, consider a shorter trip from an easy-to-get-to embarkation point, like Iceland. You'll find savings on early- and late-season departures.

When to Go on a North Pole Cruise

Prime time is July and August when the polar desert shows its colors. Snowfields give way to lush yellow-green mosses. And against all odds in this harsh environment, ground-hugging plants sprout tiny but brilliant blooms. Going earlier or later in the summer might mean not being able to get as far north due to ice, but winter cruising in this part of the world is growing, too. Northern lights cruises -- primarily in Northern Norway, but also in Greenland and Iceland -- are offered by a handful of lines, including Viking, P&O Cruises and Hurtigruten.

What to Expect on a North Pole Cruise

Fluctuating conditions can lead to changes in the itinerary, particularly on far, far north cruises. Weather and sea ice could waylay the most meticulously planned routes. Conversely, a twist in road can lead to unexpected delights. Either way, flexibility is a must on Arctic cruises. And on a related note, patience is a virtue, too. Animals in the Arctic are generally more dispersed than those in other expedition cruise locales like Antarctica and the Galapagos, where guides have regular go-to viewing spots.

Wildlife watching: Africa has its Big Five. The Arctic has its Big Three: polar bears, walruses and whales. You're unlikely to get up close and personal with polar bears (a good thing; they can be extremely dangerous), but a savvy crew will have their eyes peeled for sightings on distant ice floes. Chances of spotting walruses are good, since they tend to congregate in massive heaps on beaches. Whales, including minke, beluga and even blue whales (the world's largest creature) are a solid bet. Reindeer, ringed seals and a multitude of bird species, from kittiwakes to arctic terns, are a given.

Physical demands: On Arctic expedition ships, shore excursions are via open-air Zodiacs, which require minor gymnastics to get in and out of. Once ashore, the terrain can be uneven and rocky.

What to wear: Layers, layers, layers. Temperatures in the Arctic don't vary dramatically throughout the day, but wind and visibility can. Wait until you're ready to head out before donning the outer layer. Rubber boots and waterproof pants are a must for wet landings.

Note: Itineraries might consist of more than a single region.

The North Pole: Getting to the top of the world requires cruising on an actual icebreaker (as opposed to ice-class ships, which have thickened hulls, among other modifications). Ponant's newest ship, Le Commandant Charcot, has made some successful voyages in 2022 and is offering them again in 2023.

Norway's Svalbard Archipelago: The world's northernmost town, Longyearbyen, is on the archipelago's largest island, Spitsbergen. The town, a three-hour flight north of Oslo, is the starting and ending point for a number of Arctic cruises. Spitsbergen also is the site of the world's northernmost settlement, Ny-Alesund, a former mining town and now an international research station. How far north ships venture depends on ice conditions, but the entire area is well within the Arctic Circle. This is a popular cruising area, with companies ranging from the French line, Ponant, to Silversea.

Iceland: A number of cruises circumnavigate this island of geysers, stone sea stacks and other geological marvels. Though its mainland lies a few degrees below the Arctic Circle, the island of Grimsey, 25 miles off Iceland's north coast, qualifies as a true Arctic location. Among companies offering the itinerary is Lindblad Expeditions, with multiple sailings aboard the National Geographic Explorer.

Greenland: Located just south of the North Pole, the Earth's biggest island is ringed with spectacular fjords and snowcapped peaks. Many itineraries take in Ilulissat Icefjord -- site of Jakobshavn Glacier, the world's fastest-calving glacier -- plus visits to Inuit coastal villages. Some itineraries combine Greenland with stops in the Canadian Arctic. G Adventures sails along Greenland's east coast on a 15-day sailing that starts in Longyearbyen (Norway), and ends in Reykjavik.

Canadian Arctic: The Arctic Archipelago north of Canada's mainland includes most of Nunavut and part of the Northwest Territories. It's also home to Canada's newest National Marine Protected Area. Itineraries on a North Pole cruise through Canada often include visits to traditional Inuit villages, like Pond Inlet on Baffin Island.

Northwest Passage: The sea route through the Arctic Ocean to the Pacific cuts through the Canadian Arctic Archipelago. Among cruise lines that venture there: Hurtigruten, with a 24-day full passage from Nome, Alaska, to Kangerlussuaq, Greenland, and a shorter trip from Canada's Cambridge Bay (north of Edmonton) to Kangerlussuaq. Silversea Cruises completes the full passage from Kangerlussuaq to Vancouver in 42 days onboard the newly-refurbished Silver Wind, while Scenic has 22-day itineraries from Anchorage to Kangerlussuaq, with a flight connection to Copenhagen. Quark Expeditions sails 12- and 17-day itineraries covering segments of the Northwest Passage in the Canadian High Arctic and Greenland.