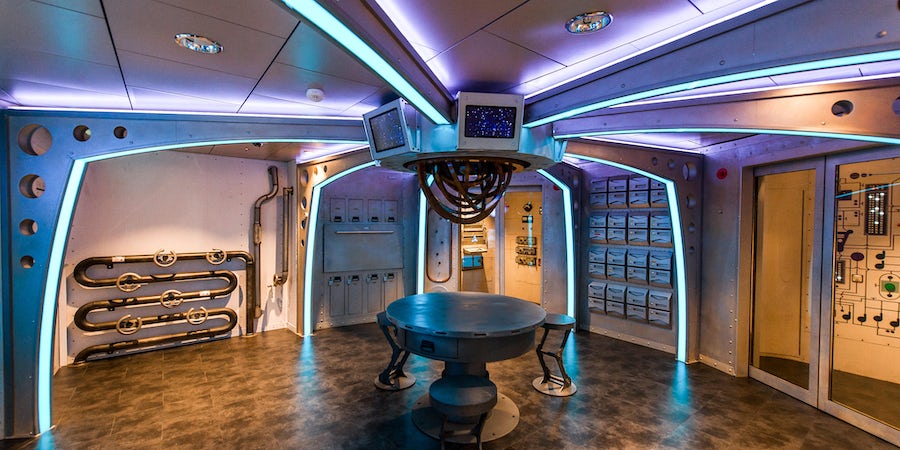 Puzzle Break on Harmony of the Seas (Photo: Cruise Critic)

Cruise lines have added escape rooms -- interactive experiences in which people are "trapped" in a room for a set period of time and can only "escape" by solving a series of puzzles -- to their already dizzying array of onboard activities. If you like solving puzzles, here are seven seafaring escape rooms you should try on your next cruise.

Located outside of the kids club, "Escape the Rubicon" on Harmony of the Seas is a space-adventure-themed Puzzle Break escape room. For a fee, four to 12 players can climb aboard the S.P.S. Rubicon, a "steam-powered starship" that is scripted to lose power and quickly find itself in danger, forcing participants to solve a series of puzzles in order to restore Rubicon's power source.

The 60-minute experience is so challenging that fewer than 30 percent of groups manage to escape in the hour. But fear not: Just like in land-based escape rooms, an employee is there to provide hints, should you need them.

On Symphony of the Seas, the escape adventure also takes place on S.P.S. Rubicon, but this time it's a "steam-powered submarine," from which up to 10 participants must escape by working together to solve puzzles.

2. "Escape From the Future" Puzzle Break on Anthem of the Seas and Ovation of the Seas

Like "Escape the Rubicon," the "Escape From the Future" Puzzle Break lets up to 12 players attempt to solve a series of puzzles to escape the room in an hour. The differences are that "Escape From the Future" is free to play, and it doesn't come with a narrative. The crew member manning the escape room can help provide clues, but you're on your own without much direction when the timer starts.

The puzzles your team has to solve to escape include crosswords, sudokus and mysterious pictures and codes. As time passes, the answers will help you move forward to find your key. Almost as challenging as "Escape the Rubicon," only about 40 percent of groups are able to successfully escape in 60 minutes.

For a fee, passengers can try their hand at space-themed escape rooms on both Oasis of the Seas, which has "Mission Control: Apollo 18," and Allure of the Seas, which features "Apollo 18: Lunar Landing." Each room gives passengers an hour to solve puzzles, allowing them to help Apollo 18 successfully complete its mission of reaching the moon.

Designed for up to 12 people, the experience has a roughly 50 percent success rate.

Similar to the escape rooms on other Royal Caribbean ships, The Observatorium requires participants to solve a series of puzzles within a one-hour time frame in order to accomplish a common goal and leave the room. It's an extra-fee activity.

Although the experiences differ by ship, passengers might have to repair a telescope used to monitor the cosmos by finding clues and solving puzzles with the help of up to 11 other people. We're told the success rate for this one is also about 50 percent.

If you're sailing on Norwegian, make sure to fit "Escape the Big Top" into your schedule. This escape room has multiple teams competing against each other at once, while working on a series of several puzzles, as opposed to one group all working together to solve a single puzzle.

"Escape the Big Top" doesn't have its own room; rather, each ship hosts it in an existing entertainment venue, allowing passengers about an hour to solve as many puzzles as they can. Cruisers can sign up to play for free at each ship's onboard box office.

Norwegian Encore's escape room offering is different from what's offered on its fleetmates in that it has its own dedicated space on the ship and passengers must pay to play. In addition, the escape room on Encore doesn't involve multiple teams competing against one another.

Instead, passengers will find two escape rooms, each with a Spanish galleon theme. Designed for six people per room, the experience allots participants 45 minutes to crack the codes needed to escape.  The game employs virtual reality, holograms and high-tech screens in its puzzles and to set the scene.

Passengers on Princess Cruises' Sky Princess and Enchanted Princess can take part in the "Phantom Bridge" escape room while at sea.

Developed through a partnership between Princess Cruises and Discovery, Inc. as part of the line's Discovery at Sea programming, the largely digital 23-minute for-fee experience allows groups of up to six people to choose puzzle complexity, allowing for more than 700 possible outcomes.