You may also like
Dismiss
The Cruise Lines List: A Roundup of Different Cruise Lines
Coastal Cruise Tips
5 Cruise Ships You've Never Heard Of
Best Cruise Ports for Wine Tasting
11 Best Whale Watching Cruise Shore Excursions
Sail Here, Not There: Avoiding Overtourism in Cruise Ports
8 Reasons to Cruise on a Refurbished Ship
The World's Best Beaches to Visit on a Cruise
Taster Cruises: What They Are and Where to Take Them
The 10 Most Popular Episodes of “Cruising with Jane McDonald” 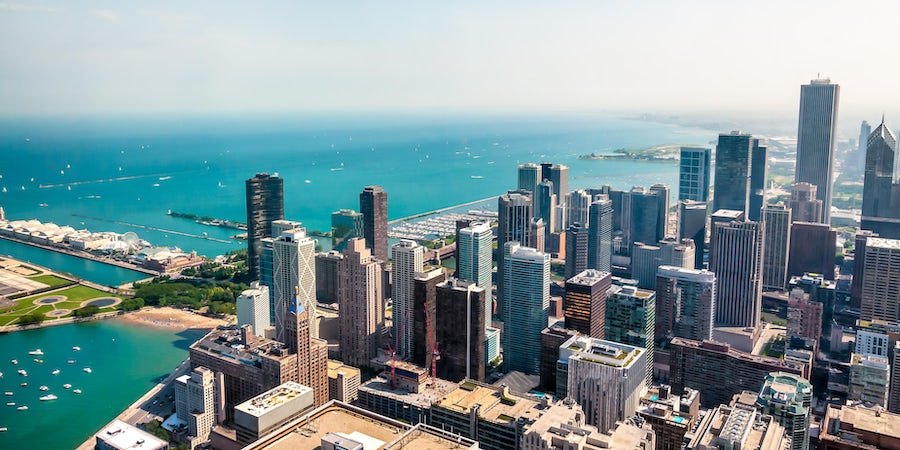 Think of Lake Michigan, the only one of the five Great Lakes located entirely within the United States, as a mini-ocean rather than a peaceful lagoon. The lake is so large that most of the time you'll feel as though you're out to sea; you can't see the shore, no matter which direction you look. One day this expanse of water can be totally calm, the next you're cruising on choppy, churning waters. (So, yes, you can get seasick.)

Just how large is Lake Michigan? The teardrop-shaped lake is 307 miles long and 118 miles at its widest point. It borders Wisconsin on the west, Illinois and Indiana to the south and Michigan on the east and north. Its name is thought to have come from the Ojibwe word mishigami meaning "great water."

The size of ships on Lake Michigan is limited by the locks along the St. Lawrence Seaway and those connecting the Great Lakes. Most ships carry roughly 80 to 200 passengers, and cruise season runs from mid-May through October. (In winter, large sections of the lake freeze.)

While crossing Lake Michigan from south to north (or vice versa), you'll spend a full day of leisurely cruising devoted to sightseeing from your stateroom balcony (on ships that have them) or an open deck, attending lectures about the lakes or chatting with fellow travelers.

What you see is largely weather dependent. Remember that mini-ocean? You might encounter fog so thick you can barely see beyond your ship's windows. On clear sunny days, you might see the upper coast of Michigan, an expanse of cliffs dropping dramatically to the water. Quite possibly, you'll see it all: fog, rain, sun and scenery in a single day.

Chicago: During a Great Lakes itinerary, cruise ships usually call at two or three ports on Lake Michigan. Stops typically include Chicago, where you can drop by Millennium Park to marvel at its outdoor sculptures. Art-lovers will want to visit the Art Institute of Chicago, displaying one of the world's most renowned art collections. Even though you're already cruising, it's well worth taking a 90-minute boat tour on the Chicago River to see the city's amazing architecture. If you're lucky, your ship will be docked at Navy Pier, an amusement park within walking distance of shops and tourist attractions. Note: Ships also dock about 15 miles south of downtown, in an industrial area.

Milwaukee: In Milwaukee, the largest city in Wisconsin, visit the Milwaukee Art Museum or head to Discovery World, a science and technology museum filled with an aquarium (including creatures from the Great Lakes) and interactive exhibits. Motorcycle fans will want to check out the Harley-Davidson Museum, perhaps before downing a beer in Brew City. Milwaukee, of course, is synonymous with Pabst, Miller and Schlitz beers.

Holland: In southern Michigan, several cruises stop at Holland, a city founded in 1847 by Dutch immigrants. The quaint, flower-filled town is known for having the only authentic Dutch windmill in the U.S. Be sure to check out the DeKlomp Wooden Shoe & Delft Factory for a chance to see wooden shoes being carved, as well as the iconic blue-and-white ceramics being crafted. If you arrive in Holland during May's annual tulip festival, you'll feel like you've stepped off a ship into the Netherlands. Would you believe the area boasts more than 5 million tulips?

Green Bay: There's more to nearby Green Bay, Wisconsin, than the Green Bay Packers football team. Cruise calls here include the National Railroad Museum, a showcase of railway history. (Think steam locomotives and posh private railcars from the mid-1900s.) Or, you can step back in time at the Heritage Hill State Historical Park. The site houses 30-plus historical structures, such as relocated log cabins from fur trade days and Fort Howard, built to help defend the Great Lakes trading routes.

Count yourself fortunate if your itinerary includes a northern Wisconsin stop in Door County's Sturgeon Bay. Door County is an all-American, Norman Rockwell painting kind of place with cute shops and inviting waterfront cafes. It's famous for growing cherries, and historic lighthouses seem to pop up everywhere along the coast.

When leaving Lake Michigan, ships sail east through the Straits of Mackinac into Lake Huron, followed by Lake Erie and Lake Ontario. Or, your ship might cruise west into Lake Superior for the day before heading east. If so, you'll have bragging rights to cruising on all five Great Lakes!