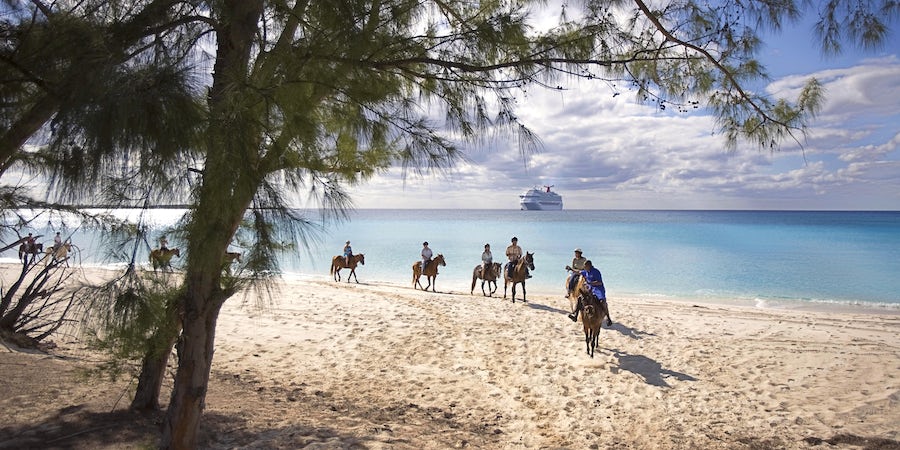 Exploring a destination on horseback is a fantastic way to connect with nature, experience more of the landscape and see your cruise port of call from a completely different perspective. Trail rides, suitable for both novice and experienced riders, will take you right off the beaten track along trails inaccessible by other forms of transport. Along the way you'll hear stories from your guide that bring the surroundings to life.

In the Caribbean, many rides end with the thrill of riding a horse into the ocean. We've saddled up to find some of the best places to head out on horseback -- and some things to look out for if you decide to go it alone.

Who hasn't dreamed of riding a horse along an expanse of white sandy beach? Jamaica is a great place to fulfil the fantasy and enjoy equine adventures on and around the island's beautiful shores -- and you can even take the plunge in the Caribbean Sea.

Horseback riding centers used by cruise lines are of a good standard, with well cared for horses and a big emphasis on passenger safety and enjoyment. No experience is necessary and following an introductory briefing, riders are matched to suitable mounts and set off along backcountry trails with at least two guides.

Along the way you'll ride through lush forests and past quaint villages, while the guide talks about the history of Montego Bay -- or MoBay as the locals call it. Jamaica's so-called second city is home to areas of interest used as locations in the James Bond movie "Live and Let Die," as well as herons and other wildlife. Once on the beach, riders can dismount and take a rest or head into the sea on their horse for a swim with a difference -- where you are relying on horse power rather than your own swimming abilities -- in the warm waters.

The private island paradise used by Carnival and Holland America Line is a perfect place to pick up the reins. With a total riding time of around 35 minutes and total excursion time of just over an hour, the ride on Half Moon Cay is one of the most popular horseback riding tours and ideal for first-timers who have never been on a horse.

A short tram ride takes passengers to the meeting spot where they mount up and set out with guides along meandering trails to get to the highest point of the island. Here, there is time for a photogenic moment with a scenic stop overlooking Half Moon Cay and the surrounding Bahamian islands.

Then, continue along the bay and back to the horse corral where cold beverages are served while the horses are "dressed" to take a dip -- with comfortable pads instead of saddles and rope halters. Remount and ride your horse into the sea while a photographer takes pictures available to buy afterward. Horses are natural swimmers and provide a very smooth ride in the water.

Just a short distance outside the bustling cruise port of Las Palmas de Gran Canaria lies a craggy rural hinterland which lends itself to exploration on horseback. The sunny climate on the Canary Islands countryside means riding tours are available year-round.

Riders of different abilities, including complete beginners, are matched to suitable horses for small-group tours of varying durations. Unlike some horseback tours, which are limited to walking, experienced riders can have an exhilarating ride at a faster pace. Meanwhile, everyone will enjoy the landscape of giant cacti and fragrant plants, such as sage, lavender and hollyhock. Take photos of the sweeping views over Las Palmas and valley of Real Barranco de Telde before heading from the beach at Bocabarranco de Jinamar.

After an included snack, cruisers can dismount and explore the mysterious archaeological site of Cuatro Puertas filled with caves and areas used for ancient religious ceremonies.

There might not be any gold in "them thar hills" these days, but modern-day adventurers can follow in the hoof prints of gold prospectors with an atmospheric horse ride through the Klondike Gold Rush National Park. The trip begins at a ranch in Dyea, a former tiny trading post at the head of the Chilkoot Trail that became prosperous at the height of the gold frenzy in 1897, thanks to the construction of routes bypassing it. The prosperity lasted only a year, however, and Dyea became a virtual ghost town thereafter.

Hear about the boom and bust history, as you set off by horse through the rugged forested valley where you'll pass by some of the few remaining signs of the once prosperous town, including the Slide Cemetery, where people killed in the 1898 "Palm Sunday Avalanche" are buried. The tour continues across the Dyea flats overlooking the northern tip of the Lynn Canal, famous for wildlife and natural spectacles, including soaring eagles, majestic mountains, wildflowers and the annual salmon run.

After the ride, relax with your guides and savor refreshments, including Alaskan salmon pate, before the scenic drive back to your ship.

Long before the advent of four-wheel drives, Iceland's original all-terrain transport was its native horses, valued for their stamina, endurance and intelligence. Since no other horses have ever been imported to Iceland, this pure breed remains unchanged since Viking times. These tough little horses (don't make the mistake of calling them ponies) have a unique fifth gait, a type of running walk known as the tolt, which is incredibly fast and smooth.

Despite their size, they are capable of carrying adults and are also sure-footed and gentle enough for even the most novice riders. Tours starting from one hour to a half-day or full day are available around Reykjavik, where city views quickly give way to an incredible lunar landscape shaped by volcanoes.

A trek on an Icelandic horse is a really authentic way for cruise passengers to enjoy the wild outdoors, and against the backdrop of mountains, you'll ride across rugged lava-strewn scenery, passing glacial lakes and streams. Afterward, enjoy a steaming mug of hot chocolate back at the horse barn.

Saddle up and become a gaucho as you ride to the "end of the world" from Ushuaia, Argentina's southernmost city, which lies on the main island of the Tierra del Fuego archipelago at the southern tip of South America.

Relinchos Hipica, the only horse riding center on the island, has been run by the same family for more than 25 years. After an orientation you'll be mounted on a sturdy and sure-footed home-bred Criollo horse, a breed which originated in Spain and is now native to South America; it's the steed of choice for South American cowboys.

The ride will take you through a landscape of immense and diverse natural splendor, starting with the sub-Antarctic forest of Nothofagus. Discover the history and culture of the native Yamana tribes that used to live here, as the trail continues along the Beagle Channel coast with panoramic views of the coastline and jagged peaks of the neighboring Chilean island of Navarino. Look out for the native birds of Tierra del Fuego, such as the giant petrel, which will be your companions along the way as your horse traverses streams and forest tracks.

The Marquesas, made up of 12 isles more than 930 miles north of Tahiti, are some of the world's most remote islands and provide a one-off horseback riding experience for passengers that reach these distant shores.

Ua Huka, one of the six inhabited isles, has herds of wild horses that outnumber the local inhabitants. The wiry animals are the direct descendants of horses transported from Chile to Ua Huka in 1856. Like the human population, the horses have learned how to survive on what nature supplies, grazing on hill grasslands and sweet mangoes that fall from trees.

Locals can be seen riding along the streets, and you can sign up for a trail ride that takes you deep into the island's jade-green landscape of dense forests lined with jagged hills and roadless valleys. Ride past tropical fruit trees, including breadfruit which is part of the islanders' staple diet, and look out for exotic bird species, such as the ultramarine lorikeet and Marquesan imperial pigeon (plus, of course, herds of wild horses).

The largest of the Bay Islands -- yet only 2.5 miles at its widest point -- and former pirate enclave 30 miles north of Honduras is an atmospheric place to take a ride and learn about the island's swashbuckling past. Your guide will give you some history, as you admire the local scenery of white-sand beaches and spectacular coral reefs from your horse.

The interesting ride will bring you through lush jungles and along sandy beaches, with rewarding wildlife sightings along the way. You'll also see mangrove forests, which not only protect the island from storms but also act as a safe breeding ground for many animals. Keep an eye out for opossum, white-tailed deer and agouti, a rodent with tiny ears.

The compact size of Roatan means that riding tours offered to cruise passengers can also be paired with other activities, including snorkeling, kayaking, a glass-bottom boat trip or simply relaxing on the beach before returning to your ship.

Sheltered from the ocean by Matakana Island and Mount Maunganui, Tauranga offers a dramatic environment for horseback riding in New Zealand. Local centers offer rides to cruisers calling at the port in the Bay of Plenty (a translation of the Maori name that means "the place of rest or anchorage").

Horseback excursions here are less "touristy" and more flexible than some trail rides. Both trek times and rides can be tailored to suit any ability, with beginners gently ambling along on quiet mounts and experienced riders revving up for thrilling canters and gallops.

Experience a real sense of freedom as you take in expansive vistas of the bush while riding through a working cattle farm with views from Mount Tarawera to White Island. Afterward, tuck into some hearty Bushman's food with a homemade lunch from the farm.

There's no doubt that a horseback tour can be an unforgettable experience, and cruise lines mostly partner with experienced providers that operate to high standards of animal welfare and passenger safety, with the option of borrowing a helmet (always advisable).However, horseback rides and carriage tours offered by unregulated individuals in countries such as Egypt, Jordan and Greece are issues of concern. Poor owners, often desperate to make money, neglect their animals and do not impose a maximum weight limit per rider (a condition on organized cruise ship horseback tours) or number of people per carriage.Fortunately, a number of organizations like the U.K.-based equine welfare charity Brooke, which also has a branch in the U.S., are working to raise awareness about the plight of working horses, mules and donkeys. The Brooke launched the

, which provides information on how tourists can spot signs of abuse and make an informed decision on whether or not to take a horseback or carriage ride.In the vibrant Moroccan city of Marrakech -- usually visited on day trips from the port of Casablanca -- you'll see horses with colored bands on their legs. These bands bear the word "SPANA," an organization that has carried out veterinary checks and issued licenses for carriage horses in the city since 1988. Only horses deemed fit and healthy wear SPANA's colored bands.The issue is not limited to horses however,  as donkeys and mules are also used to carry cruise ship passengers and heavy loads in some vacation hot spots like Santorini, where these "donkey taxis" transport cruisers from the port to the capital of Fira. Thankfully, the Greek island has provided a cable car -- in operation since 1982 -- as an alternative mode of transport for cruisers making this journey. Other initiatives, like The Donkey Sanctuary's "In Their Hooves"

-- backed by the Cruise Lines International Association (CLIA) in 2019 -- are also working to protect these working animals and encouraging cruisers to stop and think before taking a ride.