You may also like
Dismiss
Best Places to Leaf Peep on New England/Canada Cruises
St. Lawrence River Cruise Lines
5 Reasons to Take a St. Lawrence River Cruise
National Parks You Can Visit By Cruise
4 Best Ways to Tour Mount Etna on a Shore Excursion
Things to Do in Quebec City Before a Cruise
Can I Cruise to Niagara Falls?
Things to Know About Lake Huron Cruises
Things to Know About Lake Michigan Cruises
6 Best Cruise Ports for Hiking in the Caribbean 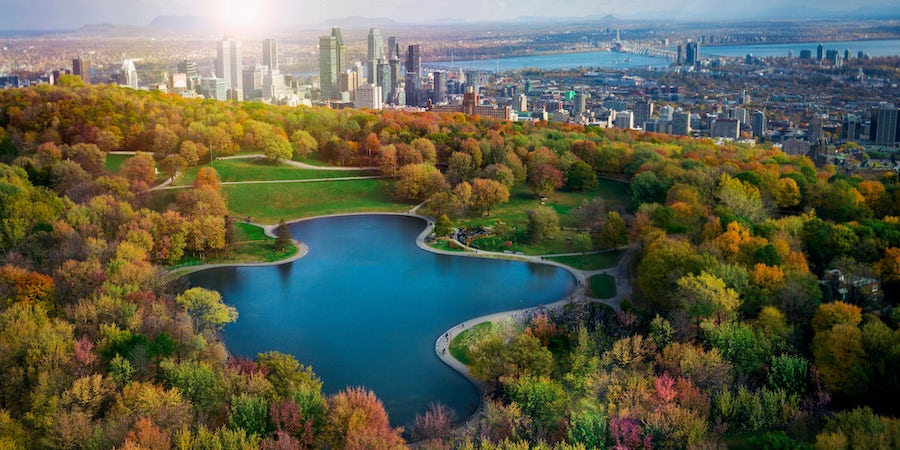 Montreal in the Fall (Photo: mat277/Shutterstock)

When it comes to cruising, mention Canada and the first image that comes to mind is vivid fall colors. Although Canada offers outstanding scenery at any time of the year, many cruise lines sail there only during the late summer and early fall seasons, attracting passengers who dream of seeing spectacular landscapes highlighted by a medley of pigments.

Sailing along the St. Lawrence River accounts for much of the time spent on these particular itineraries. A relatively narrow stretch between Montreal and Quebec City, the St. Lawrence expands as it heads eastward to the Maritime Provinces and Atlantic Ocean. An outlet of the St. Lawrence, the Saguenay Fjord, allows views of both sides of the shore, making leaf peeping from onboard a ship an attractive activity requiring little effort. An autumnal cruise definitely illustrates the relevance of the red maple leaf on the Canadian flag.

The Season and the Reason

Many conditions affect the exact time that leaves change color from year to year, but in a nutshell the process starts with the shortening of daylight and cooling temperatures. These changes signal trees to quit chlorophyll production, forcing the dominant green color to decrease and allowing other colors, like yellow and orange, to show. Other chemical changes create pigments, which combine to form purples and reds. The typical season for seeing colors in Eastern Canada is late September through mid-October. The fickleness of weather, which drives the changes, means that exact dates and intensity of color are never 100 percent predictable.

The boreal forest, found on the north shore of the St. Lawrence, comprises much of Quebec. Approximately one-third of the world's boreal forest is found in Canada. The trees in the forest, mostly coniferous, belong to five main species: white spruce, black spruce, balsam fir, jack pine and American larch. Only about 25 percent of this forest consists of deciduous trees, or ones that change color.

The changing leaves of the deciduous trees pop against the background of the green conifers. In contrast, the forest south of the river teems with deciduous trees like red maple, yellow birch, American linden, American beech, red oak, red ash, white ash, large-tooth aspen and American hophornbeam. These trees produce the brilliant colors associated with fall.

At one terminus of many cruise itineraries, Montreal's eponymous park invites cruisers to explore its multiple trails. Designed by Frederick Law Olmsted, who also designed Central Park, Mount Royal bursts with color in the fall when the trees transform to a palette of bright yellow, red and orange. The explorer of the area and discoverer of the St. Lawrence River, Jacques Cartier, named Mount Royal when he visited in 1535.

Visitors should make an effort to get to the highest point of the "mountain," as locals call it. The Mount Royal Summit, accessed by several trails, with viewpoints along the way, opens up the best views of Montreal. Back on the ship, both banks of the St. Lawrence River are in view, offering even more chances to glimpse the autumn color show.

A former battlefield, Quebec City's Plains of Abraham recall a time of clash and struggle, but the site now offers plenty of open space for the enjoyment of nature and a great overlook of the mighty St. Lawrence. The Promenade des Gouverneurs takes visitors along the Cap Diamant to the plains from the Chateau Frontenac, which can be accessed by the funicular from the lower town.

Fall colors and trees might be the main focus of leaf peeping tours, but don't forget the pastoral scenery of farmlands, vines and orchards. A tour to the Ile d'Orleans, across the river from Quebec City, traverses rural roads with opportunities to stop for a visit to the farms and orchards. Apples and pumpkins add to the panoply of fall colors.

Also just beyond the city and easily viewed from your ship as it sails the St. Lawrence River, Montmorency Falls can be further explored by land on an afternoon tour from Quebec City. Take the gondola up to enjoy the spectacular colors combined with the plunging waterfall, from one of the many scenic overlooks. A 3-mile loop trail traverses the area and includes a suspension bridge above the falls. The 487-step staircase along the side of the cliff requires some effort, but the vistas make it worth it. Other trails skirt the Montmorency River.

As a village situated on one of the longest fjords in the world, Saguenay is an ideal port and destination for fall colors. The narrow fjord lends itself nicely to viewing both shores, and the pristine area of The Saguenay Fjord is home to three national parks.

The Saguenay Fjord National Park (Parc National du Fjord-du-Saguenay) is located in the vegetation and bioclimatic zone of the balsam fir–yellow birch forest. This area is one of transition between the northern temperate zone, to which it belongs, and the boreal zone. Black spruce, white pine, white birch, cedar, red maple, sugar maple, trembling aspen and black ash are other species found in the balsam fir–yellow birch domain.

A shore excursion to Val-Jalbert visits an old mining ghost town with buildings in various states of disrepair. The backdrop of forests makes this area a photographer's dream. Don't miss the waterfalls.

At the far eastern terminus of the St. Lawrence River, on the Gaspe Peninsula, the rugged cliffs of the coast starkly contrast with the brilliant foliage generously offered by the balsam fir–yellow birch, sugar maple–yellow birch and balsam fir–white birch stands found within the park.

In addition to trees, the park in Gaspe is home to 45 species of Arctic–alpine plants, which are rare at such low and southerly latitudes. When the glaciers retreated nearly 10,000 years ago, these plants adapted to Forillon's cliffs, which were inhospitable to forests. Cruising on this stretch of the river affords the opportunity to see these Arctic–alpine plants that are generally found in northern Canada or on the peaks of the Rocky Mountains in western Canada.

In addition to the cliffs, the alpine meadows located at Cape Gaspe offer another contrasting background and are also home to these special plants. The area is so stunning that National Geographic listed the Gaspe Peninsula as one of its top 10 places for leaf viewing. While fall colors are certainly a highlight of any cruise through this part of Canada, catching a glimpse of migrating birds, like the snow goose, or one of the seven types of whales that call Forillon National Park home through October, sweetens the pot.

Close to the port of Saint John in New Brunswick, one of the largest urban parks in North America bursts with color in the fall. Rockwood Park offers many hiking and biking trails, rock climbing and a lakeside cafe. Canoeing, kayaking, geocaching and even golf are other options at Rockwood Park. This large park, which also includes a zoo, is often a stop on various city tours and shore excursions.

About an hour outside of town, the Fundy Trail Parkway skirts the coast. Along the way, stop at scenic St. Martins, the gateway to the trail. This charming village, once a shipbuilding center, includes covered bridges, red cliffs, sea caves, a lighthouse, public gardens and a scenic harbor from which to view the world's highest tides.

Beyond St. Martins, the Fundy Trail Parkway extends for 12 miles with chances to view the area at one of the 20 overlooks along the way. In addition to rock formations, a suspension bridge and a waterfall entice visitors to take a minute to enjoy the scenery and inhale the air scented by the sea and the forest. More adventurous types opt for kayak tours.