You may also like
Dismiss
Thames River Cruise Tips
Great Lakes Cruise Tips
Panama Canal Partial Transit vs. Full Transit
Holland America vs. Viking
Barge Cruises vs. River Cruises
Is a Larger River Cruise Ship Right for You?
Can I Cruise to Niagara Falls?
Things to Know About Lake Huron Cruises
What to Pack for a Panama Canal Cruise 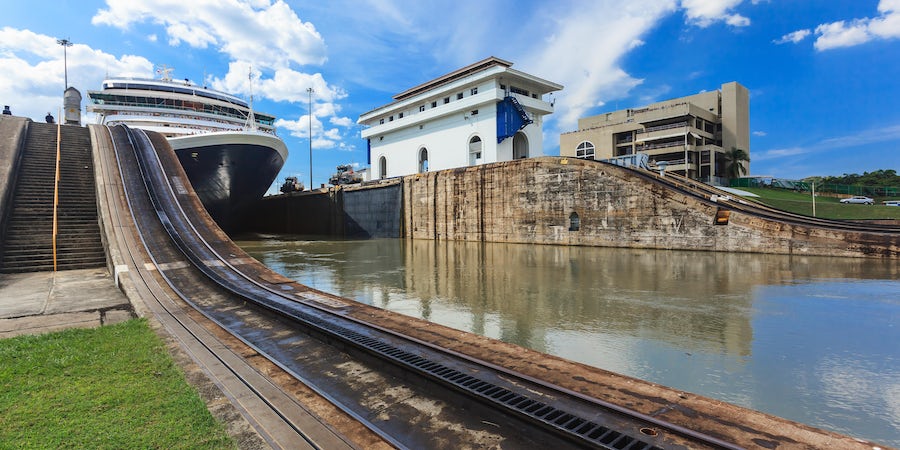 What Are Panamax and Post-Panamax Cruise Ships?

Cargo ships and cruise ships are classified by the size of the vessels and the areas in which they operate around the world. Several factors go into this classification, including the overall length, beam, draft and gross tonnage of the ship. These decisions are all determined during the initial design, as these vessels will need to safely transit waterways across the globe such as the Panama Canal.

The Panama Canal's expansion began operation in June 2016, allowing for larger ships to pass through the new and broader waterway. So, what do the terms Panamax and Post-Panamax mean after this expansion and has it changed?

What Is a Panamax Ship?

Panamax is the term given to ships specifically designed to travel through the original dimensions of the Panama Canal and the smallest of its locks. The width of those locks is 110 feet, the length 1,050 feet and the draft in tropical freshwater of 41.2 feet. Draft refers to the vertical distance between the waterline to bottom of the hull.

The required measurements of Panamax ships are to be no more than 106 feet in width, 965 feet in length and with a draft in tropical freshwater of 39.4 feet.

Cargo ships this size have a load capacity of 5,000 containers, which is measured in 20-foot equivalent units or TEUs. Cruise ships, such as the Island Princess with 2,200 passengers, or the Disney Wonder with 2,400 passengers, also fall within this category.

This narrower lane remains open after the expansion, so smaller cruise or expedition ships and Panamax cargo vessels still use this waterway to make the transit through the canal.

What Is a Post-Panamax Ship?

Post-Panamax was the term given to ships that did not meet the dimension criteria for Panamax vessels, but this all changed with the opening of the new lane in 2016. There are now many container and passenger ships and supertankers that can travel through the expanded locks. These ships are called Neopanamax or New Panamax.

The expansion project of the canal created locks on both the Atlantic and Pacific sides that are 70 feet wider and 18 feet deeper than the original waterways. The measurement of the locks in this new second lane are 1,400 feet in length, 180.5 feet in width and the draft is 60 feet.

The larger New Panamax vessels are built to travel through this wider lane with the requirements to be no more than 1,200 feet in length, 160.7 feet in width and with a draft of 49.9 feet. A cargo vessel of this size has a load capacity of about 13,000 containers or TEUs. Cruise ships as large as Norwegian Bliss with 4,004 passengers can now transverse the canal, which is a major change for the cruise industry. This expansion project has opened up the Panama Canal itinerary for the world's largest cruise ships.

It was estimated that approximately 234 cruise ships would sail through both sets of locks in the canal in the 2018–2019 season.

So, what does this mean for Post-Panamax vessels?

According to the Panama Canal Authority or ACP, approximately 96 percent of the world's vessels are now able to transit the canal with this new expansion. This leaves very few cargo or cruise ships that can't travel through the canal. These ships maintain the distinction of Post-Panamax vessels.

Related: Pictures From a Panama Canal Transit on Celebrity Infinity

This would include Royal Caribbean's mega-cruise ships like Harmony of the Seas and Symphony of the Seas. They are both wider than the maximum allowable width of vessels able to transit the canal. They are also unable to clear the height of the Bridge of the Americas at the entrance to the Pacific Ocean. That maximum height is 201 feet above the waterline, and these ships are 236 feet and 238 feet high, respectively.