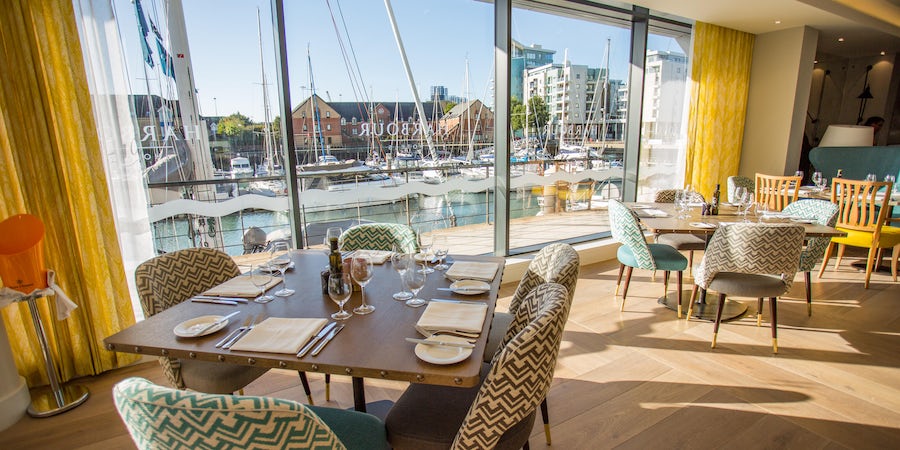 The Most Expensive Hotels Near Southampton for a Pre-Cruise Stay

If you're traveling to Southampton for your next sailing -- be it from a major airport, such as London Heathrow or Gatwick, or from further afield within the U.K. -- chances are you will need a pre-cruise stay the night before you embark.

There are a number of hotels in Southampton for your pre-cruise stay, including the Grand Harbour Hotel and the Holiday Inn, as well as the boutiquey Pig in the Wall, but to get your next cruise vacation off to a more luxurious start, there really is only one option in Southampton cruise port -- the five-star Harbour Hotel & Spa.

Chauffeur-service or port shuttle: Yes, which is free of charge to the cruise terminals. A chauffeur-service from Heathrow, Gatwick or Southampton airports to the hotel is also offered, for an added fee.

About the hotel: This stunning hotel opened just two years ago, and has completely transformed the marina area where it takes centre stage. The 119-bedroom hotel is shaped like a cruise ship, and within its ultra-modern design contains a number of authentic cruise memorabilia.

Everything about this hotel exudes attention to detail, whether it's the food, service levels or the accommodation.

Related: Why Abercrombie & Kent Is the Cruise Line for You

The rooms are stunning. The danger with ultra-modern is they lose character over design, but not so at the Harbour -- the white walls are offset by warm wooden doors, thoughtful memorabilia like well-worn books and the comfiest beds we have ever slept in.

The food is, quite simply, outstanding. The Jetty restaurant prides itself on fresh-caught local fish of the day, or you can opt for a sublime tasting menu, which at £59.50 per person, six courses and portions which are starter size is outstanding value.

The highest compliment we can pay the service is it is as good as you'll find on a cruise ship -- and that is really saying something -- intuitive, friendly, knowledgeable, whether it's about wine varietals or food provenance, and welcoming.

The hotel is also very much geared up for cruise passengers, offering a chauffeur service from Heathrow or Gatwick or Southampton airports (or the station) to the airport, and to the ship. It also offers a day room rate, for those arriving early for their cruise or if their cruise has been delayed.

There is also a lovely spa with a small indoor swimming pool.

This is the luxury hotel that Southampton has needed for so long. Outstanding.

Best of the Rest

Our pick for the second best hotel in Southampton is the charming and tiny Pig in the Wall, but note this is more of a B&B than a hotel, with just 12 individually-designed bedrooms and no facilities, just a small deli below. Parking is nigh-on impossible, but you are just a few minutes taxi ride from the station and the cruise ports. It’s pricey for what you get, and to score a room you’ll need to book months in advance.

Your options are significantly increased if you are prepared to look beyond Southampton. We’ve arbitrarily drawn a semi-circle around the port to include the best hotels in the neighbouring area, which are not more than an hour from the city. These include hotels in the gorgeous New Forest and elsewhere in Hampshire.

The Pig at Brockenhurst

Chauffeur-service or port shuttle: No.

About the hotel: This is the original Pig hotel, set in the heart of the New Forest, in the charming village of Brockenhurst.

It’s in a gorgeous setting -- very “English”, with extensive grounds, but it’s worth noting that these hotels are better described as “restaurants with rooms” as the emphasis is very much on food, with everything locally sourced, seasonal and sustainable. And if you are a foodie, we highly recommend this hotel ahead of your cruise.

However, don’t expect a swimming pool or gym -- this hotel is more a collection of very pretty and individual rooms, in a boutique style, small and expensive (and note too, there is often a two-night minimum stay over weekends).

Related: Why CroisiEurope Is the River Cruise Line for You

About the hotel: Reached by a long, winding driveway and set in acres of rolling grounds, the Four Seasons Hotel Hampshire is in a truly stunning setting, near a tiny village called Dogmersfield which was recorded in the Doomsday Book. The hotel itself is set in the original manor house that stood here, and has been completely restored to the levels of luxury you would expect from a Four Seasons.

The rooms are gorgeous, beautifully decorated with huge, comfy beds and bathrooms with rain showers. And if you want to splurge, you can always opt for one of the suites which look out over the grounds. The hotel will also accommodate day use rooms for cruise passengers, depending on availability.

Facilities include a spa, an indoor swimming pool, a gym, a restaurant and a bar, as well as fishing, horse-riding (there are stables in the grounds), clay pigeon shooting and an adventure course in the woods for kids.

None of this comes cheap -- rooms start at £415 and suites will set you back well over £800 -- but if you want an ultra-luxurious pre-cruise stay deep in the Hampshire countryside, then the Four Seasons is hard to beat.

Distance to port: 20-30 minutes, depending on the route and traffic conditions

Chauffeur-service or port shuttle: Not available.

About the hotel: Lime Wood is a country house hotel and spa in the gorgeous New Forest National Park, close to the small town of Lyndhurst in Hampshire.

The hotel is home to several cabins and lodges, as well as the main country house, with accommodation categories including Rooms, Suites, Lodges and Cabins. The most recent addition is the stunning Lake Cabin, located on the far side of the grounds' lake at the end of a meandering private pathway.

Decor is stylish and luxurious throughout, while lodges and cabins have more of a rustic-luxe feel to them. There's lots of reclaimed timber and even a living sedum roof in the Lake Cabin.

The hotel has a partnership with culinary powerhouse Angela Hartnett (of the Michelin-starred Murano restaurant in London) who runs Hartnett, Holder & Co., as well as cookery classes and Angela & Co Pop-Ups, which sees the chef joined by other top celebrity chefs. While head chef Luke Holder helms the kitchen, which features an Italian menu.

There’s also The Kitchen Table and wellbeing expert Amelia Freer on hand for workshops and plant-based cookery classes. The hotel also boasts its own smokehouse and an impressive wine cellar.

We love Lime Wood's three-level Herb House Spa, where the farm-to-fork -- or rather farm-to-facial -- theme continues. Guests can try yoga on the rooftop Herb Garden (hence the spa's name), relax by the inviting 16m pool (with views over the garden) or try out a spa treatment.

Related: The Lime and Coconut on Royal Caribbean Cruises (Plus Menu)

Lime Wood is arguably one of the U.K.'s most luxurious -- and expensive -- country retreats: