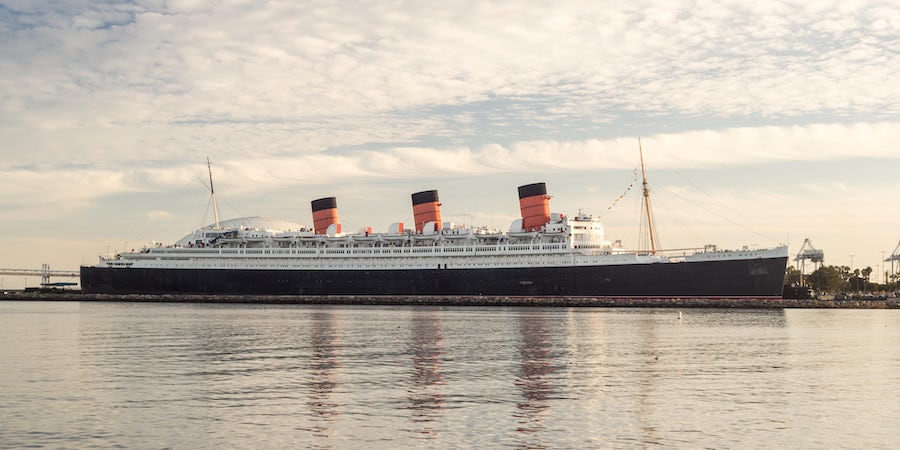 The World's Most Famous Cruise Ships

Quick -- name three recently built cruise ships. Can't do it? With new ships setting sail every year, each one striving to stand apart from a crowded fleet as the biggest or boldest, it becomes hard to remember most of their names. Or any of their names, for that matter.

Among the more than 500 passenger ships that have ever plied the waters of the world as ocean liners or cruise ships, there is only a handful with names that stick in the memory -- some for notable milestones or roles in world history, others for notorious disasters.

Even if you can't remember which ship you're sailing on next, see if you're tuned into some of the most famous cruise ships in the world.

An obvious top choice, the RMS Titanic is famous for more than its horrific sinking in the frigid waters of the Atlantic, creating one of the deadliest commercial maritime disasters in history. At the time of its maiden voyage, it was the largest ship afloat at more than 46,000 gross tons. For reference, the current largest cruise ship, Symphony of the Seas, tops 228,000 tons.

Beyond its size, Titanic, like its sister ships of the White Star Line (Britannic and Olympic), brought something relatively new to the transatlantic passenger market -- luxury and comfort.

While we're talking ocean liners, which are designed primarily to transport passengers from point to point (compared with the floating hotels that are today's cruise ships), we would be remiss if we didn't include RMS Queen Mary.

Related: What Is the Difference Between an Ocean Liner and Cruise Ship?

Alongside sister ship RMS Queen Elizabeth, Queen Mary operated a transatlantic route from 1936 to 1949 under the short-lived depression-era partnership between the Cunard and White Star lines, followed by continuing service through 1967 for Cunard. Its tenure included service as a troop carrier between Australia, New Zealand and the United Kingdom during World War II. The years at sea were not without mishap; Queen Mary suffered a near-capsizing roll in 1943 and ran aground in 1949.

Since 1967, the ship has been permanently moored in Long Beach, California, adjacent to the Carnival cruise terminal. It now operates as a museum, event center and unique hotel, allowing visitors to sleep in first-class staterooms. Some claim the ship is haunted, and visitors can take evening ghost tours.

The ship's successor in name, RMS Queen Mary 2, was, as of 2019, the only passenger ship currently operating full time as an ocean liner offering year-round transatlantic crossings.

Before the age of grand ocean liners waned, SS United States entered the market as the largest liner built entirely in the U.S., as well as the fastest transatlantic ship, with an average speed of over 35 knots during its maiden crossing in 1952. Often called the "Big U," the ship still holds the westbound speed record for transatlantic passenger service, known as the Blue Riband.

The U.S. government helped finance a portion of the construction, ensuring that the ship could easily be converted into a troop carrier or hospital ship if the need arose. The United States was retired from service in 1969 but stood at the ready as a reserve ship for the U.S. Navy until 1978.

Since then, the fate of the ship has been uncertain, with a long string of ownership changes and failed schemes to bring the ship up to current operational and safety standards for cruise ships, position it as a permanently docked hotel or even sell onboard condominiums. The ship has narrowly escaped the scrapyard more than once.

Today, the cruise ship -- most famous for American engineering -- rests in Philadelphia under the ownership and care of the SS United States Conservancy, awaiting a potential new life as a waterfront attraction and museum.

Queen Elizabeth 2, though built as an ocean liner, became famous more as a hybrid craft that brought together the best of a traditional ocean liner and a modern cruise ship -- ideal for its pioneering annual world cruises.

Following the ship's career of almost four decades and more than 5 million miles that included service as a troop carrier in the Falklands War and a massive conversion from steam power to diesel, Cunard retired QE2 in 2008. After almost a decade out of public use, QE2 opened as a luxury hotel in Dubai in 2018.

While not having quite the same name recognition as our top four ships, the original Carnival Mardi Gras holds a significant spot in cruising history as Carnival's first cruise ship.

As the era of ocean liners ended, those ships were up for grabs by companies ready to cash in on the concept of cruising for cruising's sake. Enter Carnival, which purchased Empress of Canada, an ocean liner launched in 1960. It gave the ship a new lease on life in 1972 as Mardi Gras, the first "Fun Ship."

Its sister ship, Empress of Britain, became Carnival's second ship, sailing under the name Carnivale. It was not until 1982 that Carnival launched its first purpose-built ship, Tropicale, which heralded the era of new cruise ships and a phasing out of the old converted ocean liners.

Mardi Gras changed ownership and names several times before its eventual sale for scrap in 2003 after 42 years in service. In December 2018, Carnival announced the revival of the name Mardi Gras for its largest ship built to date, set to launch in 2020.

Known for its appearances in most episodes of television series "The Love Boat," the original Pacific Princess sailed around the globe from 1975 to 2002, operated by Princess Cruise Lines. As the popular TV show fueled the explosion of the cruising industry, the ship also became well known.

Before it was dubbed "The Love Boat," Pacific Princess first was operated by Flagship Cruises with a singular purpose of cruising between the United States and Bermuda between 1971 and 1975 under the name MS Pacific.

As with many famous cruise ships, Pacific Princess' years at sea were not always smooth sailing. In 1998, crew members reportedly used the ship in a drug smuggling operation in the Mediterranean. Its final voyage as Pacific Princess was in 2002, when Princess replaced the vessel in the fleet with the former Renaissance Cruises' R Three, which still holds the name Pacific Princess.

sinking of Costa Concordia remains one of the most tragic moments in the history of modern cruising, serving as a strong reminder of why safety onboard cruise ships must be a priority.

On January 13, 2012, Concordia hit a rock off Isola del Giglio, northwest of Rome, creating a 160-foot gash along the port side. With crippled propulsion and electrical systems, the ship took on water, listed badly to the port side, then eventually grounded itself on its starboard side, resting precariously near a 260-foot-deep crevasse.

All but 32 passengers and crewmembers onboard survived the harrowing wreck and almost six-hour evacuation. Captain Francesco Schettino was subsequently imprisoned for manslaughter.

Costa Concordia was eventually salvaged and sold for scrap.

Also counted among the infamous cruise ships of recent years is Carnival Triumph, which gained notoriety for a 2013 cruise during which an engine room fire resulted in massive systems failures and loss of power off the coast of Mexico. Lights and air-conditioning ceased to function, and sewage flowed through passenger areas of the ship, earning the ill-fated trip the nickname "The Poop Cruise."

Triumph was eventually towed to safety in Mobile, Alabama, after drifting without power for four nights in challenging conditions. While docked there undergoing repairs, Triumph sustained hull damage when high winds tore the ship loose from its moorings. Damage from both incidents was eventually repaired, and Triumph returned to service.

In 2019, Triumph received a massive refurbishment to become the second Sunshine-class ship, complete with a new name: Carnival Sunrise.

Oasis of the Seas

Royal Caribbean has long been famous for its vessels, which are marvels of ship-building engineering. Much of the fleet has held top size rankings among modern cruise ships, but Oasis of the Seas ushered in a new era of size, capacity, entertainment and design, making it one of the most memorable vessels sailing the world's oceans today.

With a gross tonnage of more than 225,000 tons, Oasis has a crew larger than many cruise ships' passenger counts -- more than 2,400. The crew serves more than 6,000 passengers at maximum capacity, a record for passenger ships when Oasis made her maiden voyage in 2009.

The innovative above-the-water design includes the world's first park at sea with more than 14,000 live plants and unique architecture featuring two towers of balcony cabins on either side of the ship, facing both outward toward the sea and inward toward the opposite tower with empty space in the middle. This design creates seven decks of open-air balcony cabins with blue sky overhead and views of public spaces below.

With those towers, combined with the rear-facing Aqua Theater, the ship has one of the most famous profiles in modern cruising history -- at least until the next big innovation comes along.