You may also like
Dismiss
Fall Foliage: Canada Cruise Ports to Visit This Autumn
Can I Cruise to Niagara Falls?
Things to Know About Lake Huron Cruises
Things to Know About Lake Michigan Cruises
Visas for Cruise Travel to the UK and Europe
Are Dolphin Tours Humane?
10 Reasons to Stay in Seattle Before Your Alaska Cruise
9 Best Beaches in Puerto Rico for Cruisers
6 Best Cruise Ports for Hiking in the Caribbean
10 Best Beaches in Mexico for Cruisers 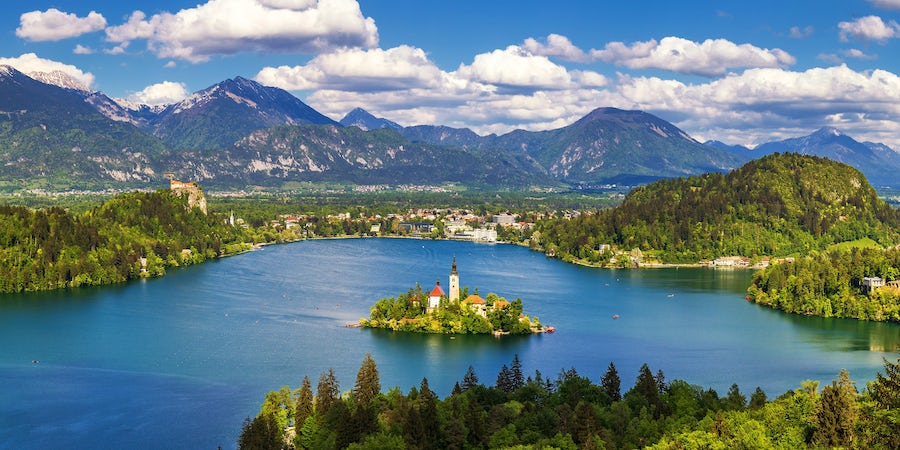 The 10 Most Beautiful Lakes You Can Cruise To

When you think about beautiful cruise destinations, extraordinary coastal scenery likely comes to mind. But have you ever considered using your shore time to visit the inland lake regions that are so gorgeous they will take your breath away?

Cruise lines calling on nearby port cities offer excursions to places such as the eerily blue glacier-fed lakes of Alaska and the fairytale-like scenery in the Lake District in Austria.

Day trips are also available through private operators with specialized tours. If you can't get enough of water-focused scenic vistas, put these 10 most beautiful lakes in the world on your port day wish list.

Travel through the picturesque Welsh countryside to visit this beautiful glacial lake in Snowdonia National Park. Cruise lines, like Norwegian and Oceania, offer excursions from Holyhead, just 30 miles away.

The scenic drive from port travels through Anglesey across the Menai Strait and onto Caernarfon, which is known for its well-preserved medieval castle dating back to 1283. Stops also include the quaint lakeside village of Llanberis, where you can capture photos of Llyn Padarn Lake and a drive on Llanberis Pass at the base of Snowdon, the highest mountain in Wales at 3,560 feet.

Alternatively, hire a private guide to visit Llyn Padarn Lake and ride an old-fashioned steam train along the shoreline on the Llanberis Lake Railway. Have your camera ready for Instagram-worthy photos.

Cruise lines, like Princess, offer nine-hour excursions to Lake Ashi and Fuji-Hakone-Izu National Park from Tokyo (or Yokohama). The lake was formed in the caldera by Mount Hakone's last eruption 3,000 years ago.

A lake cruise here offers spectacular panoramas of Mount Fuji's white-capped peak. The best and most unobstructed views of Mount Fuji are in colder months rather than summer. They also tend to be better in the early morning and late afternoon hours, without the haze and clouds.

Other highlights of an excursion to Lake Ashi include an aerial gondola ride with stunning views overlooking Hakone National Park and Owakudani Valley's sulfur thermal springs.

Plan to add an extra day before or after your Alaska cruise to visit picturesque Eklutna Lake, located just 22 miles from Anchorage in Chugach State Park. The scenic drive from the city runs along the Eklutna river and lake.

Surrounded by snow-capped mountains in Alaska's pristine wilderness, this beautiful turquoise lake is fed by the Eklutna Glacier. Explore Chugach State Park on your own or opt for a guided Eklutna UTV Tour into the Chugach Mountain range. You can also rent kayaks or bikes at the lake. Alternatively, cruise lines, like Royal Caribbean, feature cruise tour packages that include biking excursions.

The fairytale-like setting of Lake Bled in the Julian Alps is nothing short of magical. Located in northwestern Slovenia, the lake is 97 miles from the port of Koper. Many cruise lines call on that port, so there are several operators offering full-day tours you won't want to miss.

First, stop at medieval Bled Castle on the rocky cliffs overlooking the stunning bluish-green lake. This vantage point also provides the best views of the island with the famous Church of the Mother of God on the Lake. Tours include a cruise on Lake Bled in traditional wooden boats known as pletnas before stopping at the capital of Ljubljana on the way back to Koper.

Gatun Lake is an impressive man-made lake covering 166 square miles in Panama. Completed in 1912, the lake was formed by damming the Chagres River and is an integral part of the Panama Canal. Twenty miles of the 48-mile Panama Canal transit is along Gatun Lake.

Related: Pictures From a Panama Canal Transit on Celebrity Infinity

While your cruise ship will sail into or across the lake, you can book group tours from Panama City to explore the incredible biodiversity and wildlife thriving around the lake and in the Chagres River valley. Take a boat tour to see Guacha Island, a wildlife sanctuary located in the center of the lake. There are a known 100 species each of reptiles and mammals and 500 varieties of birds living in the surrounding forested areas.

Go in search of the mysterious Loch Ness Monster during your visit to Scotland. Loch Ness is the second-largest lake in the country at 788 feet deep and approximately 23 miles in length. Cruise lines, like Royal Caribbean, offer excursions from the port of Invergordon to Inverness, the capital of the Scottish Highlands and Loch Ness, about 37 miles from the port.

There are also independent tours that include Urquhart Castle, the medieval fortress that was the home to many ancient bloody battles, and Clava Cairns, a prehistoric site dating back 4,000 years. Before heading back to port, a trip to Scotland would not be complete without a nip of Scottish whiskey at Glen Ord malt whiskey distillery.

Austria's Lake District, also known as Salzkammergut, features breathtaking scenery straight out of a fairytale. Picturesque villages dot the shoreline along the 76 crystal-clear subalpine lakes surrounded by rolling hills with the Alps as the backdrop. This beautiful region is where many scenes from "The Sound of Music" were filmed.

Danube River cruises offer excursions to Salzburg and the Lake District from Linz. Stops include the lakeside town of Mondsee and Basilica St. Michael, where Maria and Georg von Trapp were married, and the market town of St. Wolfgang on Wolfgangsee Lake, known as a place of pilgrimage. In addition, some excursions include the picturesque lakeside village of St. Gilgen where Mozart's mother, Anna Pertl, was born.

Tour operators also offer private excursions that visit the oldest, most photographed and one of the most beautiful Alpine villages in Austria, Hallstatt.

Formed by glaciers over thousands of years, Lake Rotoiti and the other lakes in Nelson Lakes National Park have remained mostly untouched, hidden among forests in the mountains of New Zealand. Cruise line excursions to Lake Rotoiti depart from the port of Tauranga, a coastal town in the North Island region in the Bay of Plenty.

These tour offerings include kayaking to experience the beautiful scenery and abundant birdlife around the lake. Kayakers also have access to two major attractions that are accessible only by boat: the fascinating network of glow worm caves and the natural thermal hot pools. Take a moment to relax in the pools while learning about the legends of the Maori, the regions' indigenous Polynesian people.

Lake Garda is Italy's largest lake covering almost 100 miles of shoreline. Plan to arrive several days before your Mediterranean cruise to visit this beautiful region in Northern Italy. The scenery is Instagram-worthy. Medieval castles and quaint villages surround the crystal-clear waters of this picturesque lake with the Alps as a backdrop.

In the resort town of Sirmione on the southern side of the lake, tour the remains of Catullo Grotto, a Roman villa that is the largest in Northern Italy. Another highlight is the 13th-century "floating" Scaligero Castle. Regent Seven Seas offers a pre-cruise package that includes Verona and a trip to Lake Garda. Alternatively, take a day trip by train from Venice with transit times as fast as 1.5 hours or hire a private guide.

Located in the center of Cape Breton Island in Nova Scotia, Bras d'Or Lake is a saltwater tidal body of water covering 424 square miles. Cruise excursions from the port of Sydney include a scenic drive along the glistening waters of the Bras d'Or Lakes to visit the picturesque seaside village of Baddeck.

Baddeck is also the beginning and end of the Cabot Trail, which is known as "one of the most scenic drives on the planet." Admire the surrounding landscapes and the bald eagles as they soar overhead. Then take a schooner ride on the lake to see Alexander Graham Bell's mansion Beinn Bhreagh (Gaelic for "beautiful mountain") and a bird and game sanctuary, Spectacle Island.