You may also like
Dismiss
Best Shore Excursions in 30 Caribbean Cruise Ports
Your Guide to Half Moon Cay Cabanas
Your Guide to Castaway Cay Cabanas
Princess Cays vs. Half Moon Cay
The World's Best Beaches to Visit on a Cruise
What's Free at CocoCay? Here's What You'll Pay for the Perfect Day
Best Shore Excursions in 30 South Pacific Ports
10 Best Cruise Destinations for Hot Air Balloon Rides
Embarkation in Melbourne: Cruise Terminal Parking, Address and Amenities
10 Best Beaches in Mexico for Cruisers 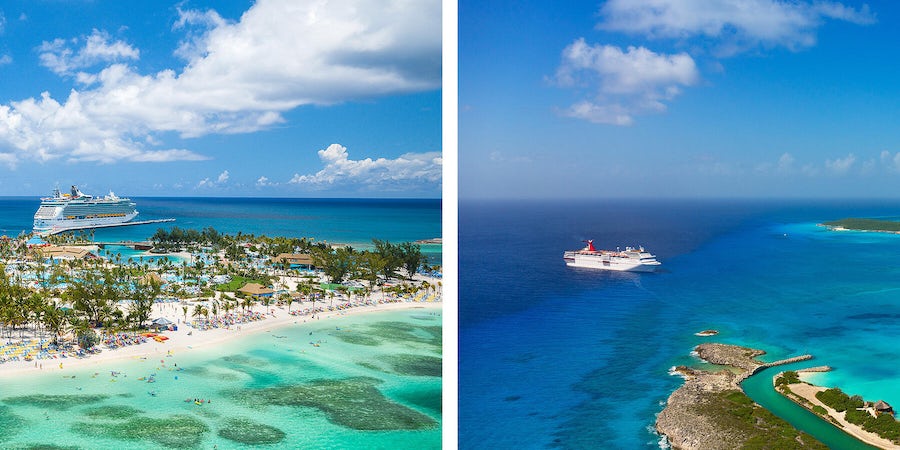 CocoCay vs. Half Moon Cay

Cruise passengers who roll up to Half Moon Cay are greeted with the sign "I Wish I Could Stay Here Forever," while over at another Bahamian private island, CocoCay, it's seemingly always a "Perfect Day."

Both islands are run by cruise lines: Half Moon Cay is used exclusively by Holland America and Carnival passengers, while CocoCay caters to Royal Caribbean cruisers. Regardless of which island you're on, after a day swaying on a hammock overlooking the turquoise ocean, that #privateislandlife seems more like a life goal than a clever hashtag.

Let's explore the amenities offered on each island to help you determine which port of call is best for your next cruise adventure.

Similarities Between CocoCay and Half Moon Cay

CocoCay and Half Moon Cay are both private islands in the Bahamas, located about 150 miles from each other. You can only access these islands as a cruise passenger, so the name of the game in both destinations is primarily relaxing and having fun.

Crowd potential: Because both Carnival and Holland America ships call on Half Moon Cay, this port can become busy if more than one ship is in port. Likewise, CocoCay has the capacity to host two Oasis-class Royal Caribbean vessels. These occasions can lead to larger crowds and reduced availability for island amenities.

Snorkeling: Bring your snorkeling gear with you to both islands (or plan to rent it). You'll be rewarded with crystal-clear views, whether you do it on your own or as part of a guided tour.

Tram service: Tram service is available for free on both islands. CocoCay's tram runs every 15 minutes and makes stops at all of the island's major attractions. On Half Moon Cay, the tram runs continuously from the Welcome Center to the buffet, Tropics Restaurant.

Rentals: On both islands, you'll find rental options for standup paddleboards, kayaks, floating ocean mats and cabanas (if they're available).

Shopping: Passengers will find the usual assortment of cruise line logo clothing and accessories in small shops on both Half Moon Cay and CocoCay. There are also straw markets on both islands offering locally made handicrafts and specialty souvenirs.

Differences Between CocoCay and Half Moon Cay

Island size and characteristics: Half Moon Cay measures a whopping 2,400 acres compared to CocoCay's 140 acres. Most of the land on Half Moon Cay's interior is undeveloped, though, and functions as a nature preserve. Facilities take up about 50 acres, whereas there is more development throughout CocoCay, particularly with the addition of the water park and other attractions as part of the Perfect Day at CocoCay upgrades.

Beaches: Half Moon Cay is a larger island than CocoCay, but there are more separated beach and lounge spaces on CocoCay. The 2-mile-long white powdery beach on Half Moon Cay consistently earns high marks among cruise passengers, while the three beach areas and pool spaces on CocoCay allow people to hop from place to place to enjoy different atmospheres.

Dining: Because Half Moon Cay has a smaller facility footprint than CocoCay, you'll find more dining options on the latter. There's just one complimentary island restaurant on Half Moon Cay: Tropics Restaurant, which serves a barbecue lunch buffet, including burgers, jerk chicken, fish tacos and hot and cold side dishes. Passengers can also opt for fee dining at Lobster Shack for fresh seafood dishes such as a lobster roll or chowder.

Compare that to two free restaurants on CocoCay (Skipper's Grill and Chill Grill), also offering an array of barbecue dishes, including ribs, burgers, sandwiches and salads; along with two free snack venues and Captain Jack's, offerings wings and fries for a charge..

Bars: Though bars on both islands are always within easy walking distance, the main difference is that you can use any shipboard beverage package you've purchased on CocoCay. On Half Moon Cay, drinks are all priced a la carte, or you can buy a separate drink package just for the island.

Cabanas: You can use the plentiful lounge chairs and hammocks on both CocoCay and Half Moon Cay for free, but for additional privacy, you might wish to rent a cabana or villa. Your options are slightly different on each island. Umbrellas are free on CocoCay.

You'll have a variety of cabana choices on CocoCay, starting at $299 for the most basic and going upward of $1,549 for over-the-water versions. On Half Moon Cay, the multicolored cabanas are air-conditioned, and the starting rental fee is $280 per day. Two-story villas start at $500 and an over-the-water version with capacity for 12 to 25 people starts at $1,500.

Getting there: To access Half Moon Cay, you'll need to tender to the pier from your cruise ship, while at CocoCay, a dock that opened in spring 2019 allows passengers the ease of walking right off the ship onto the island.

Activities and attractions: As part of the $250-million "Perfect Day at CocoCay" renovation project, CocoCay is now characterized as a veritable cruise passenger amusement park, with record-breaking waterslides, a freshwater pool, wave pool and even a balloon ride, in addition to other thrilling adventure-oriented attractions.

Though Half Moon Cay also has a free Aqua Park for kids, it's on a much smaller scale with gentle slides best suited for little ones. The excursions here are more focused on enjoying the natural surroundings of this secluded space, including stingray encounters and even horseback riding. Walkers and joggers might like the chance to shake off their sea legs on Half Moon Cay's 3 miles of paved trails.

Despite their proximity to each other, these two islands are essentially different in most of their offerings. Depending on what types of activities appeal to you best, you'll find the most variety, adventure and bells and whistles on CocoCay. Half Moon Cay, ranked highly by cruise passengers for its natural beauty, is best suited for a relaxing beach day away from the ship.