You may also like
Dismiss
12 Things You Can Only Find on Norwegian Cruise Line
Cruise Costs: Is Carnival Good Value for Money?
Pacific Explorer: What's Free -- and What's Not
Norwegian Cruise Line History
8 Worst Cruise Rip-offs Not Worth Your Money
5 Mind-Blowing New Cruise Attractions of 2018
10 Cruise Alcohol Hacks for Better Drinking on the Cheap
Where to Find Starbucks on Cruise Ships
9 Free Things to Do on Norwegian Encore
Pictures of Norwegian Encore 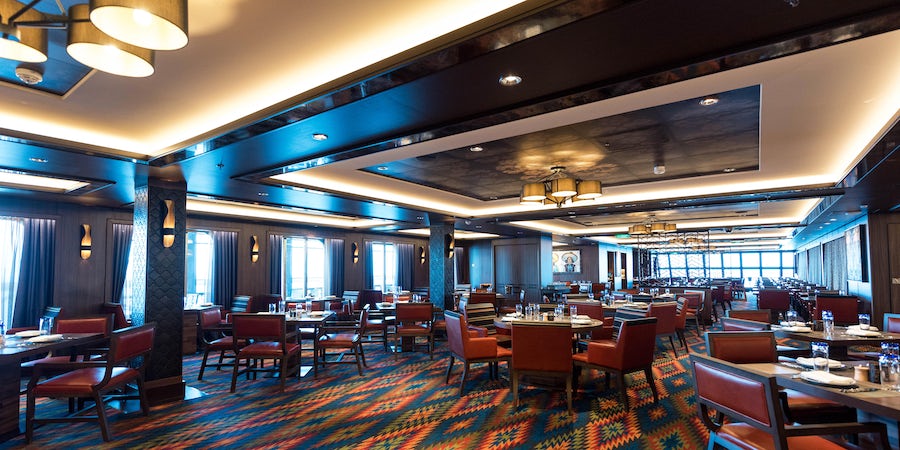 This dinner-only Mexican cantina is a great casual option, perfect for families, but it's only available on two Norwegian cruise ships.

Los Lobos looks different on each ship because on Norwegian Bliss it was custom built, whereas on Norwegian Dawn, the restaurant was carved out of a portion of the buffet. However, both venues aim for an authentic and colorful Mexican feel.

On Norwegian Bliss, Mexican art adorns the walls and the brightly colored carpet evokes the patterns of a traditional Mexican blanket. The venue is spacious and includes an alfresco dining section. The Norwegian Dawn version is much smaller, but skull art arrangements add pops of color and large floor-to-ceiling windows bring in lots of light.

Choose from standard, gringo-friendly Mexican specialties, such as fresh guacamole prepared tableside and served with an array of chips, quesadillas (shrimp, chicken or cheese), fish or pork tacos and enchiladas. House specialties come with rice and beans and include red snapper Veracruz and a burrito rojo.

Desserts include tres leches cake and chocolate flan, as well as homemade ice cream. And, of course, you can order an array of handcrafted margaritas and tequila drinks, including Mexican coffee with dessert.

If you can't decide what to order, consider sharing with your dinner companions. You'll get two or three tacos or enchiladas per order so easy to split.

Related: How Not to Gain Weight on a Cruise

Los Lobos has a la carte pricing, so passengers pay for what they eat rather than a flat cover charge. Prices range from $3.99 for tortilla soup to $9.99 for fish tacos or enchiladas verdes up to $19.99 for a carne asada dinner with rice and beans.

Editor's Note: Menus and prices are samples only and are subject to change by ship and itinerary.

Which ships have Los Lobos?

Los Lobos is found on the following Norwegian ships: