You may also like
Dismiss
7 Reasons Why Brits Will Love a Round-Britain Cruise
Best Cruise Ports to Explore by Bicycle
Titanic 2: Everything You Need to Know
Sail Here, Not There: Avoiding Overtourism in Cruise Ports
Best Cruise Ports for Horseback Riding Tours
Visas for Cruise Travel to the UK and Europe
Cruise Activities You Can Re-create at Home: Shore Excursions
48 Hours in Auckland Before or After a Cruise
48 Hours in Brisbane Before or After a Cruise 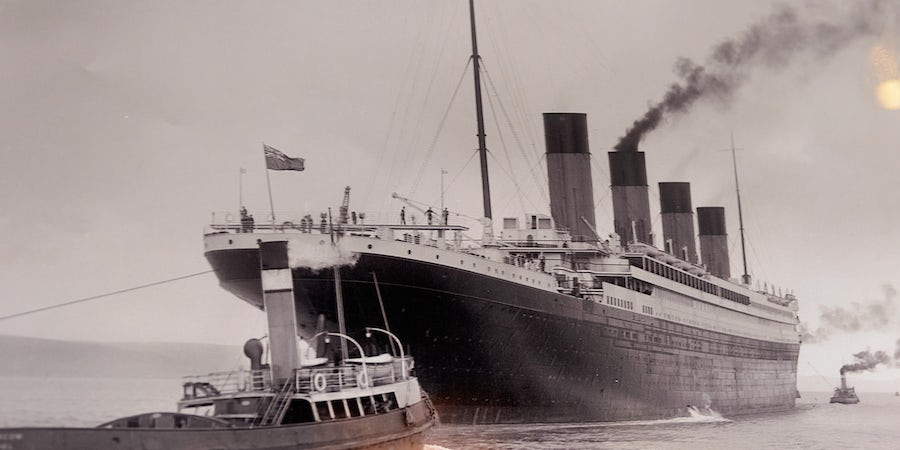 Titanic Memorials and Historic Sites You Can Cruise To

Titanic, a White Star Line ship rumored to be "unsinkable," struck an iceberg off the coast of Canada during its maiden voyage and sank in the early hours of April 15, 1912. Although the ill-fated vessel went down more than 100 years ago, it remains the worst cruise tragedy of the modern age, having killed more than 1,500 passengers and crew.

Many memorials have been dedicated across the globe in honor of the people who died, and several historic places tied to the ship are still standing. So, whether you're a history buff or just a fan of Leonardo DiCaprio, here is our list of the top Titanic-related places you can visit on your next cruise.

. The Titanic Experience features six floors of history, including what went into building a ship of Titanic's size and what life and industry were like in the city more than a century ago. To visit, you can book a cruise ship-sponsored shore excursion during a call on Belfast, or make your own way there after purchasing a

that also allows access to SS Nomadic, Titanic's fleetmate and the only remaining ship from the now-defunct White Star Line.{#widget:itinerary_list|id:715#}

Who built the Titanic? Shipyard Harland and Wolff, a Belfast company that's still in operation, claims that feat. Look for the two large, yellow, iconic Harland and Wolff cranes next to Titanic Belfast, and you can see where the behemoth ship was constructed from 1909 to 1912. Although the Harland and Wolff shipyard now focuses more on cargo vessels, its legacy lives on. During an organized

, you can see the original building that served as the company's headquarters and housed the drawing office where Titanic was designed. You'll also pass the slipways where the ship first touched water and descend to the bottom of the dry dock where construction took place.

, which displays photos of and letters from some of the ship's passengers, as well as little-known facts about the ship (like how many cases of tennis balls and how many oyster forks were carried onboard). One of the most interesting parts, however, is at the end of the exhibit, where visitors can sit in a mock courtroom to learn what happened after Titanic sank -- accounts from those involved, who was held responsible and which new safety measures were enacted as a result. The museum can be easily reached via Uber or a taxi from the train station, the cruise ports or any spot downtown.

Lovely but haunting Fairview Lawn Cemetery in Canada's Halifax, Nova Scotia, has come to be known as the "Titanic cemetery." After the ship's sinking, many of the bodies were brought to Halifax to be processed. Fairview Lawn now serves as the final resting place for 121 passengers and crew, more than 40 of whom were never identified. Stops at the cemetery are standard on most Halifax

, which can be booked either through your cruise line or independently.

At the insistence of the infamous Margaret "Unsinkable Molly" Brown, New York's Titanic memorial was built -- originally on top of a church overlooking the East River. It featured a working time ball that would descend a pole each day at noon. In 1976, the memorial was donated to the South Street Seaport Museum and relocated to the corner of Fulton and Pearl Streets, next to the museum building. Although the timepiece no longer functions, the memorial is still worth visiting if you have an interest in all things Titanic. Follow it up with a visit to the seaport museum for an even bigger dose of maritime history.

often include a visit to the South Street Seaport and a stroll past the Titanic memorial.{#widget:itinerary_list|id:716#}

Following your visit to Titanic Memorial Park, take the subway, a taxi or an Uber to Pier 54 at Chelsea Piers. Formerly belonging to the White Star Line, Pier 54 was slated to be Titanic's pier in New York when it docked at the conclusion of its maiden voyage. Although the White Star Line no longer exists, the eerie remnants of the dilapidated dock are left to remind us all of the ship that never arrived.

If you're a fan of Titanic history and your cruise starts or ends in Port Canaveral, make your way to "

." In addition to re-creations of the promenade, boiler room and grand staircase, the exhibit houses more than 300 artifacts rescued from the actual ship. Plus, costumed actors play the roles of famous passengers to give the experience a more immersive feel, and visitors can check out memorabilia from James Cameron's "Titanic" film. A trip to the museum takes just a couple of hours, making it particularly suitable for travelers with small children, limited time or both.