You may also like
Dismiss
Summer Cruises vs. Winter Cruises
Best Time for a Rhone River Cruise
Coastal Cruise Tips
The Best Month to Cruise Hawaii
Best Months to Cruise the Mediterranean
Monaco Grand Prix Cruises
7 Ways for Seniors to Save on a Cruise
10 Things You Should Never Do on a Cruise Line Private Island
Pictures From the Turner Classic Movies (TCM) Cruise
9 Best Beaches in Puerto Rico for Cruisers 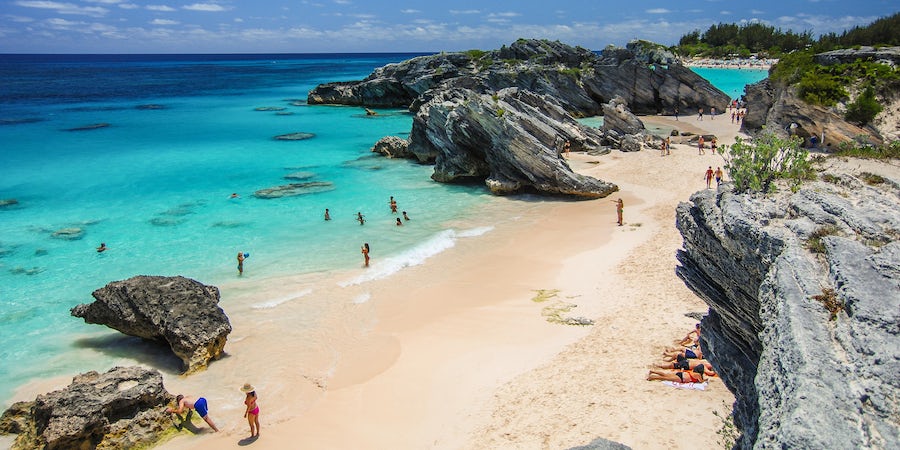 Best Month to Cruise to Bermuda

The sparkling turquoise waters and pink sand beaches of Bermuda might rival those found in the Caribbean, but these British isles offer a more temperate, subtropical climate. Cruisers unfamiliar with the archipelago -- located 650 miles off the coast of North Carolina -- might be surprised to discover that the cruise season runs only from April to November -- likely because winter temperatures drop to the mid-50s from their summer highs of mid-80s. Bermuda does not have a rainy season, but it is located in the hurricane belt.

Bermuda cruises can be as short as four or five nights. Longer itineraries that call on Bermuda may include parts of Canada, the Caribbean or even Europe. Which month you choose to cruise will depend on the length and type of itinerary you prefer and the activities that appeal to you most.

Looking for the best month to cruise Bermuda? We've outlined the cruise season so you can make the comparison. The prices quoted are per person, double occupancy and cruise-only fares.

April: The Best Month to Cruise to Bermuda

Why: April is considered the best month to cruise to and visit Bermuda. The weather warms into the 70s, and it's a festive time to visit with the Easter holiday and other exciting events taking place on the island. It's also the perfect month to explore British colonial sites, photograph the island's pastel-colored buildings or go shopping in Hamilton. In addition, golfers will appreciate playing one of the island's six world-class golf courses in the cooler weather.

Pricing: With April being the start of cruise season, fares are lower than at other times of the year. We found sailings on several lines, including Norwegian and Royal Caribbean, priced under $100 per night.

Temperature: Wake up to mornings in the low 60s. Afternoon highs are typically in the low 70s.

Rainfall/sea conditions: April is traditionally the driest month of the year next to May. The sea conditions should be calm this time of year.

What to pack: Bring lightweight clothes you can layer for cooler morning temperatures and then remove them as the day begins to warm up. Sea days may be cooler along with evenings after sunset, so pack accordingly. Bring sunscreen and a wide-brimmed hat to guard against sunburn early in the season.

Festivals: Easter is a lively time to be in Bermuda. Local traditions for the holiday include dining on codfish cakes and hot cross buns. Everyone can attend the kite flying event at Horseshoe Bay Beach on Good Friday. This stunning beach is known as one of the most Instagrammed beaches in the world.

The end of April is also the beginning of the renowned Bermuda International Invitational Race Week. This yacht race hosted at the Royal Bermuda Yacht Club attracts the best sailors from around the world.

Watch out for: There are several other events in April including the World Triathlon Bermuda and the Peppercorn Ceremony. You may want to plan your cruise around attending some of these festivities and cultural activities, so check to make sure you're in port on those days. Also, make dinner reservations far in advance if you want to dine out in Bermuda during these busy times.

Why: This is the beginning of the beach season in Bermuda. As temperatures rise and summer vacations begin, it's also one of the busiest times of the year. May is traditionally the second-best month to cruise to the island after April, but June is also a good choice. May and June offer additional chances to experience one of Bermuda's most popular pastimes, yacht racing, with two big events held at the Royal Bermuda Yacht Club and two other famous races.

Temperature: May's temperatures will range between the mid-60s and mid-70s. June's temperatures are still pleasant with lows in the 70s to highs in the low 80s.

Rainfall/sea conditions: May is historically the driest month of the year but expect to see some showers in June. The showers are usually short-lived, intense and occur mostly in the evenings. The seas should be calm in May, but June is officially the start of hurricane season.

What to Pack: Bring a lightweight rain jacket or poncho for the occasional shower on excursions. It's also time to pack bathing suits and cover-ups for trips to the beach and the pool onboard the ship.

Festivals: The Bermuda International Invitational Race Week continues into the first week of May. Antigua Bermuda Race is the next event where the yachts set sail from Charlotte, Antigua, to Bermuda. End May with the colorful festivities of Bermuda Day. The parties, parades and music last all weekend long at this celebration in Hamilton.

Watch out for: May and June are busy and crowded months with the international yacht races and Bermuda Heroes Weekend. Plan in advance if you're going to book excursions with private tour operators on the island or want to make reservations at local restaurants.

Why: These are the hottest months in Bermuda, so it feels more like cruising in the Caribbean. During this period, big-ship lines offer anywhere from four- to nine-night itineraries. Oceania Cruises offers a few weeklong sailings round trip from New York in August. In September, Disney Cruise Line enters the market with a five-night sailing from New York City.

Pricing: July's fares are the highest of the three months ranging from $100 to $200 a night. August's rates are a little lower. Most prices in September average around $100 per night.

Temperature: Morning lows will be in the mid-70s with afternoon highs in the mid-80s. Temperatures in the 90s are rare but can happen during these months. It's also hot and muggy, but look for breezes that can temper the heat.

Rainfall/sea conditions: Thunderstorms do occur late afternoons and early evenings. These contribute to the humidity. Though these months are part of hurricane season, the Bermuda Weather Service says the island only sees damage from a tropical cyclone every six or seven years.

What to pack: Break out the Bermuda shorts, sundresses and flip flops. As the temperature heats up, now's the time to wear casual and breezy lightweight clothes. If you plan to have dinner at a nice restaurant in Bermuda, some establishments require men to have button-up shirts, so pack one or two dress shirts just in case.

Festivals: The Bermuda Triple Crown Billfish Championship takes place in July. This event celebrates the best anglers and boats afloat with three tournaments where participants fish for this predatory species.

Cup Match is a two-day event in August centered around cricket games, but there are also beach parties, music and plenty of food and imbibing. The culmination of Cup Match takes place during the Non-Mariners Water Raft Up on Sunday. Almost every seaworthy (and not so seaworthy) vessel participates. It's one gigantic floating party.

Watch out for: Reapply sunscreen frequently with the sunny days and high temperatures. When you're not at the pool or beach, it's easy to forget, but attending the events exposes you to just as much sun. These months are also busy times on the island, so plan if you want to frequent the festivities, book onshore excursions or dine at favorite restaurants.

Why: October is a pleasant time of year to visit Bermuda as the weather is warm and there are fewer tourists with schools back in session and summer vacations over. Also, all of the fishing and yachting tournaments have ended for the year. Just four cruise lines offer itineraries to Bermuda during October, so plan accordingly if this is when you want to travel.

Pricing: Fares for a five-night itinerary in October are as low as $90 for an inside cabin and $92 for a seven-night cruise.

Temperature: Morning lows will hover around the 70s and the afternoon highs in the upper 70s. The ocean temperature is still warm, but it will get colder toward November.

Rainfall/sea conditions: October can have more rain than other months. Expect some clouds along with the sun. October is also still in hurricane season, so there is the potential for storms.

What to pack: Bring a breathable waterproof jacket for rainy days or showers. It's still warm, so lightweight layering pieces are the best option, with shorts or sundresses for the hottest parts of the day. You'll also want warmer clothes for sailing in and out of East Coast ports and sea days.

Festivals: Culinary enthusiasts will want to attend the City Food Festival in Hamilton. The capital of Bermuda is host to an all-day food and wine event with tastings and cooking demonstrations. There's also a chef competition over three days. Sample local and international specialties during your time ashore.

Watch out for: There are not as many events scheduled this time of year, so plan to explore all Bermuda has to offer, including its colonial history. It's also the perfect time to go shopping for deals at the end of the season and make reservations at restaurants that aren't available during the summer months.

Why: November is the last month to cruise to Bermuda until sailings resume in April. The weather is still lovely for sightseeing and touring. The month of November also has less rain than October, and it's past hurricane season. In addition, Bermuda will be quieter now than at other times of the year. There are only a few sailings to choose from during November since it is the end of the Bermuda cruise season.

Pricing: Norwegian Cruise Line is the only big-ship cruise line operating this route in November. Fares start under $100 for an inside cabin. Sister luxury line Regent Seven Seas has one cruise here, as well, with suites averaging $420 per night.

Temperature: The mornings will be a bit cooler with average highs around 65 degrees. Afternoons will see warmer temperatures around 75 degrees.

Rainfall/sea conditions: There will be some rain and possibly windy conditions. These may make the seas a bit rough, but it's past the official hurricane season.

What to pack: Bring warmer layering pieces, especially for early mornings, evenings and time spent onboard the ship.

Festivals: The World Rugby Classic takes place in early November and lasts a week. If you're a rugby fan, now's your chance to join other enthusiastic attendees and cheer on your team with a pint. There are also parties and concerts where you can hang out with some of the best rugby players in the world.

Related: Theme Cruises: What You Need to Know

Watch out for: Plan in advance since the selection of ships, lines and itineraries are limited with this being the last month of the cruise season.

There are no cruises during the winter months due to the colder weather. December, January and February are low-season in Bermuda because temperatures average in the 50s and 60s. The month of March sees more tourists on the island, but it's still chilly.