You may also like
Dismiss
Carnival Breeze vs. Magic vs. Dream
6 Best Cruise Lines for Dads
Carnival Cruise Line History
Meet the Chefs on Princess Cruises
What Is Fun Ship 2.0?
Cruise Vision 2020: The Future of Cruising in Australia and New Zealand
New Cruise Ships 2020
5 Things to Love About Carnival Radiance
Cruise Critic Members Shout Out a Few of Their Favorite Crew
What Happens to Cruise Ships That Are Slated to Be Broken Up? 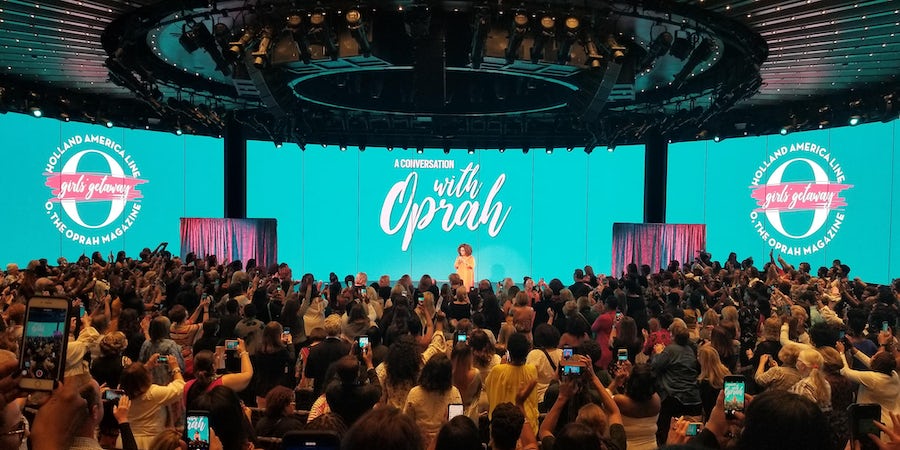 Oprah, Pitbull and 5 Other Cruise Line Celebrity Ambassadors Making a Splash at Sea

A famous name linked to a cruise line can catch the eye of would-be cruisers and get them excited about sailing. Some celebrities serve as godmothers for just one ship or make appearances only on chartered theme cruises, but several A-listers partner with a specific cruise line itself, participating at intimate signature events and activities or lending their passion or expertise through programming, promotion or even ship design.

If you're stoked about seeing stars, we've rounded up some of the most well-known cruise line celebrity ambassadors making a splash at sea.

In addition to his legendary dominance on the basketball court, New Jersey native Shaquille O'Neal is also a rap star, a reality TV host and restaurateur. Now, he has another distinction: He's Carnival's first Chief Fun Officer, anchoring the brand's "Choose Fun" campaign that launched in 2018.

O'Neal, currently a television analyst with "Inside the NBA" on TNT, had never cruised before becoming Carnival's latest brand ambassador, and he's now sailed aboard several ships including Horizon and its sister ship Vista. In addition to starring in a number of playful Carnival videos and ads, including his viral 30-second whirlwind tour documenting a week's worth of cruising fun, O'Neal has coached several onboard basketball games where passengers won a free cruise.

O'Neal is also set to launch one of his Big Chicken eateries aboard Carnival Radiance in 2020.

When Grammy Award-winning Miami-born rapper Armando Christian Perez -- aka Pitbull, aka Mr. Worldwide -- became godfather to Norwegian Escape in 2015, it came as no surprise to cruisers who sail the line, which is known for its high-energy entertainment.

Since partnering with Norwegian, Pitbull has hosted several Pitbull After Dark Parties at sea on Norwegian Pearl and Jade, along with onboard Q&As. He has also selected custom cocktails crafted from Voli Vodka, which are served aboard several Norwegian ships.

Pitbull also surprised passengers by showing up at the inaugural Bliss preview cruise out of Seattle in 2018, and his song "March to the Beat" anchors Norwegian's ads promoting the line's free offers.

Getting girlfriends to embark with TV and film star Oprah Winfrey and her BFF Gayle King was an easy sell when Holland America announced a three-day "Adventure of Your Life" getaway cruise. It set sail in early 2019 aboard Nieuw Statendam, for which Winfrey was named godmother.

The besties, along with other members of O, The Oprah Magazine staffers, hosted exclusive events and special presentations springboarding from the publication's "Live Your Best Life" mission, including style sessions, book club discussions and live Q&As with Oprah.

The cruise line has partnered with Winfrey since 2017, when it sponsored a series of O, The Oprah Magazine-inspired sailings that included meditation classes and cooking demos. Holland America also sponsored another wildly successful seven-day cruise to Alaska with Winfrey in 2018. Passengers on these sailings could also pick up some of Oprah's Favorite Things at shipboard boutiques.

For Royal Caribbean, Shay Mitchell, award-winning Canadian actress of "Pretty Little Liars" fame, proved to be a smart choice as the brand's first Adventurist in 2017. An avid traveler who shares her adventures -- including skydiving in Dubai and hot-air ballooning over Morocco -- via her massive social media platforms and popular YouTube Series, "Shaycation," Mitchell has teamed up with RCI to develop a series of destination stories about cruising the Caribbean.

Mitchell has sailed on several Royal Caribbean ships as she continues to promote "Shay-recommended adventures" -- essentially, recommended active pursuits in port and onboard -- that align with the cruise line's "Come Seek" brand campaign. (For example, in St. Maarten, she participated in a high-speed yacht race shore excursion followed by a ride on a Rhino Rider, an inflatable motorboat.) She also joined passengers aboard Oasis of the Seas to experience the ship's ziplines, FlowRider and rock wall.

Beloved by several generations for his portrayal of Captain Merrill Stubing on "The Love Boat," award-winning actor Gavin MacLeod has served as Princess Cruises' Global Ambassador since 1986, the year the iconic television series broadcast its last episode after 10 seasons on the air. The show, which took place onboard one of the three Princess ships sailing at the time, introduced millions of viewers to the world of cruising, no doubt inspiring them to set sail.

As the cruise line's brand ambassador, MacLeod, now 88, has promoted Princess Cruises through thousands of public appearances at conferences and onboard much of the fleet. The actor also landed a role as celebrity judge on the cruise line's latest singing competition, "The Voice of the Ocean."

In July 2016, Princess honored MacLeod for 30 years of partnership with a special ceremony attended by hundreds of fans in Santa Clarita, California, and hosted by actress Jill Whelan (who played MacLeod's TV daughter, Vicki).

MacLeod also wrote the best-selling book, "This Is Your Captain Speaking: My Fantastic Voyage Through Hollywood, Faith and Life."

Renowned interior designer and television personality Nate Berkus -- made famous from his regular guest appearances on The Oprah Winfrey Show -- parlayed his love of travel into an exciting role when Celebrity Cruises approached him in 2017 to help design its newest $5 billion Edge-class ships.

Related: First Look at Celebrity Beyond: Why Celebrity Cruises' Newest Ship Has the Edge

As Edge's Design Ambassador, Berkus shares his vision of modern yet timeless design at sea by elevating the brand's look and bringing the outdoors inside. Working with the ship's interior designer, Kelly Hoppen, Berkus used 3D technology during the design process, such as wearing VR goggles to test the view from various spots onboard.

A cruising newbie, Berkus has since began enjoying sailing onboard, hosting the ship's naming ceremony in December 2018 and sharing his favorite spots on Edge along with must-see port destinations in various media outlets. Berkus also hosted other Edge-class reveal events and is featured in several brand videos before the ship's launch.

Experienced cruisers track weather patterns and trends like no other travelers, especially if they plan to sail during hurricane season. So when Royal Caribbean named seasoned TV weather guru James Van Fleet as its Chief Meteorologist -- an industry first -- it was seen as a smart move.

Related: Atlantic Hurricane Season Cruising: What You Need to Know

After all, passengers are likely to appreciate a pro forecaster advising the cruise line on a regular basis. Plus, Van Fleet is engaging, with a terrific sense of humor, as evidenced in his many videos and social media posts promoting his partnership with the brand and relaying cruise-impacting weather forecasts.

With 20 years of weather-watching under his belt, Van Fleet is adept at explaining storm patterns to the cruise line's passengers and fans. When the weather takes a swift turn, Van Fleet, the captain and the marine operations team work together to make decisions about potential itinerary changes or whether an outdoor show in the AquaTheater needs to be canceled.