You may also like
Dismiss
What to Expect: Cairo, Egypt
7 Challenging Cruise Ports We Can Help You Navigate
Tips for Safe Travels Following Terrorist Attacks
6 Things to Expect When Cruising to Potentially Unstable Areas
Exotic River Cruise Tips
Countries That Require Visas for a Cruise
Nile River Cruise Map
Mekong River Cruise Map
New Cruise Itineraries From Every Australian State
The 10 Most Popular Episodes of “Cruising with Jane McDonald” 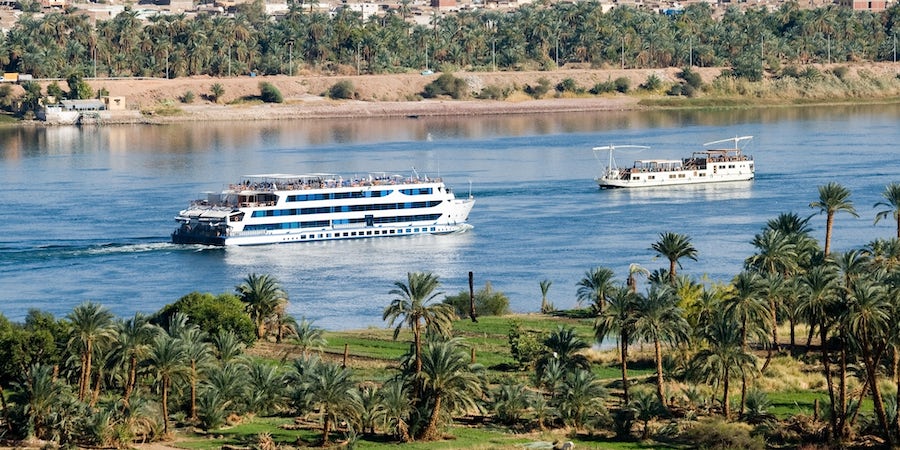 Is It Safe to Cruise the Nile River?

Egypt had a tough time throughout the Arab Spring uprising and in its wake. 2011 was the beginning of years of political instability and terrorism-related disasters for the country. Tourism figures plummeted from 14.7 million in 2010 to around 5.4 million in 2016, bringing Nile cruises almost to a standstill. Now, though, visitor numbers are on the increase again. Some 8.3 million visitors came in 2017 and the 2018 figure was an impressive 11.6 million. So what's changed? Is it safe now to cruise the Nile?

New Optimism on the Nile

There's certainly a buzz on the Nile; you can really feel the optimism in the air. Ancient temples are being spruced up, souvenir vendors no longer appear so desperate and, once again, the banks of the river at Luxor are stacked four deep with riverboats. Now, in fact, is a good time to visit, security advice permitting. The temples and historic sites are getting busy again but aren't under the same pressure -- yet -- as in years gone by, when you had to push through a sea of selfie sticks to get a good photograph.

It's not all good news. The U.S. Department of State advises "increased caution" when traveling to Egypt. Australia's Department of Foreign Affairs and Trade says "terror attacks could occur at any time," suggesting Australians "reconsider the need to travel" to Egypt. The UK's Foreign Office gives the most popular stretch of the Nile, Abu Simbel and Cairo the OK to visit, with caveats.

You'll see high levels of security everywhere along the Nile but this is reassuring rather than intrusive. Airport-style metal detector gates are positioned at the entrance to every attraction, hotel and cruise ship. Prepare for bag searches, too; it's best to travel light on day trips. You'll see guards standing around all the temples, too. At the airports themselves, security is extremely tight and you'll go through multiple X-rays and checks, including extra random checks at the boarding gate, so allow plenty of time and be patient.

While there are still a lot of older Nile cruise ships laid up, operators are investing at the top end with new confidence. Viking, for example, launched the 52-passenger Viking Ra in 2018, having stripped the ship down to its hull and rebuilt it as a high-end vessel. The ship is almost fully booked for 2019 and 2020; another new ship, Viking Osiris, is being built for 2020. Abercrombie & Kent's luxurious Sanctuary Sunboat IV underwent complete renovation in 2018, while Uniworld is building an ultra-luxurious riverboat, SS Sphinx, to debut in January 2020 and sail alongside its existing ship, River Tosca.

The Egyptian government is investing in tourism infrastructure to woo visitors. The long-awaited Grand Egyptian Museum, a billion-dollar display of antiquities near the Pyramids of Giza, is due to open in 2020, although there have been many delays. The museum promises to be spectacular; it's five times the size of the Egyptian Museum in Cairo and will document 7,000 years of Egyptian history, with one exhibit showing the entire collection of 5,400 objects recovered from Tutankhamun's tomb.

More prosaically, the government is investing in practical matters, too. For example, because there are so many boats docked in Aswan, where the Nile is narrow, new moorings are being developed all along the banks further out of town. Everybody wins here; locals will be able to see the river again and passengers won't have to clamber across three other ships to get to their own.

Although visitor numbers are looking healthy again, travelers to Egypt should still heed the mass of safety advice; ultimately, it's up to you to decide whether to travel. If you do, avoid political gatherings, places of worship and large crowds. Always carry ID. Only visit the areas deemed safe; avoid the Sinai Peninsula, for example, or any land borders. Road trips across the desert between the Red Sea beach resorts and Luxor will involve traveling in convoy and there will be military checkpoints.

There are other threats, too. Be careful what you say on social media; strong criticism of Egypt and its government can lead to arrest. But having said all this, the vast majority of visits are trouble-free and the biggest issue facing tourists is stomach upsets. Take the usual precautions here. No ice in drinks, unless you're absolutely certain of its provenance. Bottled water only. No salad, no unpeeled fruit and a great deal of hand-washing. Nobody wants their vacation ruined by "pharaoh's revenge."