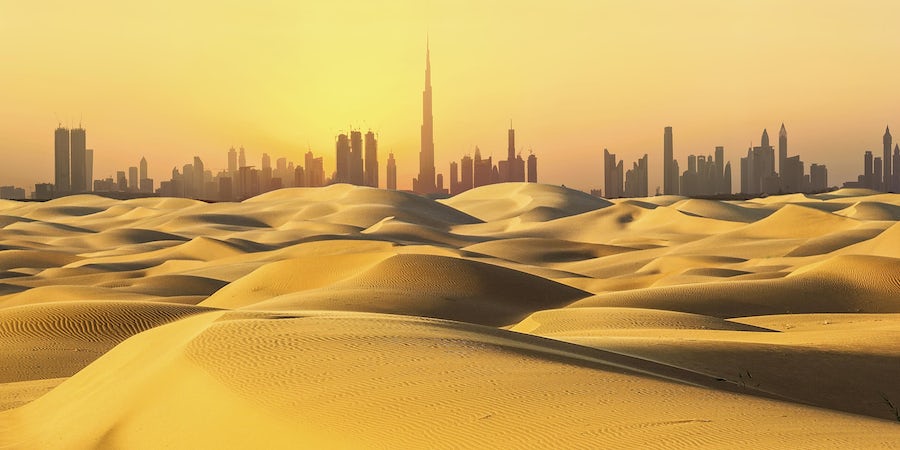 The Arabian Gulf is back in fashion, with more cruise lines than ever operating out of Dubai and Abu Dhabi. Fresh investment and innovative cultural attractions have really broadened the appeal of the region. There's a terrific buzz about Dubai, while Abu Dhabi is inordinately proud of its beautiful new Louvre museum. Meanwhile, the opening of Sir Bani Yas as a semi-private beach resort has added a whole new dimension to Gulf cruises.

True, most lines seem to offer the same set of shore excursions, but the scope is certainly getting broader -- there's much more emphasis now on food, adventure and culture than merely shopping. You could organize a lot of the following tours yourself but with the usual caveat of timing; the traffic in Dubai, in particular, is extremely busy, so getting to your destination can take ages and getting back to the ship on time can be stressful. The tours are all guided, too, so convenience aside, you'll learn more.

Here are some of our favorite shore excursions on a cruise to the Middle East.

Dubai's newest attraction, the Dubai Frame, is exactly that -- a mammoth, gold picture frame structure, 492 feet high, towering over the green Zabeel Park. Opened in 2018, the sole purpose of the Frame is to provide yet another view of the city, and while the attraction is sheer gimmickry, it's a lot of fun. The Frame is supposed to be a link between old and new, with views to the Dubai Creek and souks of Old Dubai to the north, and the shimmering high-rises of "new" Dubai to the south (although in reality, pretty much all of Dubai looks new nowadays).

For a nominal fee, visitors walk in through an exhibition of past Dubai, once an unrecognizably sleepy pearl-fishing village alongside a creek. Then, whizz 48 floors up in an elevator to the "Bridge," the top edge of the frame, for the view and, if you dare, 305 feet of transparent floor, which takes some getting used to. Before the exit, there's an exhibition of future Dubai, a vision of 2050, with cars flying between the skyscrapers.

The much-loved cruise liner, Cunard's former Queen Elizabeth 2 (known as the QE2), is now a smart hotel and function venue, a five-minute taxi ride from the cruise terminals. It's not sold as an excursion, but most cruise lines sell tickets for the guided tour -- if they don't, there's a ticket booth in the Port Rashid terminals.

QE2's new owner, a subsidiary of the Dubai government, has done an impressive and sensitive job renovating the iconic liner, keeping much of its heritage intact. Fans should not be disappointed.

You'll go in small groups through the public areas, starting at a new exhibition space on the dock, full of QE2 artifacts and memorabilia, before boarding and visiting the Chart Room, the Queens Grill and the Golden Lion Pub.

Tickets cost nearly $50 per person, but about 60 percent of the fee can be used toward food and drink. The revamped Lido does a stupendous Middle Eastern lunch buffet, so it's worth it.

At the Top, Burj Khalifa

All cruise lines offer an excursion that whizzes you to the observation deck at the top of the world's tallest building. Entrance tickets are timed, so make sure you get a tour that will have you on the 124th floor for sunset.

The views extend for miles: toward The Palm development, you'll see the sail-shaped Burj Al Arab hotel and the splotches of sand that will one day make up The World, another lavish offshore residential project, this one in the shape of a world map. Looking north, you can see the skyscrapers of Sharjah, the next Emirate along and to the east, the dusty desert.

After time at the top, hang around the musical fountains at the base to see the spectacular shows every 30 minutes, when the fountains "dance" to opera and power ballads. There's a great atmosphere here; the area is packed with bars and restaurants and buzzing with families after sunset. If your ship is in port for the evening, it's worth ducking out to spend a few hours here; try some local food and get a taxi back to the ship.

Who needs a roller coaster? Screaming up to the top of a curve of sand dune in a Land Cruiser, teetering on the top and then plummeting down the other side -- skidding sideways, plumes of sand flying -- is a real thrill. Desert safaris are offered from both Dubai and Abu Dhabi by all cruise lines and local operators. Excursions from each place are equally exhilarating, and different.

From Dubai, you'll see a lot of other vehicles, but there's room for everybody -- and the desert is beautiful here, the sand in ever-changing hues of red and ochre. In the desert outside Abu Dhabi, there's more of a sense of isolation as you "bash" over miles of rippling dunes. Trips from either port include a visit to a camel farm in the desert, where you can see mothers and calves and learn about camel husbandry.

You don't drive yourself on these tours -- the drivers have undergone several months of training -- but this doesn't diminish the thrills. Take your GoPro on a stick for great footage. And accept the fact that you might get stuck in a drift of sand and need a tow; it's not for the faint-hearted.

Barbecue Under the Stars

You can do daytime dune bashing, usually billed as a "Desert Safari," but cruise lines also offer a late-afternoon excursion from Dubai, bouncing across the dunes for an hour or so and ending at a desert camp where you can try camel riding and sandboarding, get a henna tattoo, smoke a shisha pipe and enjoy an extremely impressive belly dance and fire dance display.

An excellent barbecue dinner is included and there's a cash bar. Sunset in the desert is a magical experience, especially when the camels head off home over the top of a dune, silhouetted against the glowing sky.

Several of the most opulent hotels in the region offer high tea, among them Dubai's Burj Al Arab, the Emirates Palace. (You'll find tea service at Jumeirah at Etihad Towers in Abu Dhabi and the Al Bustan Palace outside Muscat, as well.) The attraction of this tour is the lavish interiors of the hotels, so over-the-top that they're tourist attractions in themselves, all splashing fountains, gleaming marble and gold fittings.

Each offering is slightly different. At the Etihad Towers, for example, tea is on the 74th floor, while at the Burj Al Arab, it's in a private room. At the Emirates Palace, you dine in the vast, chandeliered lobby. Here, you can expect tiny iced cakes adorned with gold leaf, with miniature chocolate hotel logos and the daintiest of sandwiches. Best of all is the gold cappuccino (at extra cost), a logo-ed coffee sprinkled with more gold leaf. It's not often you get to sip actual gold.

Khasab is a bleak little town, straggling inland from the tip of Oman's striking Musandam Peninsula, all rugged mountains and deep fjords. Dhows (traditional wooden fishing boats) line up at the dock, taking passengers on cruises along the longest fjord, their decks adorned with Arabian rugs and cushions for lounging.

You'll see towering limestone cliffs that plunge straight into the clear water, where locals from sleepy waterfront hamlets fish in winter (they head up to mountain pastures in the hot summer to tend their goats, when the fish retreat to cooler, deeper waters). Humpback dolphins are a common sight and often swim alongside the dhow.

There are different offerings, from fruit and soft drinks to a full barbecue lunch onboard. Most trips make a swimming stop, although occasional swarms of tiny jellyfish are a deterrent; pack a rash vest if you want to swim.

There's something exhilarating about swimming in the cool, green waters of a wadi (a seasonal river bed) in the middle of the desert. There are several combinations of wadi bashing tours from Muscat, but essentially, you drive along the coast to the fishing village of Quriyat to see the local fish market before turning inland and bumping off road (or "bashing") through palm oases and tiny villages, and along the dried-up river beds into the mountains.

If anything, it's worth doing this tour as the scenery is so beautiful and such a contrast to the flat desert and high-rises of the United Arad Emirates (UAE). Most tours stop at the deep Wadi Al Arbaeen for a picnic lunch and a swim, so pack your swimming things.

The Louvre and the Grand Mosque

These two magnificent and contrasting structures are often combined into one shore excursion from Abu Dhabi. Your first stop is the Louvre, this one open since 2018 and as breathtaking for the beauty of the building as for the art. Designed by French architect Jean Nouvel, the waterfront gallery is topped by a vast dome. Sunlight filters through as it would through the leaves of a palm grove. The art is beautifully displayed, with items grouped to tell the story of humanity in 12 chapters. It's really worth getting one of the museum guides to take you around, as there's much to learn.

The Grand Mosque follows and is as opulent as you could imagine -- a forest of slender, white marble columns, inlaid with exquisite designs, leading to the vast prayer hall, adorned by the world's biggest chandelier, throwing its sparkling light onto the world's biggest carpet. The mosque can accommodate an astonishing 40,000 worshippers. Dress code is super strict here, so take your cruise line's advice in what to wear.

Emiratis love their falcons almost as much as they love their children, and a top bird can cost roughly $396,000. Abu Dhabi's Falcon Hospital is recognized as the world leader in falcon care, and it's a fascinating visit. Some 11,000 birds are treated every year, for maintenance as much as illness.

The waiting room is an extraordinary sight: Dozens of falcons, each one sporting a leather hood to keep it calm, perching patiently in rows on benches. You can see up close as a vet anesthetizes a bird, trims its razor-sharp talons and gives it a foot massage. Visitors also get to hold a bird and even feed one a whole baby quail. There's a molting center, where birds relax during their molting season, and five-star animal boarding.

You learn a lot about falcons during the two-hour excursion -- not least that they're considered so precious that they can travel on Emirates and Etihad airlines as hand luggage.

The UAE's answer to "Jurassic Park," the island of Sir Bani Yas, has been under development since 1971, when the late Sheikh Zayed set it up as a nature reserve. In 2017, the island -- now populated with mangroves, olive trees and some 10,000 animals -- opened up as a cruise ship day resort.

Several cruise lines call here, among them MSC, Seabourn, Azamara, Costa and P&O Cruises. The safari drive, sold as a standalone shore excursion, takes about 40 minutes, whisking participants in groups of six away from the dock in Land Cruisers. All the animals are enclosed within the "park" area, although you can't see the boundary fences as the space is so big.

Guaranteed sightings include gazelle, antelope, Barbary sheep, Arabian oryx and scampering, furry rock hyrax. About 170 species of bird include peacocks, geese, ostrich and flamingos. Spotting giraffe in the middle of an Arabian island is a curious idea, but you should see them feeding from raised platforms (the animals don't go hungry here). Three cheetahs live in an inner enclosure and hunt the gazelle; there are rich pickings to be had and the cats sleep a lot, so count a sighting as a bonus.