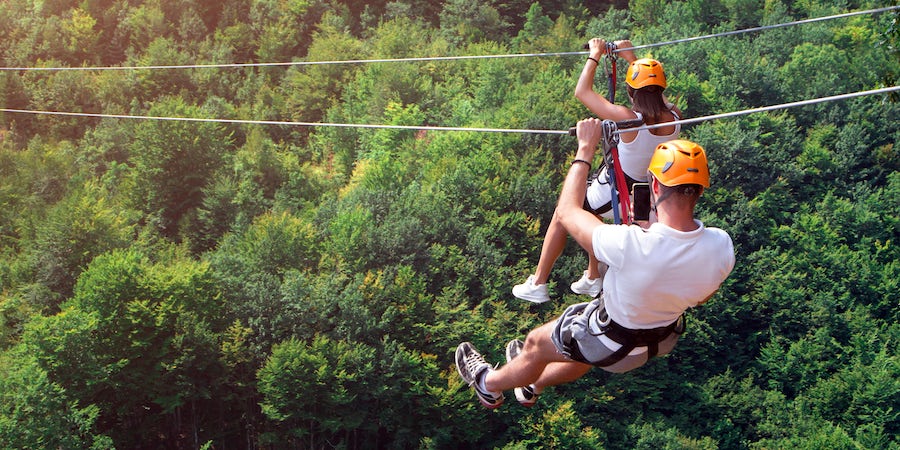 As cruise lines continue to pack ships with amazing recreational opportunities, passengers can get their fill of adrenaline-pumping action on the top deck -- including ziplining over the pool and sunbathing. As novel as ziplining on the ship may be, is that really where you're going to get your high-flying thrills?

That's why we've studied our globe and identified some of our favorite ziplining spots. Whether you want to enjoy family-friendly fun, overcome an aerial obstacle course or zoom through the forest like a flying squirrel, we've got you covered. Read on to find some of the best cruise ports for ziplining.

They call Kauai the garden island because of its lush foliage, and you can soar through the jungle with the greatest of ease, thanks to a trio of zipline courses that will give you a bird's-eye view of this tropical beauty.

At Skyline Eco Adventures, you'll have big ocean and mountain views as you make your way through one of their two courses. One of our favorite things about Skyline is that you have options if you're pressed for time. Their five-zip course takes just 90 minutes; an eight-zip course takes 2.5 hours.

Koloa Zipline has three of the longest ziplines on the island, including the half-mile-long Waita Zipline. If you've ever dreamed of flying like a superhero, a special harness lets you zip in multiple positions, including hands-free and head-first like Superman. Kids can zip alongside adults on a tandem zipline.

Many islands in the Caribbean are building ziplines and aerial parks, but none match the Flying Dutchman at Rainforest Adventures in St. Maarten. The Dutchman is the world's steepest zipline, and its 42 percent grade will likely leave your knees weak.

Located in an eco park on a historic estate, the Flying Dutchman is 2,538 feet long, drops 1,066 feet and has four ziplines so you can race your fellow zippers.

Also at Rainforest Adventures is the Souliga Sky Explorer, a four-person chairlift that follows nearly 3,000 feet of cable to the Crow's Nest at the top of Sentry Hill, the highest peak on the island at roughly 1,125 feet high. From here, the view below and of the neighboring islands is nothing short of spectacular.

In the port of Icy Strait Point, just outside the quaint village of Hoonah, Alaska, is a single zipline: the ZipRider. Why mention just one zipline? Because it's the longest one in the world.

To begin, you'll check in and take a safety and orientation class and then hop in a van for a 6-mile ride to the top of the mountain where the ZipRider awaits. Some folks might be satisfied with the ride up and the view -- the island spread out around you, the village below you and there in the distance, floating like a toy boat in a bathtub: your ship.

When it's time, you'll strap in and step to the gate. Once it drops, you're off -- sailing over a cliff and flying over the dense forest 300 feet below. The ride takes around 90 seconds and brings you from the mountaintop to the beach. We're willing to bet you don't blink, even once.

Three words: Epic. Rainforest. Views. Zipping at Adventure Park Costa Rica in the port of Puntarenas will put you in the heart of the rainforest and riding the longest zipline in the country. The park's 25 ziplines will carry you through the trees and over 11 waterfalls.

If you want to cool off, some tours offer the opportunity to go for a dip in a mountain spring-fed pool. If that's not enough ziplining thrills for you, try the zipline at Selvatura Park, the only canopy tour located entirely within the cloud forest.

What's a cloud forest? Glad you asked. Cloud forests are forests that are consistently covered in low-lying clouds, which means when you're zipping through one, you get the added thrill of flying blind, speeding through fog and mist and wispy clouds and racing to the next platform.

Want to do something a little bit weird when you zipline? Well, at Zipline Jamaica in Montego Bay, you'll combine zipping on Big Timba, a 1,600-foot-long zipline, with a fruit tasting.

No, you won't be munching on a coconut as you fly through the air, but you will stop for a breather on each platform and a tropical delight grown on the farms and in the forests nearby will be offered. It's tasty, refreshing and just strange enough to make us strap in.

Zipline Jamaica's course is short -- only five ziplines -- but it soars over a private gated farming community, giving you a taste (with the eyes and the tongue -- don't forget, there's a fruit tasting involved) of rural Jamaica. While you're there, take a stroll through its botanical gardens (fruit tasting not included).

On St. Kitts, a pair of mechanical engineering firms got their heads together to build one of the most technologically advanced zipline systems found anywhere in the world at Sky Safaris.

A series of brakes, trolleys (the thing that slides along the zipline), catch-blocks and anchors combine to make a hands-free zipline experience. All you need to do is pull your feet up and lean back in one of the most comfortable zipline harnesses around (it's based on paragliding harnesses, so it's built for all-day use).

Sky Safari's five-zipline tour goes through the rainforest and out over the Wingfield River, hitting speeds of up to 50 mph along the way. The showcase zipline takes you 250 feet above the ground and soaring more than 1,300 feet across.

A departure from all the rainforests and Caribbean isles, the zipline course at Reversing Falls in Saint John (in Canada) is nothing short of spectacular. The course has five ziplines of varying lengths and they all race down a hillside overlooking Reversing Falls. The final zip is a dual line, allowing you to race a friend over a cove beside the falls, soaring more than 100 feet above the water, depending on the tide.

So far, sounds like any other zipline, right? Well, you didn't consider Reversing Falls. Here, the Bay of Fundy and the Saint John River meet; at low tide, the river empties into the bay causing rapids and whirlpools galore. As the tide comes in, the water rises, the river current slows and then reverses at the peak of high tide when those rapids and whirlpools reform as the bay fills the river.

At Chankanaab Park in Cozumel you can make a day of the national park with tours that combine family-friendly ziplines with snorkeling, a round of laser tag in the jungle and an adventure-filled obstacle course for kids.

From the start, the Xtrem Adventure zipline circuit delivers thrills. The first tower on the largest zipline course in Cozumel stands 82 feet high and gives you views of the jungle and the Caribbean Sea. Here, you'll fly over the Chankanaab Lagoon and cross a pair of sky-high crocodile bridges on a course that ranges from four to seven ziplines and towers.