You may also like
Dismiss
Compare the 8 Most Popular Cruise Ships in the World
8 Best Luxury Cruise Experiences From British Ports
Cayamo Cruise 2023
WWE Cruise: Chris Jericho's Rock N Wrestling Rager At Sea 2023
The Rock Boat Cruise 2023
Can You Work From A Cruise Ship? Our Tips for Working Remotely at Sea
Oceania Vista: What's Coming in 2023 on the Cruise Line's Newest Ship
Did You Know You Can Cruise to the Seychelles? Here's Why You Should
Why I'll Never Cruise Without Apple AirTags Again
Maiden Voyage Blues: Why Booking A Ship's First Cruise Isn't Always Best 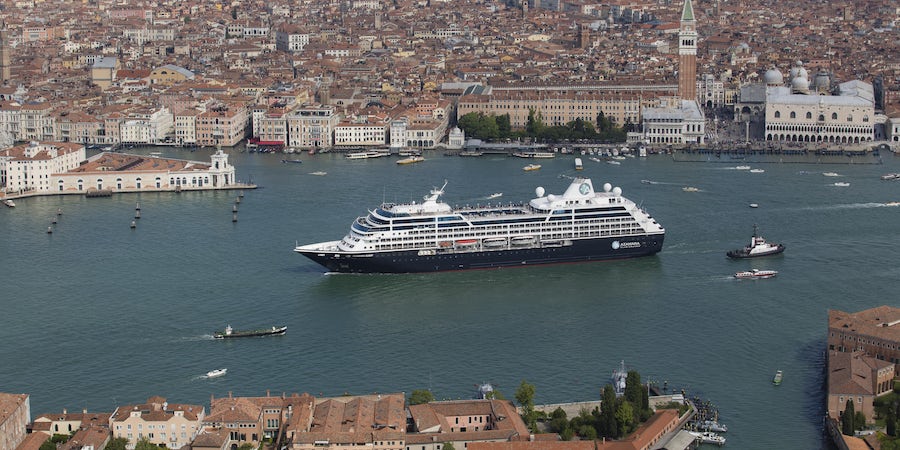 As night approached, the Turkish port of Kusadasi was backed up with cruise ships. After a hurried day of sightseeing, it was time to steam off to the next stop. But one vessel, Azamara Quest, stayed behind.

Its nearly 700 passengers, who had been asked to dress in white for the evening, were heading to the ancient Roman city of Ephesus. With the ruins closed for the day, they were the only visitors at the UNESCO World Heritage Site, where they sat down to an outdoor Mediterranean meal next to the 2,000-year-old library of Celsus.

After dinner, the group proceeded to the site’s restored amphitheater, where St. Paul once preached. Tonight, passengers would enjoy a classical concert under the stars, overlooking the sea. For Tom Baker, owner of the Cruise Center travel agency in Houston, the experience was extraordinary. “It was just brilliant. It’s one of the most amazing things they do.”

offer itineraries focused on one country

, giving passengers a chance to dive deep into a destination.

Related: Intrigued by the World's Most Exotic Destinations? Take an Expedition Cruise

What's a Country-Intensive Cruise All About?

Whatever the location, these country-intensive cruises share common traits. They’re offered on smaller vessels, which allow stops at secondary ports that can’t accommodate larger liners. And the ships stay much longer, sometimes not leaving until midnight, which lets passengers take long excursions that go far inland or to dine ashore in a local restaurant. And the cruises also include overnight port stays, letting passengers treat the ship as a floating hotel.

The approach contrasts with most major cruise lines, which have built increasingly large and elaborate vessels that become resorts at sea. These lines sell the ship as the destination and the itinerary is often an afterthought.

Related: Pictures of Southeast Asia From a Celebrity Cruise

Azamara’s CEO and president Larry Pimentel believes his company’s model makes more sense, particularly for veteran cruisers. But it also appeals to those who have avoided cruising because they weren’t interested in superficial port calls that might only allow time for a bus tour or a short shore excursion. “This is about deeper travel. It’s people connecting with people and the region and the place,” he says.

He developed the idea of intensive cruising after reading a report indicating most travelers are interested in visiting a country, not a ship or a region. His hunch has paid off. Azamara offered its first country-intensive cruises in 2017, focusing on Italy, Greece, Australia, New Zealand and Norway. In 2020, the line plans to offer 40 such itineraries across its three ships. “We’ve gone all in,” Pimentel says.

For example, Azamara’s brochures are no longer labeled as cruise guides. Instead, they’re called destination guides. Even more striking: The line is downplaying cruise staples, like casinos (on its new Azamara Pursuit, a casino was never a part of the design and it has been removed from Quest. Journey's casino will be removed soon). In their place, Azamara will create destination lounges, where passengers can attend lectures and learn more about their host country.

Pimentel says he’s particularly excited about Azamara’s new offerings in South Africa. During a 10-night cruise, passengers will spend several nights in port, visiting major cities like Cape Town and Durban and smaller calls like East London and Richards Bay. Passengers also have the option of taking a five-day safari before or after the voyage.

“Travelers want those experiences where they can really interact with the local people and gain an understanding of their lifestyle. People want to do stuff and not just hear about stuff. They don’t just want to see, they want to touch and taste it.” And more time in port makes this possible, she says.

“If you’re leaving a place like Mykonos, Greece, at 5 p.m. you’re not really seeing Mykonos,” she says. “If you’re leaving Dubrovnik, Croatia, at 6 p.m., you’re only seeing it chock-full of tourists. I’ve seen what happens after the tourists leave. It’s a whole different experience. You’re missing the local life.”

By spending a few days in port, a passenger can get to know the rhythm of a city, says Perrin, who runs a trip planning site, WendyPerrin.com. “If you’re a real traveler, that’s what you want to experience.”

Leave the Logistics to the Cruise Line

In addition, traveling by cruise ship provides options unavailable to independent travelers. Consider Azamara’s Japan trip, which circles the country, visiting 11 ports in 14 days. It would be almost impossible to cover the same territory in two weeks by land, says Michael Pawlus, the cruise line’s executive in charge of itinerary planning. But by ship it’s a natural.

And the immersion doesn’t end when passengers return to their ship, he says. “We marry the ship experience with what’s happening on shore. If it’s a French intensive, we put French wines on the ship.” There are also lectures, themed entertainment, and, of course, the line’s signature evening experiences.

Baker, the Houston travel agent so impressed by the evening experience in Turkey, says he was equally excited by his Cuba-intensive trip last fall. “I watched the response and people were enthralled.”

And he says he’s not surprised.

Related: 5 Popular Cruise Directors Share Inside Tips and Tales From the Seas

“This is the way people want to travel,” he says. “It’s no longer about getting on a ship and going to a buffet or a specialty restaurant or a casino. They want to reach out and touch the landscape, to sit down and have a beer with a local or go to a cafe. They want to see more -- and they want to do more.”