You may also like
Dismiss
5 Things to Pack for Your First Cruise
7 Cruise Excursions That Will Change Your Life
4 Underwater Alternatives to Snorkeling and Diving
MSC vs. Royal Caribbean in the Caribbean
Expert Tips for Choosing the Best Shore Excursions
How to Prepare for a Snorkel and Dive Cruise
11 Best Whale Watching Cruise Shore Excursions
8 Exhilarating Shore Excursions
10 Things You Should Never Do on a Cruise Line Private Island 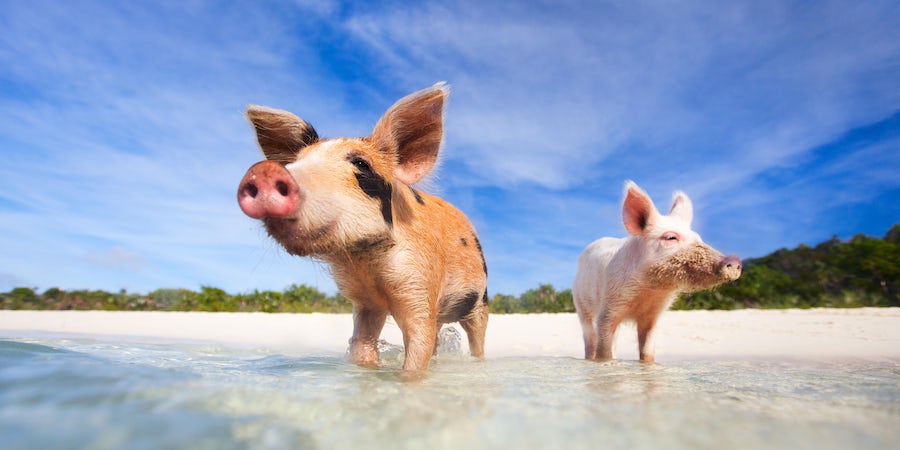 We know that pigs can't fly, but who knew that pigs swim? Cruisers heading to the Bahamas can go hog wild by getting in the water with swimming pigs on a ship-sponsored shore excursion from a private island or an independent tour from Freeport. We got our toes wet with a sounder of swine on a recent shore excursion to see if a swimming pigs tour is really worth the hype.

The most well-known swimming pigs Bahamas experience involves getting in the water with feral pigs on Pig Beach, located on an island in the Exuma district. But for cruisers, the activity almost always features trained domesticated pigs on small islands much closer to Nassau and Freeport.

Pigs have a natural affinity for the water, and when visitors discovered a colony of feral pigs living beachside on Bahamas' Exuma islands, a popular tourist attraction was born. Now, people flock to these beaches to see and feed the pigs.

Related: The Bahamas As You've Never Seen It, From A Luxury Crystal Cruise

But getting to Exuma is not easy, and the feral pigs have been known to bite. Additionally, there's concern that tourists are hurting the feral population, which in 2017 lost seven pigs to unknown causes. As a result, several Nassau and Grand Bahama Island-area operators have created their own, tamer versions of the activity using domesticated pigs.

During these shore excursions, cruisers get into the water with the pigs, feed them apples and scratch their backs and tummies. The pigs are friendly and eager to get a piece of fruit. But, to be clear, the experience centers on the pigs doing all the swimming. You don't actually swim with pigs.

We visited the swimming pigs of Treasure Island on an excursion purchased through Norwegian Cruise Line. The tiny island is a 10-minute speedboat ride away from Norwegian's private island, Great Stirrup Cay. The same excursion can be booked through Royal Caribbean for cruisers stopping at that line's private island, CocoCay.

After the hair-whipping ride over to the island on a 15-person speedboat, we arrived at the tiny Treasure Island. We could see the previous group of cruisers in the water with the pigs in an enclosed section of beach.

Before we could get our feet wet, we were taken up to a patio with tables and chairs and given a quick lesson on interacting with the animals: Don't tug on their ears or tails. They love their stomachs to be scratched. Never feed them with your hand, always use the wooden skewers. Hold the skewers to the side and away from your body. Please don't poke the pigs with the skewers.

The most disappointing instruction? No cameras permitted. Fortunately, one of us decided he wasn't interested in getting in the water and was able to take pictures from the patio. Unfortunately, the distance between the two was great enough that a cellphone camera was going to be hard-pressed to take good photos.

Ten minutes later, the group in the water was ushered out, and we made our way onto the small beach and into the ocean with about 10 pigs of varying sizes, though the smallest was still the size of a fat Rottweiler.

Related: Whale Watching and Other Natural Shore Excursions in the Mexican Riviera: Just Back From Majestic Princess

It quickly became apparent that the pigs are most interested in the apples. We tried scratching a stomach or two, but as soon as the pig realizes there's no food, it moves on to the next person. A staff member handed us a skewer and two apple pieces, and even as we put an apple onto the skewer a pig spotted the juicy morsel and quickly swam over. (The water wasn't more than stomach-high on most adult cruisers, but deep enough that the pigs often need to swim.)

The group spent the next 20 minutes or so feeding pigs as they swam from person to person. There was much laughter and squealing (from the younger cruisers, not the pigs), and lots of bacon walking jokes.

It's hard not to smile at swimming pigs, but the lack of any interaction beyond the feeding was somewhat disappointing. None of the pigs seemed interested in being scratched, and the pigs that had enough to eat headed to the beach to lounge and didn't want to be approached.

We were out of the water and back on the patio well before it was time to go.

If you love pigs, then this excursion is worth it; just don't hope for something more than simply feeding them. There is no actual swimming with the pigs involved. No snorkeling. You won't even get your hair wet unless you purposely dunk yourself into the waist-high water.

We enjoyed the shore excursion overall despite some of the disappointments, but found the price (nearly $100) too high for what the actual experience was. Half the price would have been a much more acceptable amount.

Cruise Critic makes no endorsements, representations or warranties with respect to the products, organizations or websites referenced in the above article, nor is any warranty created or extended by providing such information, and Cruise Critic shall not be liable for any damages arising therefrom. The advice and strategies contained herein may not be suitable for every situation.