You may also like
Dismiss
Getting to Your Cruise: A Guide to Train Travel to Southampton Cruise Port
Celebrity Cruises History
5 Mind-Blowing New Cruise Attractions of 2018
8 Things You'll Love About Celebrity Edge
Solstice Class vs. Edge Class on Celebrity Cruises
Behind the Scenes Photos: Celebrity Edge, Before and After
8 Reasons to Cruise on a Refurbished Ship
Pictures of Carnival Panorama
23 Things Cruisers Love to Complain About 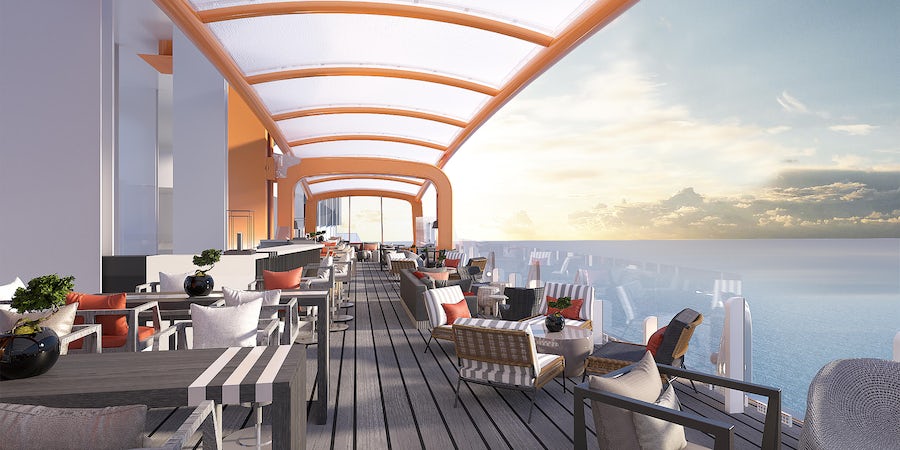 True innovations in the cruise industry are rare, but the Magic Carpet is most definitely something never before seen at sea. A tennis court-sized cruise ship deck that juts out over the edge of the ship, the multipurpose Magic Carpet can be raised and lowered and used in any number of ways -- from a tender platform at sea level to a party space high up in the air.

Though it looks like a massive, bright orange elevator, the Magic Carpet is not something cruisers can ride from one level of the ship to another. Instead, it's a 90-ton piece of moveable deck that can be used in different spots on the ship for different purposes at different times of the day.

Originally imagined specifically as a platform for getting onto and off tenders, the Magic Carpet concept expanded to include four functionalities.

When stationed on Deck 2, the Magic Carpet serves as a water-level throughway for passengers to easily board and disembark the tender boats needed at ports where Celebrity Edge is unable to dock. Cruisers can simply walk through the Magic Carpet and into a tender without the need for ramps or stairs.

When not needed for tendering, the Magic Carpet can be stationed on Deck 5, Deck 14 or Deck 16.

On Deck 5, the Magic Carpet will be used as an alfresco extension of the extra-fee raw bar, Raw on 5, with room for up to 100 diners.

Later in the day, when stationed on Deck 14, its sophisticated bar and seating options will shine as it serves as a location for happy hours and late-night parties.

At select times, the Magic Carpet will be situated at its highest point (Deck 16) and used alternatively for exclusive dinners or high teas. (Acrophobes need not worry, the floor of the Magic Carpet is not transparent, so you can't see the sea far below you.)

Stepping onto the Magic Carpet itself does not carry a cost, but activities taking place on it might carry a fee. For instance, when it's used as a sushi restaurant on Deck 5, passengers will pay a la carte for the food they order; when it's a themed dinner spot on Deck 16, there will be a cover charge to gain entrance. Alternatively, when the Magic Carpet is being used as a tender platform on Deck 2, there will be no price associated with the venue.

Magic Carpet will only be found on Celebrity's Edge-class ships. It will make its debut on Celebrity Edge in December 2018 and then return on Celebrity Apex when it launches in spring 2020.