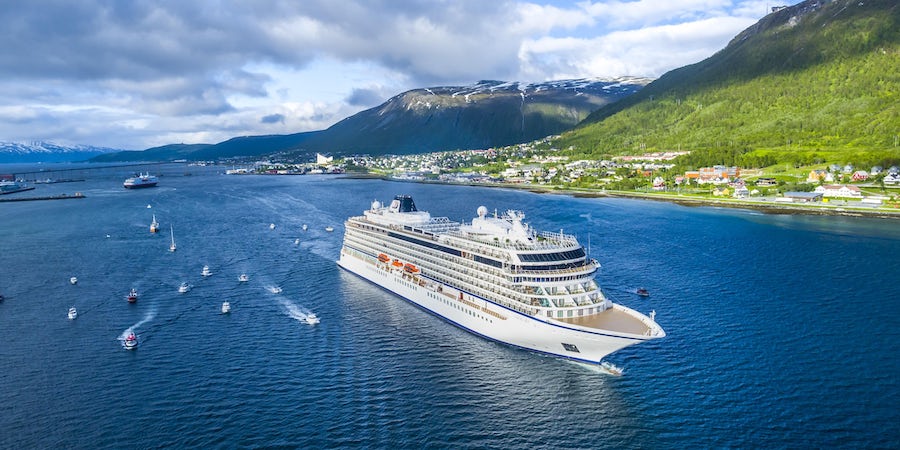 Exotic Norway: Why a Cruise Is the Best Way to Travel

What makes a cruise the best way to see Norway’s most compelling ports of call? It’s the most seamless, most comfortable, and even most cost efficient way to cross one of the world’s most geographically dynamic countries. Instead of taking a series of planes, trains, automobiles and even ferries along its rugged coastline, deep valley gorges and mountainous terrain, the idea of seeing Norway by ship and without packing and unpacking, is a compelling one.

On our cruise aboard Viking Ocean’s Viking Sea, our “Into the Midnight Sun” itinerary visited some of Norway’s better-known destinations. But what really caught my eye, both in planning the trip and then again in experiencing it, was the smaller, more remote and off-beat places that the ship also visits.

Each charming town along the glorious fjord-laden coastline enchanted and surprised in its own way. This signature sailing was extra special since Viking -- which specializes in offering elegant accommodations, fine dining and complimentary excursions in each port -- has deep Norwegian roots and prides itself on showing off the homeland.

Beyond the metropolises of Oslo and Bergen, there are “hidden gem” ports that reveal the natural and historic wonders of this Nordic destination. We’re talking about tumbling waterfalls, glistening glaciers, Viking-era hamlets, eccentric legends of trolls, gourmet cuisine (often based on smoked salmon, herring and reindeer) and even aquamarine beaches that could be postcard images from the tropics. I found that it’s not all northern lights and fjords when it comes to Norway.

Here are six of the country’s unique ports that are worth a visit.

Geiranger By Air, Sea and Land

This is the gateway to the UNESCO World Heritage Site of Geirangerfjord, which stretches nearly10 miles from the Atlantic Ocean inland, and it’s the ideal spot to see some magnificent Norwegian fjords. Two must-visit spots beyond the fjords themselves are the 1,000-foot-tall Seven Sisters Waterfall (where seven streams meet and comprise a gushing aquatic spectacle) and the opposing Suitor waterfall and Eagle Bend overlook, where there's a dramatic, bird’s-eye view of the fjords. As you navigate the road to the top -- including 11 jaw-dropping hairpin turns -- it becomes clear that the staggering, vertical cliffs and majestic flows of water below are worth the harrowing, yet spectacular, drive.

There is no better way to see the area than by helicopter, though I discovered it would cost a small fortune for the privilege. For another perspective, jet boat tours (ideal for photographers) or kayak excursions along the fjords at the base of the mountains get you up close and personal with some of the crashing waterfalls and craggy cliffs. Hardly the adventurous type, I appreciated the variety of things to keep me busy on land. A visit to the Norwegian Fjord Centre provided the perfect context to understanding this mountainous region, which peaks at the 8,000-ft. tall Dalsnibba mountain that towers over the shimmering waters below.

Other in-demand excursions are the RIB (rigid-hulled inflatable boat that travel at fast speeds) tours through the fjords (definitely for those with an adventurous spirit), or hiking along the hilltops to see them from above. Both are fairly physical experiences with views offering differing perspectives of this natural wonder.

This bucolic coastal enclave is known as the “town of roses,” hidden within shelter islands that preserve its rather pristine environment. Relying on the timber industry, it is no surprise that colorful log houses welcome visitors amid this impressive landscape. Vibrant gardens complement this seafront fishing town’s snow-covered mountain backdrop. Historians love Molde for its Viking heritage with churches and historic buildings dotting the roads around town. I loved it for the endless Instagram-worthy photo opportunities.

Related: Which River Should You Cruise? Pick By Interest

This is where the highest vertical mountain in Europe is found, Trollveggen, and it’s a popular spot among adventurists. It’s also the starting point of the Atlantic Road, a national tourist route, where travelers can follow the rugged coastline to find tiny Viking fishing villages scattered across waterfall-laden mountains. Islands are interconnected by narrow, dramatic roads and a series of twisting, curvaceous bridges that stretch nearly 5 miles along this rugged coastline. While it’s fun to explore via motor coach, the most adventurous of tourists will rent a car to venture out on their own. As one local told me: this road is a favorite of local joggers thanks to its never-ending scenery.

If time is of the essence, be sure to visit Molde Cathedral and snap a photo of its bell tower and beautiful rose gardens. The folk-style Romsdal Museum on the edge of town is great for history buffs and those interested in the region’s historical architecture, but Instagram fans will have better luck making their way down the Atlantic Road to snap shots of old churches, jagged shorelines and the occasional line of fish hung out to dry.

Among the most enchanting excursions in summer is the Mardalsfossen waterfall, among the highest free-falling waterfalls on the planet (and the tallest in Northern Europe at more than 2,000 feet). Or, book a kayaking journey through Moldefjord. It seemed like it took me forever to pick my jaw up from the floor when I saw Mardalsfossen for the first time.

As the biggest city north of Trondheim (and certainly among the top three within the Arctic Circle), Tromso is close to the top of the country – and well within the Arctic Circle. Its eclectic architecture will surprise travelers that have spent days seeing historic Viking and Nordic towns. It has a mix of neoclassical and modernist buildings that may serve as the last welcome to 21st-century life before continuing further north toward Nordkapp.

It has been said that Tromso’s Arctic Cathedral, a white parish church, bears a passing resemblance to Sydney’s Opera House. Perhaps from far away one can make that reference. However, from a closer perspective, this jagged architectural structure deserves props of its own. Its all-white roof zigs and zags with enough oomph that it calls attention from downtown (across the water) where most shops, hotels and restaurants are located. Stroll through town but also save time for The Polar Museum, which explains much of what travelers will see as they venture even further to the top of the Earth. I could have spent hours here if I did not have beer on my mind.

That's because Norway's oldest pub, Mack’s Brewery, is in town. I came here to sample what would become one of my favorite beers of the trip, the Mack Midnattsol, with its hoppy and citrusy flavors. My fellow travelers raved about their experience at the Tromso Wilderness Centre, where more than 300 husky dogs will race to find a place in your heart. Yes, these are the dogs that pull sleds in the winter but during the warmer months, they still need attention and training. Trek through the forest with them, but be careful because you might just fall in love and miss your ship.

On Top of the World in Honningsvag

Expect little, but prepare to be rewarded with a lot if the weather is just right. This Barents Sea fishing village maintains a strong Sami culture (common within the Arctic Circle, especially in Northern Finland) at the tippy top of Norway. Almost all cruise passengers will take the driving excursion to the North Cape (Nordkapp) along a scraggy, narrow road of barren landscape punctuated by small Sami villages, which culminates at one of the northernmost points in Continental Europe. Here, visitors will see firsthand (at least on a clear day) where the Barents and Norwegian seas meet. Everyone snaps photos from this famous landmark. Don’t expect to see much wildlife though unless you venture far from the main road (although the occasional reindeer makes an appearance at the Sami tourist stops set up to sell souvenirs).

Spend time exploring the impressive visitor’s center that sheds light on how and why the midnight sun exists. It is a must-see part of any journey to truly understand one’s position at the “top of the Earth.” The only thing better would be to fork over the cash to see it from a helicopter, but beware that these tours can easily cancel due to weather (alas, that happened to me). One day, the views from the vantage point are spectacular; the next, there’s nothing but wind, rain and fog.

Seafood lovers should take an excursion via deep-sea raft to catch king crab, which can later be prepared Norwegian-style. These tours are not for the faint of heart and require donning float suits, but even vegetarians like me will find excitement in the surrounding landscape if they can stomach the high seas.

Alesund is a charmer with its fairy-tale architecture at the entrance to the famous fjord passageway. I learned that the buildings were designed by architects that had lived abroad and used their international design experience when rebuilding the purpose-built town from scratch following a devastating fire in 1904. Today, visitors stroll through the cobblestone streets to find a mix of Viking accents on colorful art nouveau buildings, which face the boat-lined bay.

Following a recommendation from one of the ship’s staff, I paid a visit to the Alnes Lighthouse on a neighboring island to enjoy views of the bay while noshing on the famous lighthouse spongecake, a recipe passed down for generations from the lighthouse’s owner. Afterward, the Art Nouveau Centre and the Art Museum KUBE offered insight into the region’s creative spirit.

We also partook in a shore excursion to Trollstigen, land of the trolls. The group followed a scenic and winding road that reached as high as 5,000 feet above sea level through the mountains and then witnessed breathtaking waterfalls and dramatic views from a new vantage point. While I did not have the energy to stroll the hiking paths that follow the same route, the view from the bus was just as illuminating.

Most ships will dock in Leknes, one of the villages lining Norway’s Lofoten Islands, known for its picturesque Norse settlements and sparkling bays. On sunny days, friends at home might mistake your photos for a Caribbean island thanks to the bright blue water surrounding the islands. While the sea may be cold, the sandy beaches along the shorelines here are charming spots to relax (if not explore via horseback). I hiked a small hill by the bay to enjoy the colorful panorama and crisp, fresh air.

Many visitors make their way to Nusfjord to explore the well-preserved fishing village that showcases historic Viking culture through medieval Scandinavian architecture. It’s here where you’ll see traditional longships and maybe even reindeer.

There is no shortage of things to see and do along the Norwegian coastline and this highlight-packed itinerary barely scratches the surface. One thing is clear: Norway’s coastline deserves more than a single visit to truly enjoy what it has to offer. I intend to return soon, and often!

**Intrigued by cruises in Northern Europe and Scandinavia? Read more on Cruise Critic:

In Search of Norway's Midnight Sun: Join Us on Viking Sea

Rock Star Ports of Northern Europe: Where to Visit from Bergen to Berlin

Exotic Norway: Why a Cruise Is the Best Way to Travel

Ramsey Qubein travels the globe flying more than 450,000 miles a year on his quest to visit every country in the world (166 and counting). Following stints living in Madrid and Paris, he calls North Carolina home although you're more likely to find him on a plane, hotel, or cruise ship these days. While not his first time visiting the Arctic Circle, his recent Viking Sky sailing was his first "midnight sun" sighting. His work has appeared in numerous publications including USA Today, AFAR, Reader's Digest, Business Traveler, Travel Age West, AAA, and Fortune among others.