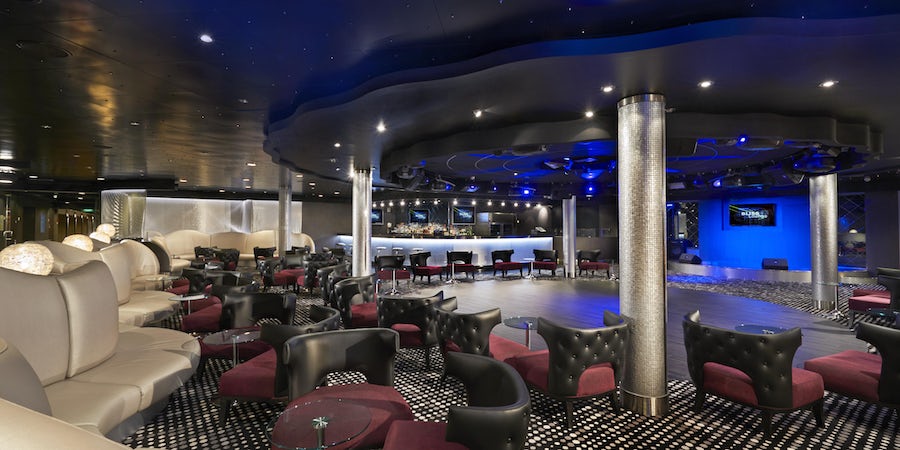 Bliss Ultra Lounge is a large multifunctional venue that doubles as an activity space during the day and a hip and happening dance club at night. On select ships, Bliss even comes complete with a bowling alley, on others it does not. A sophisticated, swanky lounge, Bliss is definitely the place to be when you're craving a nightclub atmosphere onboard.

Walk through Bliss during the day and you might find a balloon-twisting family activity or a TV gameshow taking place in the otherwise quiet space. Or perhaps you'll hear the sounds of a bowling ball striking pins as a group of friends challenge each other.

When the sun goes down, however, Bliss quickly transforms into a nightclub-style atmosphere complete with a cool bar (or several), comfy lounge seating and more and more people on the dancefloor as the night goes on. (It's usually adults-only after 11 p.m.)

On the ships with a purpose-built Bliss Ultra Lounge, it's a huge space made up of cozy nooks with sofas, chairs and even beds, which make for a homey atmosphere combined with lots of funky furniture, high-tech lighting effects and eclectic fixtures to admire. Several of these lounges feature a bowling alley to boot. On older ships that received the lounge during refurbishments (Norwegian Sun and Star, specifically), the space is much smaller, but just as chic.

Bliss Ultra Lounge is also the place that you'll often find one of the hottest parties at sea -- the White Hot Party, Norwegian's signature dance party that happens once each cruise. (Don't forget to pack your best white outfit!) Regardless of the night's party or event, the dancing continues until "closing."

There is no cover charge and drinks are priced a la carte.

Bliss Ultra Lounge can be found on the following ships: