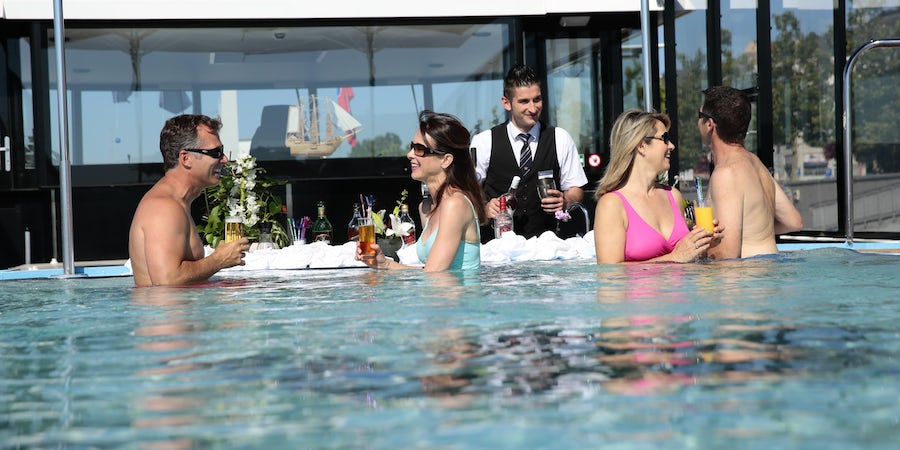 Once upon a time, river cruises presented a very basic way to travel in Europe.

As recently as the mid-1990s, the few ships cruising the Rhine were functional rather than elegant. The crew spoke little English, even during the single rudimentary shore excursion offered in each port. Cabins didn't just lack balconies -- the bathrooms were minuscule, the showers had clingy curtains. Dining was a meat-and-potatoes dirge, and greens were used strictly for ornamentation.

"I went on a Viking cruise on the Danube back then," recalls Sue Bryant, cruise editor for The Sunday Times, who says the quality of the ships was completely different from what we know today. "The cabins were so much more basic, with pull-down bunk beds and nothing more than a porthole for the scenery."

Nowadays, river cruise ships might be outfitted with multiple dining rooms serving healthful, contemporary cuisine. Most cabins have a French balcony and many have walkout balconies (some have both). Bathrooms are marble clad, and suites have bathtubs. Today, not only is there a choice of shore excursions, but some lines avail a fleet of bicycles for riding independently or on a guided tour. The better ships have gyms, a salon and massage services, swim-up pool bars and convivial spaces for socializing.

Yes, the river cruise vacation has come a long way.

How Did We Get Here? 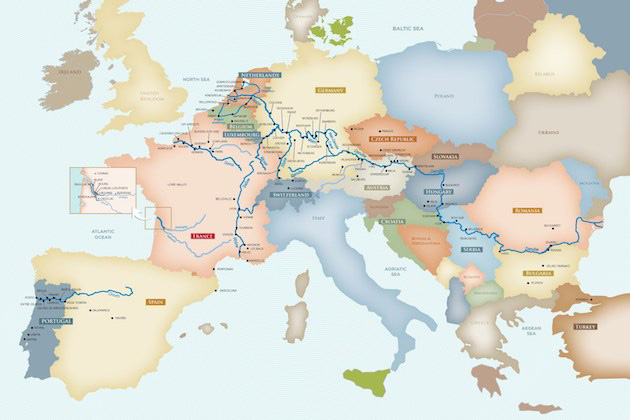 It's not hard to assume, as I did, that oceangoing ships cruising the world today are a distant biproduct of Europe's river cruise ships. After all, in the late 19th century, well before the concept of an ocean cruise as a vacation took hold, Thomas Cook operated tours in Egypt aboard river cruisers as an efficient, relaxing way of seeing the tombs and treasures along the Nile River.

But, for most of the 20th century, such cruises on the Nile were the exception, not the rule. With the arrival of the fun ships and love boats of the 1970s and 1980s, the ocean cruise vacation found its own trajectory.

Even in the early 1990s there was very little cruising on the rivers of Europe, nor in other parts of the world. Demand for river cruises -- especially from U.S. travelers -- did not yet exist.

"Europe's waterways were limited," says Bryant. "You couldn't do the Grand Europe cruise, you couldn't cruise Eastern Europe because of the war. There was nothing like the Mekong River, the Irrawaddy or the Ganges available for river cruises."

It was a single, massive construction project in 1992 that opened the floodgates for Europe's river cruise industry to be born.

Ironically, the 106-mile Rhine–Main–Danube Canal was never conceived of as a touristic endeavor. The project was designed to connect the Danube and Rhine river basins, allowing for freight shipping and commerce between the North Sea and ports in Northern Europe all the way down to the Black Sea.

When it opened in 1992, the canal launched a new world for shipping and freight, carving an artery through the middle of the European continent. Sixteen locks would lift river ships to 1,332 feet above sea level across Europe's continental divide, creating a 2,175-mile-long waterway to navigate through 15 countries.

In the early 1990s, as vice president of product development for motor coach tour operator Uniworld, Rudi Schreiner faced a problem. With the dissolution of the former USSR, countries like Yugoslavia that Uniworld sold as part of package tours began to fall apart. But with the opening of the Rhine–Main–Danube Canal, Schreiner saw the potential for leisure travel. Concurrently, as conflicts in Eastern Europe began to ease, interest in touring the countries of the former Eastern Bloc emerged.

Schreiner proposed creating the first leisure cruises to go through the Rhine–Main–Danube Canal. Uniworld then chartered the Blue Danube, the first ship outfitted with hotel-style beds.

"The initial market was older, experienced travelers," says Schreiner, who went on to found AmaWaterways in 2002 and serves as its president today. "They'd done plenty of things but they wanted to try something new. Initially, our No. 1 selling itinerary was the 14-night Amsterdam to Budapest."

It wasn't hard to see the appeal of river cruises. Prior to the canal's opening, a European cruise meant sea travel, docking at working ports often located miles from the city. But river cruise docks were usually in the center of inland cities. And, although they were packaged like European coach tours, river cruises were more of a hybrid of the ocean cruise and a land tour. Notably, guests did not need to pack up and switch hotels each day.

At the start, dinner was a set menu and guests were expected to choose their entree the day prior, so the chef would know what to prepare, Schreiner says. "The food was very Germanic or Dutch -- a piece of steak with some potatoes and then a green leaf on top to make it look appealing. So the first thing we did was to upgrade the food -- the food changed a lot during my first couple of years at Uniworld."

Uniworld went from carrying 100 passengers in 1994 to 18,000 guests by 2000. To meet the growing demand, Schreiner developed itineraries that canvassed all of the major European rivers, including the Elbe, Douro and Po.

The River Cruise Comes of Age

In 2000, just two years before he would launch AmaWaterways, Schreiner moved on from Uniworld to join Viking Cruises as its CEO, where he focused on packaging the river cruise vacation for North Americans.

"Rudi had a vision that he could bring North Americans to Europe and travel in a comfortable way, visiting the major cities like Budapest and Vienna," explains Douglas Ward, author of "Berlitz: River Cruising in Europe," and other cruise guidebooks. "Viking Cruises had a product that nobody else was doing at the time, and almost no other operators were packaging things like flights and transfers -- he did it extraordinarily well. But in the beginning, Viking chartered various vessels from several different owners, so there was inconsistency. Rudi was very instrumental in trying to make the Viking product consistent from one ship to the next."

By the early 2000s, other changes were afoot in the industry, as increasing competition sparked new milestones. Whereas river ship cabins originally had only fixed windows or portholes that could not open, French balconies became standard by 2003. 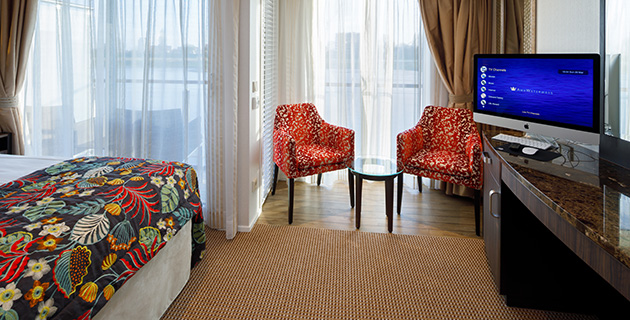 After two years with Viking, Schreiner joined Jimmy Murphy and Kristin Karst to found AmaWaterways, dedicated to the English-speaking market, and in 2006 the line debuted its first ship, AmaDagio.

Related: River Cruising Aboard AmaWaterways' AmaLucia: Why 2022 Could Be The Best Year to Sail the Rivers

Through it all, Schreiner's attention to cuisine has helped raise the bar throughout the industry. AmaWaterways was one of the first to introduce "alternative" dining rooms. The Chef's Table is an open-kitchen venue that offers a gastronomic tasting menu in an intimate, refined setting, and features wines plucked from the regions traveled on each itinerary.

"Rudi has highlighted the fact that people, particularly from California, are much more aware of food and wine," Ward says. He went to the right people to supply the right product, and he spends significantly more on food and wine than his competitors, especially compared to the low-priced operators who provide very basic food and very little choice. It's one reason his ships score really well for me." 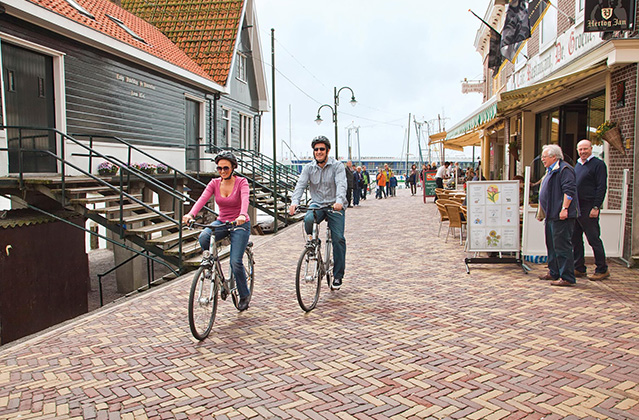 AmaWaterways has also pushed to create a river cruise product that appeals to younger, more active travelers. When AmaDagio was built, Schreiner wanted 50 bicycles onboard, for guests to use at their leisure for exploring the areas surrounding the ports.

"Everyone thought I was crazy, but now we have bikes onboard every ship," says Schreiner. AmaWaterways has since developed a successful relationship with Backroads, the bike touring company, which brings groups of 30 on select itineraries, plus guides for cycling trips each day. More to the point, the industry's taken notice and other lines, like Uniworld, Crystal and Scenic, are incorporating bicycles into the core of their shore excursion programs, though none to Ama's level.

Traditional river cruise demographics, long centered around older, more experienced travelers, are now changing with the advent of family travel. A partnership with Adventures by Disney has allowed the "Mouse House" to charter ships from AmaWaterways, for family-friendly river cruises -- and multigenerational family groups, as well, are common on summer sailings.

"We were not focused on the family audience, they came to us," adds Schreiner. "With this partnership we have started building ships with connecting cabins, plus we have ships with triple cabins, and quads in the suites."

The industry's newest evolution is the embrace of wellness travel and that, too, has been pioneered by AmaWaterways. In 2017, a multi-layered wellness program was introduced on AmaLyra. Featuring morning sessions focused on yoga, balance, cardio and core training, the program was popular enough that wellness instructors were brought onto six ships the following year, and will be available fleetwide in 2019.

What else do you want to know about river cruises in Europe? Check out these other stories...

A native of San Diego, David Swanson has been awed by Alaska on more than 10 separate trips, including land-based journeys, one of which ventured north of the Arctic Circle. His writing and photography has been featured in the pages of National Geographic Traveler, American Way, and the Los Angeles Times for more than 20 years, and he has served on the Board of Directors for the Society of American Travel Writers since 2009.