You may also like
Dismiss
Seattle vs. Vancouver: Where Should You Start Your Alaska Cruise?
7 Things You Can Only Do on Carnival Vista
Tasting the Sourtoe Cocktail in Dawson City, Yukon, on an Alaska Cruisetour
Flying to Your Cruise: A Guide to Long-Haul Airports, Airlines and Flights
Coastal Cruise Tips
The World's Best Beaches to Visit on a Cruise
8 Exhilarating Shore Excursions
Most Amazing Cruise Sunset Photos
Your Favorite Cruise Ship is For Sale? Here's Why You Shouldn't Panic

Cruise with Us to Alaska

Alaska: It's home to majestic mountain peaks, calving glaciers and exotic wildlife as well as a culturally rich history that began with the settling of Alaskan Natives. Then there was the Klondike Gold Rush and, today, port towns -- large and small -- are attracting new waves of settlers. This time, they're naturalists, adventurers, entrepreneurs and artisans. If you haven't cruised Alaska yet, it's time.

In this day-by-day report from an Alaska cruise, we invite you to come along with us as we share our seven best reasons (one for each day in port) and then some about why this is a trip you must take. We sailed aboard Princess Cruises' Star Princess, on its seven-night "Voyage of the Glaciers" itinerary. What's unique about this cruise is that you get to see the Inside Passage's trio of marquee ports, Skagway, Ketchikan and Juneau, and you also get two days of glacier spotting --both at Glacier Bay and at College Fjord -- along with a trip through Prince William Sound. We started out from Vancouver and our cruise disembarked in Whittier, a port city that serves Anchorage (this itinerary is also offered in the reverse direction). Join us! 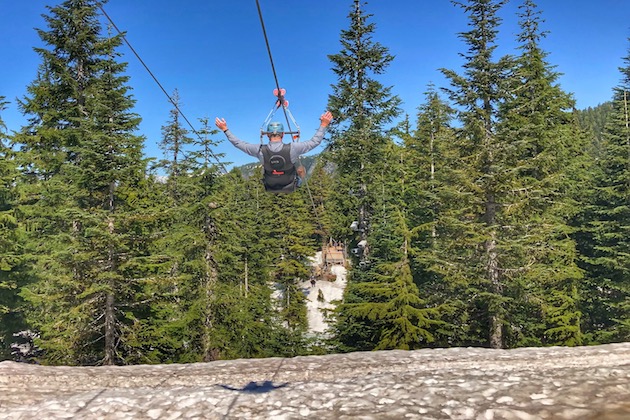 Vancouver, on Canada's northwest coast, is one of cruising's most beguiling port cities, and it's a popular turnaround place for Alaska-bound cruises. What makes Vancouver unique? It's one of the world's most cosmopolitan cities and yet it's surrounded on three sides by the Pacific Ocean, the Strait of Georgia and numerous bays and rivers, and, on the other, by the 5,000-foot Coast Mountains.

Since we were boarding our ship here, we made plans to spend a few extra days in Vancouver. In Cruise Critic's own Vancouver port profile, we provide a comprehensive rundown on what to do in the city, and we'd previously done pretty much everything.

This time, we tried something entirely new: a visit to Grouse Mountain, a ski resort in winter, and, increasingly, a popular get-out-of-the-city refuge in spring, summer and fall. We hopped on a free shuttle bus from Canada Place (same place where ships dock) and journeyed across the Lions Gate Bridge (a sister to San Francisco's Golden Gate). After a 20-minute ride, we arrived at the base of the 4,300-foot-high Grouse Mountain, where a massive twin system gondola whisks you to the top.

Think of Grouse Mountain as a wilderness park, with extras. There's a grizzly bear habitat. You can go on guided eco hikes, ride a zipline across mountains and canyons, and take in a lumberjack show. Hungry or thirsty? There's a huge lodge, with casual dining, a coffee bar and a top-rated restaurant (with fireplace if you're sitting indoors and alfresco views and fresh air if you're on the patio). 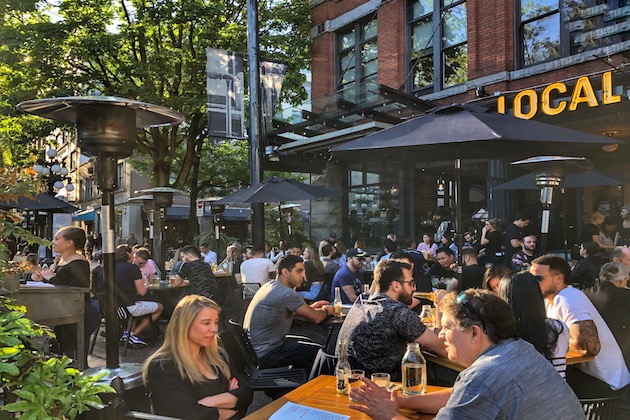 Tonight, back in Vancouver, we spent the evening in quite the opposite fashion, wandering around Gastown, an urban neighbourhood just blocks from our hotel at Canada Place. For tourists, it's best known for its working steam clock, one of the only ones in the world. For locals, its abundant selection of cafes and restaurants makes it one of the most convivial places in the city. On a sunny evening, we landed a great patio perch at The Local, and felt, at least a little bit, as if we experienced the best of what the city of Vancouver has to offer: urban and wild, all in one day. 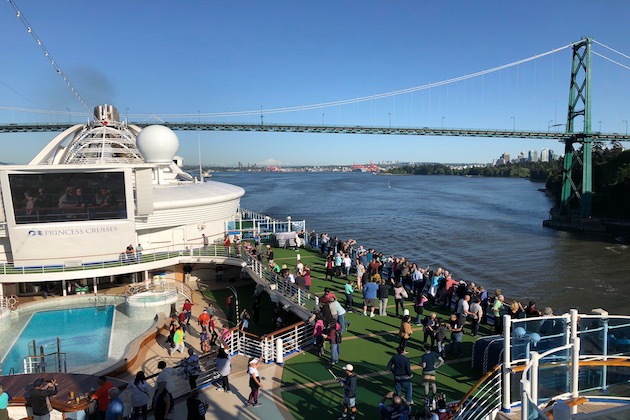 Once we boarded Star Princess on Saturday, there was this feeling of shucking off all travel pressures. At a hotel, you're always thinking about next steps: How do we fill the day? How do we get around? Where will we go to eat? On a cruise -- and this is why, after 20 years of travelling via cruise ships, I still love it so much -- when you get onboard, you get to relax. It's up to the cruise ship to transport us to ports of call. We can choose from the ship's menu of shore excursions, with all logistics handled. There's a range of restaurants, bars and live entertainment. And seven nights in one place means we can actually unpack and create a home-away-from-home ambience in our stateroom.

At tonight's sail-away, the sun shines brightly and we're all celebrating at the pool deck, waving goodbye to the Oz that is Vancouver. Having been lucky enough to cruise north from Vancouver before, I can't help but appreciate that as beautiful as it has been, this is just the start. It gets even better from here.

When the captain pops onto the intercom to tell us that a great example of a morgana effect -- essentially when two mountains appear to be sitting on top of themselves in inverted positions -- can be spotted off the starboard side of Star Princess, you get the sense this trip to Alaska is anything but an ordinary cruise. Plus, it's definitely a busy, port-intensive itinerary. Just about every day we'll either be in port or in bays of glaciers, and so to start off with a day at sea is a welcome bit of scheduling. After the bustle of the past few days of travelling, it's nice to have a bit of downtime.

Or do we? On our first day it's clear how much our destination, primarily Alaska, is incorporated into the cruise experience. It's not just that the entertainment staff wears the red-and-black flannel checked shirts of Alaska's storied lumberjacks or that Alaskan microbrews are on offer, but also that the North to Alaska component spreads throughout so many onboard aspects. In addition to all of the traditional activities that are offered onboard Princess ships, there's a presentation by the on-ship naturalist on creatures, like sea lions, Pacific white-sided dolphins and beluga whales, who live in the waters beneath us. Today's arts and crafts project: creating Klondike bracelets. Who knew that the harmonica is a component of traditional Alaskan music? The music aficionados among us got to take a lesson.

And yet, if you really just want to relax, sleep-in, read a good book on the balcony as we pass awe-inspiring snow-covered mountains on the coast or play mah-jongg, you've got those options, too.

Related: Whale Watching and Other Natural Shore Excursions in the Mexican Riviera: Just Back From Majestic Princess