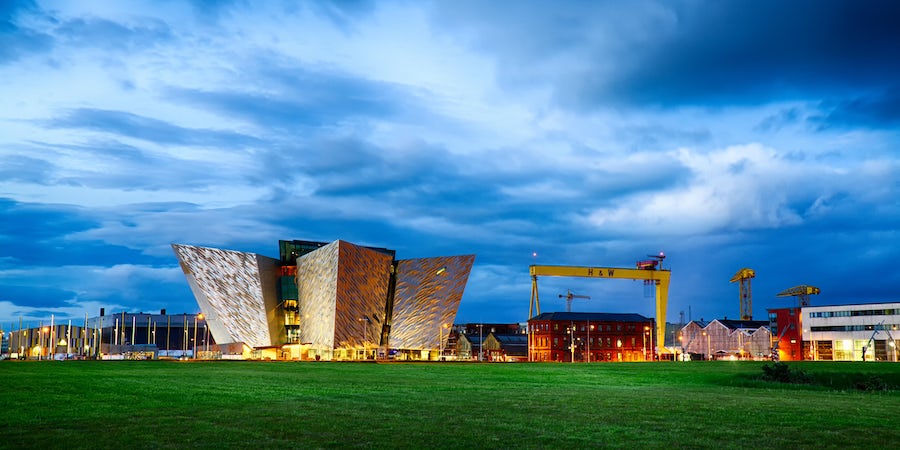 Visiting the Titanic Belfast Museum on a Cruise

The last thing anyone wants to think about while on a cruise is the sinking of a ship, but if your voyage includes a call on Belfast in Northern Ireland, you won't want to miss a visit to the capital city's Titanic Belfast, an interactive museum complex and visitor's center dedicated to the ill-fated ocean liner built there.

Shipbuilding is in Belfast's DNA, and Titanic Belfast is fittingly positioned on Queens Road, next to the Harland and Wolff shipyard -- the same one that constructed Titanic from the ground up in the early 1900s, along with sister ships Olympic and Britannic. (Although it now focuses more on ship repair and structural engineering than shipbuilding, Harland and Wolff is still operational.)

Related: Titanic 2: Everything You Need to Know

Near the shipyard's two giant yellow cranes, travelers will find a modern glass building with four hull-like structures emerging from it, covered in silvery, scaly aluminum sheets. Inside is the city's Titanic museum, known as the Titanic Experience, which features six floors of history, including what went into building a ship of Titanic's size and what life and industry were like in Belfast more than 100 years ago.

Related: Titanic Memorials and Historic Sites You Can Cruise To

Memorabilia -- vintage posters, newspaper articles, tickets and letters from passengers to their families back home -- can be found around every turn, bringing to life the hype and fanfare surrounding the ship's construction, launch and subsequent demise.

Visitors are also ushered onto a ski lift-type ride that uses animatronic displays to showcase what shipyard life was like in the early part of last century. (Think long hours and unsafe working conditions.)

Biographies of some of the passengers, from crew members to society's most elite socialites, line the walls and segue into a particularly emotional section highlighting the doomed vessel's final hours, as well as the rescue efforts that ensued.

Footage of the underwater wreckage is also part of the exhibit, and museum-goers can see some of the equipment used in modern-day dives to the site of the sinking.

How to Get There

Cruisers visiting Belfast for a day can book a ship-sponsored shore excursion to Titanic Belfast or simply grab a taxi from the port. For anyone renting a car for the day, parking is available for a fee in a garage underneath the building. Titanic Belfast is located at 1 Olympic Way, Queens Road, Belfast, BT3 9EP.

The museum is open daily from 10 a.m. to 5 p.m. (except December 24 to 26) with expanded hours during the summer months. The last regular entry is 1 hour and 45 minutes prior to closing. Timed tickets, with slots every 15 minutes, cost £18.50 for adults and £8 for children (5 to 16). Children younger than 5 are free. Senior and student rates are also available, as are discounted tickets for admission one hour prior to closing.

Additionally, combination tickets (£30 per adult, £20 per child) offer a one-hour guided walking tour, as well as admission to both Titanic Belfast and SS Nomadic -- Titanic's fleetmate and the only remaining ship from the now-defunct White Star Line -- which is docked just outside.

Accepted currencies are pounds and euros, but all change will be given in pounds. Most major credit cards are accepted, including contactless. Tickets can be purchased online in advance, but a £1-per-ticket fee applies.

A gift shop, cafe and restaurant, and toilet facilities are found in the building, along with an ATM and free Wi-Fi.