Fast, reliable internet is increasingly important to cruise passengers and can be a factor when considering which cruise line or ship to book.

The good news is that simple internet tasks -- browsing websites, reading and sending emails, posting updates to social media sites -- are faster than they've ever been across most cruise lines. But performing more data-intensive tasks -- downloading or uploading photos, using Wi-Fi calling and VoIP (Skye, FaceTime, WhatsApp), and streaming TV shows, movies or music -- is still a crap shoot, with some cruise lines not supporting streaming at all.

A handful of cruise lines do stand out for significantly expanding the bandwidth capacity on their ships (typically from 1 to 2 megabits per second to as high as 10Mbps). Some of them can be commended for making internet access affordable, while others force you to pay for enhanced service. The following six cruise lines are our favorites for fast and/or affordable Wi-Fi onboard.

Royal Caribbean's VOOM internet is the gold standard when it comes to cruise ship Wi-Fi, with the fastest speeds out there. Some Cruise Critic forum members report speeds of up to 24Mbps, which, believe us, is fast! With Voom, there's not much you can't do. Need to upload pictures to Facebook or Instagram? Not a problem. Want to catch up with your favorite show on Hulu? You can do that, too. From streaming to Wi-Fi calls and VoIP applications on messaging apps, everything is supported.

Access to the internet on Royal Caribbean is tiered and is priced accordingly with prices varying by ship (generally speaking, none of the packages cost more than $20 per day except day passes). The Surf package is the slowest and is best for those who just want to use social media apps or check email. The Surf & Stream package is what supplies the super-fast internet.

Prices for each package are by device (one, two or four), per day with the lowest prices being for those who purchase a four-device plan; single day passes are also available.

Celebrity Cruises' Xcelerate unlimited internet is fast enough to enable streaming and VoIP capabilities on a pretty reliable basis. Recent upgrades have increased the speed of the Wi-Fi on Celebrity ships by 70x what it previously was; however, the Internet can still be constrained by the ship's location, as well as by how many people are trying to use the internet at once. Cruise Critic forum members, however, report few problems streaming movies and live sporting events on a consistent basis.

The cost for internet is a bit pricy, starting at $249 on a seven-night cruise. Buying a package before the cruise gets you a 10 percent discount off the onboard price.

Norwegian Cruise Line's internet ranges in speed, but can go quite fast. Though the line would not divulge its Wi-Fi's top speeds, Norwegian did recently invest to expand its bandwidth by 40 percent in time for the 2018 summer season. Most capabilities are supported, but you have to purchase the correct plan for what you want to do. Only one plan supports streaming, though depending on the ship's location and how many people are online at a time, you might be able to use a basic plan for VoIP apps.

The prices for Norwegian's plans are at the higher end for the cruise industry. For unlimited access to just social media sites, the cost is $14.99 per day ($105/week). An unlimited Wi-Fi package that does not support streaming of any kind (music or video) is $29.99 per day ($210/week), while an unlimited plan that supports streaming is $34.99 per day ($245/week).

You can also pay as you go or purchase a 250-minute package, but neither of these supports streaming. (All packages cost 15 percent less if purchased pre-cruise, and cruises of 13 days or longer receive a small per-day discount.) 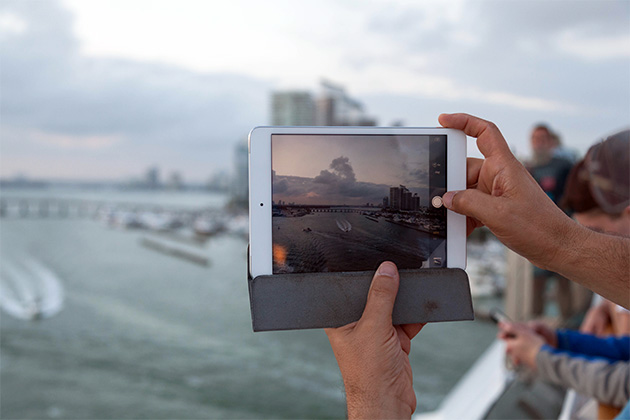 Speed: Great on MSC Seaside; average on other ships

MSC Cruises offers high-speed internet on its newest U.S.-based ship, MSC Seaside. (Europe-based MSC Seaview may offer the same speeds, but there are no confirmed reports of this yet.) Speeds for the premium plan are fast enough to support streaming and VoIP, but because MSC offers packages by data, rather than time, using high-data functionalities (like streaming movies or TV shows) will use up your plan rather quickly.

Plans are offered by data level and device usage. At the lower end is a one device, 1.5 gigabyte plan ($50) that's best for checking email and using social media, including posting photos and text messaging. A two device, 3GB plan ($100) and four device, 6GB plan ($160) are best for fuller usage of the internet, with the latter better for anyone looking to stream. (Keep in mind, one hour of streaming on Netflix uses about 1GB of data for SD video or up to 3GB for HD video.)

Silversea's standard internet, which is complimentary to all passengers, is generally reliable and supports most basic tasks, but its premium Wi-Fi is where the speed really comes in, generally fast enough to support both streaming and VoIP on a reliable basis. According to the line, Wi-Fi speeds can go as fast as 2.9Mbps -- slow for land-based internet, but at the high end for cruise ships. The average daily speed, of course, is less (the line could not provide a number), as the ship changes position and the number of people connected at any given time goes up or down.

Standard internet is free for everyone on Silversea Cruises, but those staying in larger suites get the premium Wi-Fi for no additional cost. Cruisers with standard who want to upgrade to premium can do so for $29 per day.

Speed: Average to Good with the Premium Plan; great on Carnival Horizon

Carnival Cruise Line has concentrated on making its internet more reliable, leaving its investment in increased bandwidth and speed for its newest ships only (namely Carnival Horizon and Vista). As a result, Carnival's Wi-Fi on most ships tends to be the slowest of the big three cruise lines and is the only one to not support streaming -- you can use VoIP with its top-tier plan (not including FaceTime) but sites like Netflix, Hulu and Spotify are blocked.

Carnival's internet pricing, on the other hand, is the best there is at sea. A Social Wi-Fi plan costs $5 per day and includes access to standard social media sites, as well as messaging apps. The VoIP function of such apps (Facebook Messenger, WhatsApp, etc.) does not work with this plan. The Value Wi-Fi plan costs $12 per day, gives access to most websites and occasionally will be fast enough to support the voice functionality of messaging apps.

The Premium Wi-Fi plan costs $17.70 per day and provides access to everything in the Social and Value plans, but does so at a higher speed (three times that of the Value Plan). It also supports VoIP calling on messaging apps and Skype (but not FaceTime), but be prepared for a noticeable lag time. (Prices are for plans purchased for the duration of the sailing; there is a discount if plans are purchased pre-cruise.)

Best Time to Cruise
It's one of the most common cruising questions: When is the best time to cruise Alaska, Australia, the Caribbean, Canada/New England, Hawaii, Europe or the South Pacific? The answer depends on many variables. For example, fall foliage enthusiasts will find September and October the best time to cruise Canada/New England, whereas families prefer to sail in summer when temperatures are warmer for swimming. The best time to cruise to Alaska will vary depending on your preferences for viewing wildlife, fishing, bargain-shopping, sunshine, warm weather and catching the northern lights. For most cruise regions, there are periods of peak demand (high season), moderate demand (shoulder season) and low demand (low season), which is usually the cheapest time to cruise. High season is typically a mix of when the weather is best and popular travel periods (such as summer and school holidays). However, the best time to cruise weather-wise is usually not the cheapest time to cruise. The cheapest time to cruise is when most travelers don't want to go because of chillier temperatures or inopportune timing (too close to holidays, the start of school, etc.). But the lure of cheap fares and uncrowded ports might make you change your mind about what you consider the best time to cruise. As you plan your next cruise, you'll want to take into consideration the best and cheapest times to cruise and see what jibes with your vacation schedule. Here's a when-to-cruise guide for popular destinations.
7 Dumbest Cruise Mistakes Ever
We've all been there: almost getting your Romanian spouse forcibly debarked -- and expatriated; sprinting through the St. Thomas jungle to catch your departing ship; eating three of Guy Fieri's 1,000-calorie burgers in one sitting. Perhaps not, but as Bram Stoker wrote in Dracula, "We learn from failure, not from success!" What has failure taught Cruise Critic's editors and contributors when it comes to cruising? Do your homework on visa requirements, and triple check that you know how to get where you're embarking. Be careful what you eat and what you book. Read our seven mini-stories of supreme stupidity, have a laugh at our expense, and vow never to make the same mistakes.
The Free Cruise Offer: Scam or Legit?
Thank you for your interest in Royal Seas Cruises on Ticketmaster. You will soon be receiving a call to book your free Bahamas cruise. Can't wait? This seemingly simple sales pitch began a yearlong journey of phone calls, complete with lightning-fast decisions, scheduling and hand-wringing, as I attempted to determine whether the free cruise offer was a scam, legit or something in between.
8 Overrated Activities in the Caribbean
Here are 8 overrated activities you might encounter during Caribbean cruises that you can easily skip.
12 Bad Decisions That Could Ruin Your Cruise
Don't let it be your fault that your sailing turns sour. Any of these 12 bad decisions could ruin your cruise. We're here to help you say no so you can save your vacation.
Unsold Cruise Cabins: How Cruise Lines Fill Them and How You Can Snag One
Getting a deal on a cruise sailing that's not selling well requires some effort -- and usually a lot of flexibility. To take advantage of the opportunity empty cruise cabins present, you must understand how cruise lines go about filling them.