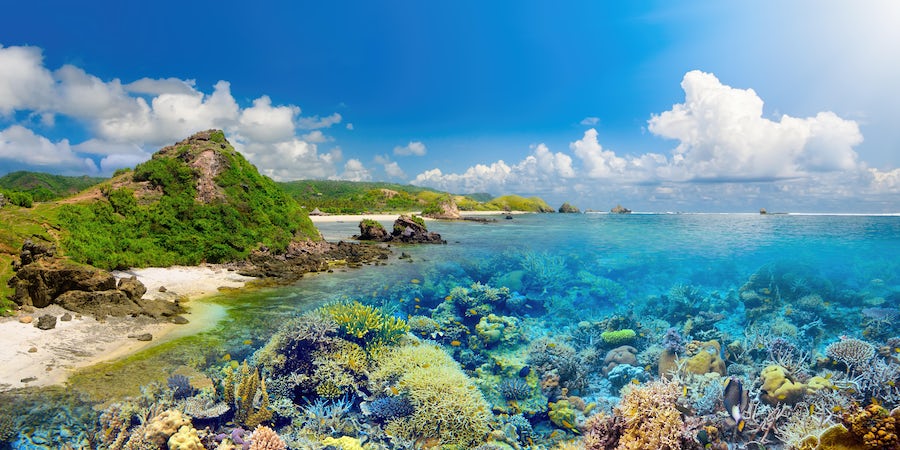 With a year-round tropical climate, fabulous beaches and picture-postcard views, the South Pacific is one of the world's most popular cruising destinations, especially for Australians. This diverse region also offers visitors much more than a spot to simply soak up the sun. Cruisers can enjoy a taste of France without the jetlag in New Caledonia, snorkel pristine tropical reefs in the Solomon Islands, go to church at a traditional Fijian village or shop for pearls in Tahiti. With more than a dozen ships plying the South Pacific's picturesque waters, many of them throughout the year, passengers have plenty of options.

This chart features a ship from each of the major South Pacific cruise lines such as Princess, Carnival, Celebrity and Royal Caribbean, as well as lesser-known lines such as Azamara, Windstar and Ponant. Each of the 12 ships suits a different type of traveller. Families on a budget might find the most value onboard P&O Cruises' Pacific Adventure, while couples can pamper themselves with a romantic sailing on Windstar's Wind Spirit.

Learn more about each line's itineraries and exclusive offerings to decide which one is best for you.

Note: Click on a ship name to get more info and read hundreds of cruise reviews.

Celebrity Solstice has a sleek, spacious and modern interior design, with a relaxed atmosphere. A unique feature of this ship is the open-air Lawn Club, a half-acre of grass on the top deck with ocean views and games such as bocce and mini-golf. Known for its great dining and bars, Celebrity appeals to sophisticated couples, though you'll notice more families during school holidays.

Regal Princess combines big ship features such as the SeaWalk with classic Princess favourites such as the Voice of the Ocean gameshow (a spinoff of The Voice TV program) and an aft pool for soaking up the sun. The 3,560-passenger Regal Princess also has an adults-only retreat, Movies Under the Stars and Discovery Channel activities for adults and kids alike.

Related: 8 Reasons to Cruise on the Refurbished Golden Princess

HAL prides itself on a traditional cruising experience. Expect a high quality of service and food quality in the main dining room, and plan a date night in specialty restaurants like Pinnacle Grill steakhouse or Canaletto. Maasdam attracts a more mature cruiser, but some families and multigenerational groups may be found on New Zealand cruises, especially during school holidays.

Go ice-skating in the South Pacific on Voyager of the Seas, a 3,114-passenger ship with enough restaurants, activities and entertainment to appeal to every age group. Featuring a FlowRider surf simulator, rock climbing wall and an ice-skating rink for professional shows and passenger skate sessions, there is little danger of getting bored on this action-packed ship. Passengers range from young couples to singles, active retirees and plenty of families, especially during school holidays.

Carnival Splendor promises fun for all with a Twister waterslide, kids clubs and vast Splendido Lido pool deck. Parents can order a mojito and soak up the atmosphere at El Mojito or escape the crowds at the adults-only aft pool area. This 3,006-passenger "fun ship" is great value for families on a budget and those who love interacting with the friendly, attentive crew.

Azamara offers several longer Tahiti and Hawaii itineraries on the 690-passenger Azamara Journey. Itineraries stop at several sought after destinations in Tahiti plus popular Hawaii ports such as Lahaina, Hilo, Honolulu, and Nawiliwili. With a focus on swimming, snorkelling, and mingling with other passengers, this intimate ship offers plenty of bonhomie and cultural immersion.

With its white sails billowing, the romance of Wind Spirit is hard to resist. This 148-passenger ship sails French Polynesia year-round and offers a convivial onboard atmosphere and water sports off the back deck. Dinner at the main restaurant combines casual attire with fine food and service in a single open seating. This intimate cruise experience appeals to well-travelled couples who appreciate the finer things and relaxing on holiday in equal measure.

The first of Ponant's expedition ships, the 184-passenger Le Laperouse, provides a comfortable, all-inclusive cruise experience that showcases the region's stunning scenery. The ship is built for active exploration with a fleet of Zodiacs and aft marina for watersports. The infinity pool is ideal for watching the South Pacific's stunning scenery go by, as is the industry first underwater observatory known as the Blue Eye Lounge.

Carrying 930 passengers, Viking Orion's refined ambiance, complimentary excursions, and included perks such as wine with meals, attract a discerning crowd, mostly empty nesters and retirees. Viking Orion also stands out with its high-tech planeterium for stargazing and eductaional lectures. When it's time to eat, passengers can choose from a variety of dining options, all of which are included in the cruise fare.

With a maximum of 3,100 passengers, this ship will offer a more lively South Pacific cruise experience than most other mainstream lines when it debuts in October 2020. Plenty of fun can be found at the P&O Edge Adventure Park and at the ship's lively bars, especially after the sun goes down. Free dining options abound and new specialty restaurants by chefs such as Luke Mangan are also set to debut. Pacific Adventure is sure to be a hit with cruisers of all ages who appreciate a larger size ship and low-key, casual vibe combined with modern Australian style.

The 596-passenger Silver Muse combines adventure with a luxury cruise experience. As an intimate, all-suite, all-inclusive vessel, it offers a lavish South Pacific cruise experience. The onboard team includes enrichment lecturers with specialist knowledge of the ports on each itinerary. The ship also features high-quality dining, large suites, butler and included extras like wine, beer and spirits.

This intimate 490-passenger ship makes an ideal home base for destination-intensive exploration. All passenger accommodations are spacious suites and nearly all of these have balconies, with the exception of the window suites on the lowest decks. This all-inclusive luxury ship attracts mature couples and wealthy families. Passengers shell out up front, but enjoy included amenities such as shore excursions, specialty restaurants, drinks and gratuities.