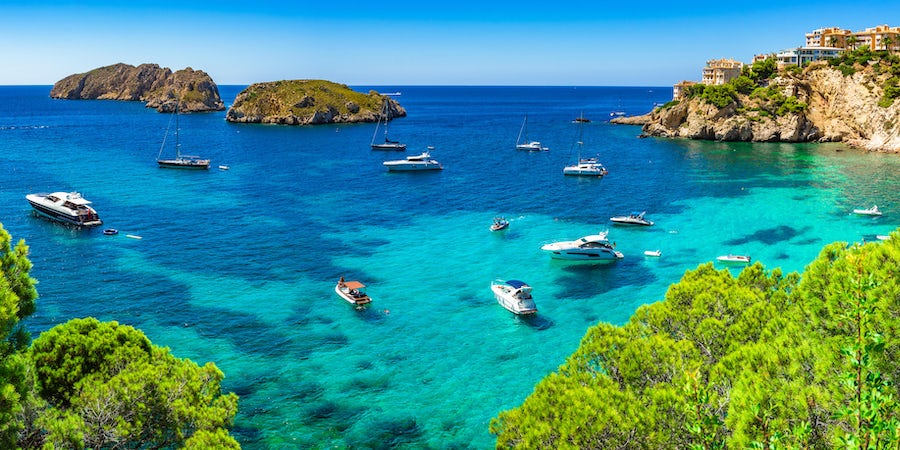 Best Months to Cruise the Mediterranean

The Mediterranean is an appealing region of about 20 countries in Southern Europe and North Africa (including two islands, Cyprus and Malta) that border the Mediterranean Sea. Its mix of cultural and religious sites, big cities and quiet islands make it an ideal itinerary for a cruise.

The Med, as it's known, is a year-round destination, with seasonal wine festivals and bustling holiday markets. What time of year you're looking to sail depends on if you want to soak up the coastal sun or save a little money and avoid the crowds in the process.

The best month to cruise the Mediterranean depends on what you're looking for in a vacation. We took a look at factors like weather and sea conditions, festivals and, of course, pricing, to determine which travel dates are right for you.

Why: If you're looking for an alternative to the throngs of tourists in the Caribbean, join the Europeans who snowbird to the Canary Islands this time of year. Mediterranean departures in January and February typically sail from Barcelona to Tenerife, Palma de Mallorca and other ports around Spain and also Italy. You'll avoid (some) crowds and cruise cheaply; transatlantic airfare might also be reduced during these seasonally "off-peak" travel months.

Pricing: There are plenty of deals to be had in the Mediterranean during the first two months of the year. You can spend less than $75 per person, per night, on a number of weeklong or 10-night sailings from lines including Norwegian and MSC.

Related: 5 Cruises That Are Cheaper Than a Weekend in New York City

Temperature: Even in the dead of winter, average temperatures in the Canary Islands rarely dip below 69 F. Barcelona is a bit cooler -- expect a high of about 59 F and lows dipping to 47 F.

Rainfall/sea conditions: Unfortunately, winter brings extremely rough seas to the Mediterranean; anticipate strong winds and storms, especially around the Bay of Biscay (western coast of France into Spain). On the plus side, there is very little rainfall in the Canary Islands and even in Barcelona during this time of year.

Festivals: Carnival -- typically held in February, before Lent -- is one of the largest festivals in the world, and Venice is the place to celebrate. Venice is featured on a handful of world cruise itineraries this time of year, but celebrations are observed in many places globally, including Barcelona.

Word of advice: As in most destinations this time of year, winter storms can throw a wrench in an otherwise relaxing cruise vacation. Be prepared to endure a little "weather" as a caveat to lower fares.

Why: Early spring marks the very beginning of the main Mediterranean cruise season, and if you're looking to avoid the hordes, this is the time to cruise. Plus, while a few families can be expected to sail over school breaks, Mediterranean cruises don't draw the typical spring break crowd.

Related: 7 Reasons to Drop Everything and Cruise This Winter

Pricing: Fares rise from winter pricing, but a seven-night MSC cruise can be booked for about $81 per person, per night. Viking Ocean Cruises begins to offer a number of solid Mediterranean itineraries this time of year, including a 12-night Mediterranean Odyssey (Barcelona to Venice with eight ports of call, including Dubrovnik) and a seven-night Italian Sojourn cruise (Venice to Rome). Viking is a premium line with more inclusions, and fares start in the range of about $500 per person, per night.

Temperature: Most of the Mediterranean stays cool this time of year, but warms up to the high 50s into the 60s during sunny afternoons. It's a pleasant time of year to explore in port without overheating.

Rainfall/sea conditions: While March and April are moving into the spring season, rough seas can still be possible, especially in early March. Moving out of the winter months, a few rainy days are a possibility this time of year.

Festivals: March 25 is considered Greek Independence Day; keep the date marked if you'll be in Athens or exploring the Greek Isles. Easter and Good Friday (dates change by year) are major holidays in countries like Italy, France, Spain and more; check with your cruise line if excursions will be affected or if there will be observances onboard.

Word of advice: Many feast days in the Med mean lots of shops, restaurants and other main attractions might be closed or operating on limited hours when you visit. Be sure to check if any of these holidays fall on dates during your cruise and plan accordingly.

Why: Experience the benefits of summer in the Mediterranean -- long days and plenty of sunshine -- without quite as many people as the midsummer months. The season for visiting the Baltic and Northern Europe begins in May and runs through September. In other destinations, late spring is a fabulous time to sneak in a Med cruise before the kids are out of school and summer is in full swing.

Temperature: The degrees begin to rise in May, making it a great time of year to head to Greece, especially; very little rainfall throughout the country is coupled with temperatures in the high 60s and 70s.

Rainfall/sea conditions: Expect relatively mild sailing conditions, but the water might not be as warm as you'd expect if you're heading to the beach. Sea temperatures tend to match that of the air in the Mediterranean -- a dip could be a brisk 65 F. However, in June, in Tel Aviv, water temperatures average a respectable 75 F.

Festivals: The solstice on June 21 is celebrated different ways around the world, but various countries in the Mediterranean welcome summer with special observances each year. The Festival of St. Joan is held annually in Menorca, Spain, around June 23 and 24, blending Christian and pagan rituals. La Festa di San Giovanni is celebrated by modern Italians in Rome, harkening back to a more ancient female-led ritual called Vestalia.

Word of advice: Even if you find a deal on your cruise, be sure to track airfare just as carefully. Plenty of college students and young adults still set out on the starry-eyed backpacking trip through Europe, and most will be taking off right after graduation (read: this time of year). Nailing the perfect nonstop flight for less might require a little creativity and booking finesse.

Related: Under 30? 14 Reasons You Should Choose a Cruise for Your Next Vacation Why: In the height of summer, with plenty of daylight and temperatures fit for Mediterranean beach days, July and August are the most popular months to travel -- by cruise or otherwise -- to the region. Families are free to travel as a unit, and the allure of gorgeous coastal cities basked in warmth is hard for many to pass up.

Pricing: Cruise lines charge a premium to sail to the Med during the middle of the summer. A 10-night cruise onboard Norwegian costs about $225 per person, per night for an inside cabin. Expect to pay well over $1,000 per person for any sailing over July or August in an entry-level cabin category; even discounted cruises will run more than $100 per person, per night.

Temperature: Part of the appeal of the Med during the summer is the heat, but be wary of where in the region you are traveling. Barcelona might average a toasty but agreeable 80 F, while Greece is prone to heatwaves that reach into the 90s. Elsewhere, expect temps in the 80s that can drop to the 60s by nightfall.

Rainfall/sea conditions: To mitigate any discouragement you might feel about paying top dollar to experience the Mediterranean with millions of other tourists, know that weather conditions both on land and at sea are at their best this time of year. Expect smooth sailing into port, and dry, sunny days ashore.

Related: 9 Waterproof Items You Need for Your Next Cruise

Festivals: The Catholic and Eastern Orthodox feast of Assumption, or the Feast of the Virgin Mary, is celebrated on August 15 across many places in the Mediterranean; it's a nationwide public holiday in countries such as Italy, Portugal, Spain, Monaco and Croatia.

Word of advice: Many Europeans head out for their own vacation during August, so be aware that some businesses might be shuttered when you are calling. As crowds thicken over the summer, especially at popular tourist attractions, pickpockets will be on the prowl -- be smart about your belongings.

Why: September is often hailed as the ultimate month for shoulder season travel, and rightly so. Cruising just after the peak of summer is a fantastic way to ride the coattails of great weather while avoiding the densest crowds. Sailing prices also begin to dip.

Pricing: While cruise fares won't return to super-discounted pricing, the high demand of summer travel has eased, meaning you should be able to book a weeklong cruise to Greece and Italy for about $115 per person, per night.

Temperature: Early fall is the perfect time to visit the Western Mediterranean, but the further the dates are toward October, the chillier it can get. Nighttime temperatures begin to drop into the low 50s come October, while daytime highs vary and might still reach the 70s.

Related: Everything You Need to Know About a Norway Cruise

Rainfall/sea conditions: In addition to cooler temps, October also brings rain to the coast as the winter season is ushered in. This is the rainiest month for Marseille, but expect the chance of rainfall in ports like Rome and Tangier, Morocco, as well. Winds can vary, meaning sea conditions should hold out for most of this time, but can deteriorate later in October. However, waters are warmest this time of year off the coast of Sardinia.

Festivals: Classically, it's wine-harvesting time in Tuscany during the very first week of September, so expect plenty of food and wine festivals around Italy during these months.

Why: Traveling to the Med in the winter is less popular, but temperatures can still be mild. Plus, pricing plummets to some of its lowest levels all year. Christmas markets pop up in some cities during the Advent season, and make for a memorable shopping experience.

Pricing: While fares can jump during holiday cruises (Thanksgiving, Christmas, New Year's), overall they can drop to half of what they were over the summer. Pricing for a comprehensive itinerary on an 11-night sailing can be found from $54 per person, per night. We found a seven-night cruise from Barcelona to the Canary Islands, Italy and France from $82 per person, per night on Costa Cruises.

Temperature: While most ports will remain a temperate 50-something, places like the Canary Islands, Malta, Crete and Cyprus stay nice and warm -- expect high 60s to low 70s during the day.

Rainfall/sea conditions: The same conditions plague December that befall January -- winter storms can lead to stormy seas, so waters might be choppy and cruising could get rough. In port, November can be especially rainy. Keep in mind that while summers in the Med are warm and dry, winters are characterized as being cool and damp.

Festivals: Advent season typically begins the first week of December and leads up to Christmas. This is the time period when the holiday markets are held and special seasonal food, drinks and gifts are sold.

Word of advice: While many stalls sell handmade goods at the Christmas markets, some will peddle trinkets made in China -- check the label to ensure your purchase is authentic.