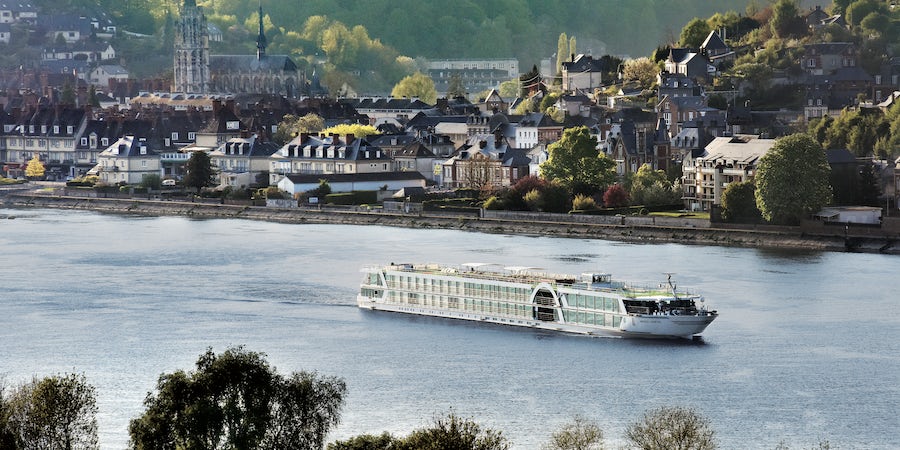 5 European River Cruise Lines Worth a Look by Americans

As river cruising continues to boom, more and more lines compete for attention on the European waterways. While many American travelers have heard of companies such as Viking, Grand Circle, Tauck, AmaWaterways, Crystal and Avalon -- to mention just a few -- there are also some European companies out there that Americans probably don't know that may deserve consideration. Here's a look at who they are and what they offer.

Who: Amadeus -- which is also marketed under the name Amadeus by Luftner Cruises -- has been going for more than 30 years and is one of the oldest lines in Europe. For many years, the cruises were mainly sold on the German-speaking market but all that has changed and now its itineraries are available in the U.S. and other English-speaking countries. It operates a fleet of 14 stylish vessels, with the interior decor overseen by Martina Luftner, co-founder of the family-owned fleet. The recently launched Amadeus Queen features new design technology with a reduced height to enable the ship to continue sailing when other vessels are affected by high water levels and, in 2019, the expanding line will debut the new sister vessel Amadeus Star.

Why You'd Like It: The majority of river cruise lines include a daily excursion in the fare, but Amadeus bucks the trend by giving passengers complete freedom to do as much or as little as they choose -- and pay accordingly. For all cruises, there's an "a la carte" program ofthree -- sometimes four -- excursion packages, ranging from around four shore tours during a weeklong cruise to a full-on schedule with up to two per day. The newest ships boast excellent facilities, including a walk-in closet in the majority of staterooms, along with an onboard massage therapist and a hair stylist, the latter a relative rarity on river vessels. Amadeus Provence, which sails on the Rhone and Saone, has a new-to-river infinity pool and Amadeus Queen boasts the line's first indoor pool with a retractable roof.

Caveat: Amadeus does not operate an opening-seating policy in the restaurant, which is unusual for a river cruise line. You'll be allocated a table at the beginning of the cruise, with fellow folks from the U.S. or English speakers from other countries, and that's where you stay for the duration. In theory you can ask to be moved, but it could be uncomfortable as you're going to bump into your spurned tablemates for the rest of the sailing.

Who: Founded in 1984, the U.K.-based tour operator Riviera Travel is the country's largest provider of European river cruises and until 2017 catered solely for Brits. Under the name Riviera River Cruises, its itineraries are now being sold in the U.S. and Australia. The line demonstrated the importance it is placing on the North American market when it chose Gloria Bohan, founder of Omega World Travel, to christen its newest ship MS Robert Burns, the 13th in the fleet. Riviera will continue to expand in 2018, with a new vessel on the Douro and it will debut two more ships next year. In addition to its Swiss-owned and operated European fleet, the line also charters ships on the Nile, Mekong, Ganges and Yangtze.

Why You'd Like It: Riviera has built up an award-winning reputation in its homeland for transparent, value-for-money fares. The "price promise" means cruises are never discounted or put on sale, so everyone pays the same whether they book a long time in advance or close to sailing date. Solo travelers also get a great deal as on each sailing there are five double cabins on the lower deck reserved for single passengers with no additional supplement. There are also exclusive solo cruises where none of the cabins carry an increment, so you can splash out and book a suite and pay the usual per person fare. If you love all things British and, dare we say, prefer to travel with Brits rather than large groups of Americans, then you will feel at home. Menus are skewed to British tastes so along with international fare you will be able to enjoy the "full English" breakfast of eggs, bacon, sausages, tomato, baked beans and more, and dishes such as bangers and mash" (sausages and mashed potato). There are also kettles in every room so you can boil water for a "proper" cup of tea.

Caveat: The fare savings have to come from somewhere and, most notably, Riviera does not include wine, beer or soda with lunch and dinner, which is now the norm on most lines. However, there is a drinks package for beverages with meals that costs $129 per passenger. The excursion choice is also more limited than some lines. A daily shore tour is included in the fare, mostly a guided city walking tour, and there are only a few optional for-fee special tours.

Related: 10 Tips for Stretching Your Cruise Dollars Onboard

Who: You might not be familiar with the A-Rosa name, but you certainly can't miss the striking white vessels sporting a large pair of lips carrying a red rose on the bow. Sailing on the Rhine, Moselle, Main, Danube, Rhone and Saone, the well-established German-owned company was launched in 2000 for the domestic market and is now raising its profile in the U.S. and other countries with all-inclusive cruises. There are currently 11 vessels in the fleet and in 2019 A-Rosa will debut on Portugal's Douro River for the first time with a newly constructed ship, the company's first new-build since 2014. While passengers can sign up for any cruise, there are special "international" sailings with announcements and written material in English and a dedicated English-speaking host.

Why You'd Like It: The onboard vibe is very relaxed, and with flexible dining and excursion options, A-Rosa is ideally suited to anyone that falls outside the usual river cruise demographic -- such as younger couples, families and singles, in addition to well-traveled clients looking for a fresh experience. The line's dining arrangements also differ considerably from most river vessels, with a buffet-style breakfast, lunch and dinner that provide unrestricted mealtimes during the restaurant opening hours. There is a very small a la carte dining area, with one dinner here included in the fare. Germans love their wellness and a standout feature is Spa-Rosa. A world away from a token massage bed in a lower deck cabin, the newer ships have a spa with a reception desk, gym, treatment rooms, sauna and relaxation area. The line is also very family friendly and one of few to have family cabins and a kids' club with a packed program of activities on selected sailings during German school holidays.

Caveat: With an optional excursion program and laid-back onboard atmosphere, the line tends to appeal to independently minded passengers and won't suit folks that like 'hand holding' every step of the way. Entertainment is also limited to the onboard singer and musician and A-Rosa doesn't feature the visiting singers, musicians and dancers found on many other river cruise lines.

Who: Hotel barges are the lesser-known and smallest -- in every sense -- division of the river cruise sector. The main player is U.K.-based European Waterways, which has been in the business for nearly 40 years and operates a fleet of 17 barges sailing along narrow canals and inland waterways in the U.K. France, Belgium, Holland, Germany, Luxembourg and Italy. Usually converted from old working vessels, the old-style blue and white hulls lead to beautifully fitted-out ships that carry just four to 20 passengers and are equipped with modern amenities. Cruises are all-inclusive and fully crewed with an onboard chef, hostesses and guide. Barges can also be exclusively chartered by families and groups of friends.

Why You'd Like It: Hotel barging is ideal for anyone who doesn't want a cookie-cutter cruise and is seeking something unique and different. The high crew-to-passenger ratio ensures a very personal experience that's akin to a floating house party, with all excursions, meals and unlimited tea, coffee, sodas and alcoholic beverages included in the fare. There are themed cruises too, including painting, golf, cycling and Scottish whisky trail sailings, and itineraries are customizable, with additional options including wine appreciation and hot air ballooning. With one chef catering for such a small number of passengers, the cuisine is exceptional and on a par with the best upscale restaurants. Some cruises also include a visit to a Michelin-starred restaurant for lunch and dinner. Barges sail through remote towns and villages that are often way off the regular tourist track and offer a very immersive experience into local life and culture.

Caveat: Cruising at walking speed, the pace of life will be too slow for anyone who wants to pack a lot into a week or tick off a list of major European cities. Hotel barges travel neither far nor fast and the distance covered might not amount to more than 50 miles. The high level of personal service and inclusions also means fares are higher than mainstream river cruise lines.

Who: CroisiEurope is the biggest river cruise line you've never heard of. One of the original pioneers of river cruising, the French-owned company was founded more than 40 years ago and is the largest European-based river line. Still family owned and run, it operates 50 company-owned ships and five chartered vessels. In addition to regular riverboats, the fleet includes hotel barges and innovative modern paddlewheelers designed to sail on the shallow Loire and Elbe rivers. In addition to all the major European waterways, CroisiEurope offers cruises on lesser-known rivers such as the Tisza in Hungary and Guadalquivir in Spain. It also features exotic destinations, including the Mekong in Vietnam and Lake Kariba in South Africa, and in 2018 debuted cruises on Canada's Saint Lawrence River and Lake Ontario. It also has a seagoing vessel, MS Belle de l'Adriatique, which was completely renovated last year and sails along the Mediterranean and Adriatic coastlines.

Why You'd Like It: For Francophiles, CroisiEurope is a dream come true, particularly on sailings in its homeland that provide a really authentic French experience. Throughout the fleet, all the vessels have a predominantly French crew and showcase French cuisine -- even the ships on the Mekong have a dedicated baker producing croissants, baguettes and pastries. The line also offers some unique sailings you won't find anywhere else. While mainstream lines give a wide berth, in every sense, to the notoriously low waters of the Loire, CroisiEurope commissioned a paddlewheel vessel with an ultra-shallow draft to sail on the river and is the only line operating on the Loire. It has since launched a pair of similar vessels on the Elbe. It is also the only line to sail from Seville on Spain's Guadalquivir with the dual-purpose river and sea vessel La Belle de Cadix, which also takes passengers along the Atlantic coast to Cadiz. Despite offering value-for-money fares, there are plenty of inclusions, including wine, beer and soft beverages with lunch and dinner and an open bar throughout the day.

Caveat: Lunch and dinner menus are fixed, with no a la carte options. However, if you are vegetarian or, for example, don't like fish, most dietary requirements can be accommodated and you will be served an alternative dish. This should be mentioned at the time of booking and confirmed once onboard. Like Amadeus, CroisiEurope also operates fixed dining room seating for the duration of the cruise. On most cruises, North Americans and other English speakers will be in the minority, but all the crew speak English and announcements and written material are in English.