You may also like
Dismiss
Compare the 17 Best Small Cruise Ship Lines
Where to Find Your Favorite Characters on a Cruise
Give Back With Purpose Excursions on Carnival Cruise Line
Disney Cruise vs. Carnival Cruise
Holland America vs. Viking
How to Prepare for a Snorkel and Dive Cruise
8 Reasons To Do Long Cruises with Holland America Line
5 Reasons Why Families Will Love the Refurbished Norwegian Jewel
Cruise Passenger Demographics: Who Will Be on My Cruise?
8 Things to Love About Explorer Dream 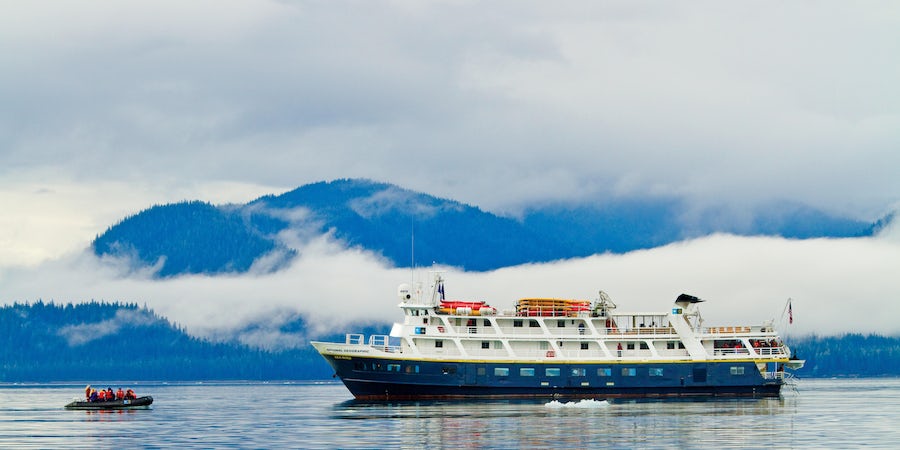 Expedition cruising has become a popular option for cruisers of all ages, with many expedition lines catering for young kids and their grandparents -- often on the same cruise. A number of lines have even introduced activity programs for children -- both on and off the ship; some have interconnecting cabins and some even give over a space on the ship as a kids area.

However, not all expedition cruises are suitable for all ages, both in terms of the ship, the type of excursions and, most importantly, the destination. Here are five useful things to know about family expedition cruising.

1. It's All About Shared Experiences

As more people place greater worth on experience rather than material goods, the idea of an expedition cruise has become more popular. It's not clear when this trend exactly began, but Sven Lindblad, founder and CEO of the line that bears his name, dates it way back to 2001, after 9/11, when sharing experiences became more important to many grandparents than simply leaving money behind. What people have come to realize, Lindblad said, is that places like the Galapagos and Alaska, where nature reigns supreme, are ideal for sharing experiences -- whether you're 8 or 80.

Asta Lassesen, COO of Hurtigruten said the desire for new, shared experiences has definitely led to an increase in families onboard for Hurtigruten as well.

Worth noting: The emphasis is on shared -- there are no kids' clubs, counselors or kid-specific activities onboard most expedition cruise ships. Families should not expect water slides or cartoon characters running around outdoor decks. What they can expect, is active experiences in spectacular nature on smaller, custom-built ships. An expedition cruise is about spending time together as a family -- not apart.

2. Good for Most Ages

Expedition cruise experts agree that adventure cruising is good for most kids, starting at about 6 to 10 years, depending on the maturity of the child and the destination.

Related: Family Cruising on a Luxury Cruise: What to Expect

According to Hurtigruten's Lassesen, expedition cruises are suitable for families, but not all families. Those who expect the cruise line to entertain their children for them will not be happy. More often than not, families traveling with children will need to be able to entertain themselves for periods of time. More important than a minimum age, she added, is how much the children -- and even their parents and grandparents -- appreciate nature and wildlife.

Lindblad and Frederic Guillemard, commercial director, Europe for Chile-based Australis, both said 5 to 6 years old is really the youngest age parents should consider taking their kids on an expedition cruise, as kids younger than that just won't get as much out of the experience. Lindblad Expeditions has a family program specifically designed for the Galapagos and Alaska that gives kids the chance to try their hand at scientific research and exploration.

Michael Woods, brand marketing director of Australia-based Aurora Expeditions, told Cruise Critic some of the more extreme destinations should probably be reserved for older kids. For instance, while Aurora will take kids as young as 8, Antarctic and Arctic departures are better suited to those 12 and older.

3. There Are Kid-Friendly Activities -- But They Are Limited

While kid-specific activities are not common, some lines have begun programs targeted at young cruisers. Lindblad Expeditions, for instance, has launched National Geographic Global Explorers, created in partnership with National Geographic Education. The initiative, which debuted in 2017, is designed to provide a "smart fun" experience; kids learn how to drive Zodiacs, receive navigation training and keep a daily science journal. Activities, which range from scientific research to exploration basics to storytelling are adapted to participants' ages for maximum engagement.

The program appeals to parents and grandparents frustrated by their kids looking at electronic devices all day, Lindblad said.

Such activities also mitigate the need for kid facilities on expedition ships, he added, though for the first time in 2017, Lindblad launched a ship with interconnected cabins, making it easier for families who need larger accommodations. When families are learning together and sharing unique experiences together, kids don't get bored. (Which is not to say, the kids won't sometimes take over an area of the ship if there are enough of them onboard.)

Hurtigruten has a similar program, called Young Explorer, which can be found year-round on its biggest expedition ships: MS Midnatsol, as well MS Finnmarken, which both sail up and down the Norwegian coast. During school holidays, the program can also be found on other ships in the fleet.

Related: Just Back from the Arctic with Hurtigruten: Following in the Footsteps of Susan Calman

Young Explorer is mainly aimed at children ages 7 to 13, but Hurtigruten's Expedition Team and staff can adapt it to the age group onboard, as needed. Activities include learning about polar history and animal life, map reading and basic navigation, plus a behind-the-scenes tour of the ship and meeting officers and crew. Hurtigruten also emphasizes sustainability in its Young Explorer programming, so that kids learn the importance of taking care of the oceans.

Metropolitan Touring, which operates three ships in the Galapagos, provides children with a journal, a coloring book and the chance to collect pins representing the "Big 15" endemic species the line has classified. And, like the other lines, often a room (usually the library) gets taken over by kids if a lot are onboard.

4. Most of the Action Takes Place Off The Ship

Another reason expedition cruise line executives say kids' facilities aren't needed on the ship is that most of the action takes place off the ship.

Children are very curious, Australis' Guillemard said. They want to explore, not only on the ship, but off the ship as well. They might even enjoy discovering all the types of flora and fauna more than any of the adults.

Many of the onshore experiences can be adventurous as well, something all kids love. Hurtigruten offers its passengers the chance to sleep outside under the stars, go king crab fishing, sleep in a snow hotel and taste local food.

Most executives agreed: The Galapagos Islands are hands down the best way to introduce children of almost any age to the wide range of flora and fauna in the world, but in particular the latter as it's so tame.

It's not that Antarctic is too difficult for a 6-year-old, Lindblad said, but everything is farther away from the ship. It's just not as immediately engaging as in the Galapagos, where a kid can walk right up to a sea lion. You can't do that in the Antarctic.

Aurora Expeditions' Woods said the climate in the Galapagos is more suited to younger kids, but that older tweens and teens would love Antarctica for the diversity of wildlife -- and cuteness of penguins, of course.

Australis, which only operates in the Chilean fjords, is also less challenging than the poles; most landings are dry and walks are gentler hikes rather than overland treks.