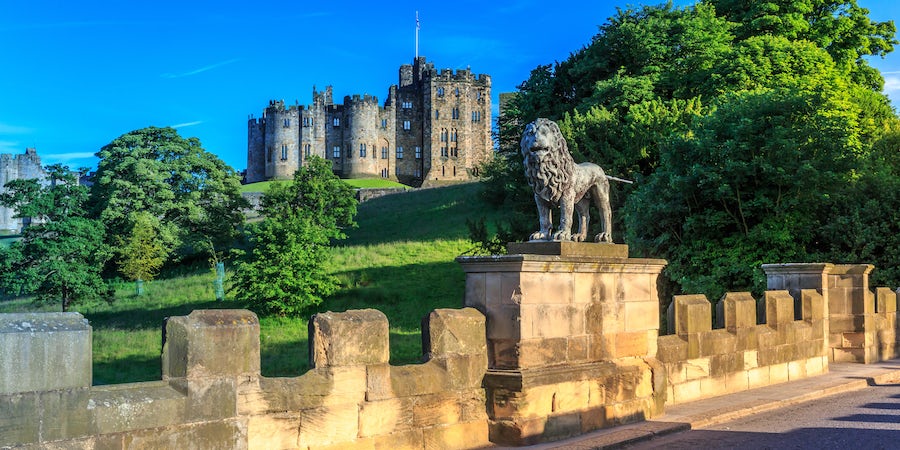 Newcastle cruise port or the Port of Tyne (or North Shields to give the place it's actual name), lies just nine miles from Newcastle, the premier city in the north east of the U.K. and a great destination in its own right (it was named by Rough Guides as the number one city to visit in the U.K. in 2018).

The Port of Tyne is also the gateway to Northumbria, widely regarded as one of the most beautiful counties in England, with stunning castles and cathedrals, as well as areas of outstanding natural and historical landmarks charting the Industrial Revolution.

It is well connected with good metro, rail and taxi links all over the region, and is easy to get around if you plan on doing it on your own rather than on a ship-organised shore excursion.

It's hard to whittle down the top 5 day trips from the Port of Tyne, but here is our selection:

Less than 40 miles north of North Shields is Alnwick Castle, famous as the setting for both many of the "Harry Potter" films, as well as some of the interior scenes from the wildly popular "Downton Abbey". Set in palatial, manicured gardens, the castle's first stones date back to 1092. Today, it remains the ancestral home of the Percy family, whose links go back beyond the time of Henry VIII. One of the line, Henry Percy, Duke of Northumberland, was said to be betrothed to Anne Boleyn long before Henry Tudor came on the scene. The castle itself is a vaulting, Romanesque masterpiece that remains completely intact to this day.

The adjacent 42-acre Alnwick Gardens have been fully restored to their former grandeur at a cost of £42 million and include grand formal beds and a fascinating poison garden full of deadly plants. For lovers of maritime history, Alnwick's White Swan Hotel contains panelling from the first-class public rooms of RMS Olympic, the earlier, near identical sister ship of the Titanic. Recreated in much the same way as it was on the original ship, it's both a living museum and an atmospheric spot for lunch or afternoon tea.

Set high above an S-bend in the River Wear, the vast, Romanesque Durham Cathedral looms above the cobbled streets of the old city. Originally the seat of the Prince Bishops -- the original feudal rulers of the region -- it was famously described as "Half house of God, half castle 'gainst the Scot" by Scottish author Sir Walter Scott. Its associations go back to the time of St. Cuthbert, and some of his relics are said to be interred there. Built of sandstone and completely intact, the cathedral and neighbouring Norman castle on Palace Green are both UNESCO listed, and the landmark complex is visible from anywhere in the city. You are welcome to walk around inside, though a voluntary donation is requested. Taxis are not allowed to travel to the green itself but you can walk from the old town or catch the cathedral shuttle bus from the railway station. If time allows, meander down into the cobbled, almost totally traffic free streets of the historic city centre and enjoy afternoon tea in one of the run of cosy cafes that flank the river. You can also take an hour-long, guided river cruise.

Famous for the warmth of its welcome, the legendary 'Toon' is a wonderful sprawl of Georgian architecture, old Victorian music halls, and cutting edge modern buildings such as The Sage, located on the Gateshead bank of the River Tyne. A stunning vista of seven bridges span the mighty Tyne itself and, if time allows, you can either walk past them all or see all of all of them from one spot. The Tyne Bridge, with its evocative coat hanger shape, is world famous and unmistakable, while the striking new Millennium Bridge is as modern and eye opening as it gets. If you're a history buff the Discovery Museum will keep you entranced all day. It's a key exhibit is the 35- foot long steam yacht, Turbinia. This was the first ever turbine powered ship in the world, and its debut at the 1897 Diamond Jubilee review for Queen Victoria created worldwide headlines at the time and changed the course of sea travel. Art lovers can feast on world class displays in the Baltic Centre for Contemporary Art, a former flour mill renovated at massive expense. It regularly houses some of the best displays of art north of the London and hosted the 2012 Turner Prize, the first time the exhibition had been held outside the capital.

Beamish is a compelling, meticulously crafted open air museum that used authentic buildings to showcase life as it was for ordinary people across the North East of England in the 1820s, 1900s, and the 1940's wartime era. Here you'll find a reconstructed miners' village that includes cottages, an authentic fish and chip shop, and well tame, friendly pit ponies. There's even a children's school from the same period. A ride on the steam hauled colliery railway is a nostalgia fuelled must, and there's also a street tram, complete with a conductor in period uniform. In the 1940s area, you can sample genuine, wartime delicacies as Spam sandwiches, and see rations cooking on the Aga range in the farmhouse. There's also a reconstructed pill box bunker. Beamish hosts displays from locals, such as genuine First World War art drawn in the trenches of Flanders and the Somme. It's engaging, evocative time travel in one convenient package.

Related: Why Enchanted Princess Might be the Easiest Cruise Vacation You Can Take Right Now: Live Onboard

You'll see Tynemouth Priory as you sail in and out of the River Tyne; it's located at the edge of the north bank of the river and rears upwards like a clutch of skeletal fingers, pointing at the sky. The location means it's not too far away and you can quite comfortably visit it in a couple of hours or so.

Think 'stones and bones' (archaeology and fossils) and you'll get the basic topography quite easily. The origins of the site date back to the 7th century, and over the years it became a byword for skullduggery, murder and violent mayhem. Plundered by the Danes in 800, it was subsequently strengthened by the local monks, only to be pillaged again by the Danes in 875. The notorious King Edward II took refuge here in 1312 with his lover, Piers Gaveston. In 1538 the monastery was disbanded during the Reformation brought in by Henry VIII and his chief minister, Thomas Cromwell, and the handful of remaining monks were unceremoniously expelled and the building fell into disrepair.

While the stunted remains are very impressive, it is the location that makes the priory well worth a visit. There's an excellent panoramic view from the lofty grass promontory overlooking the harbour and beyond. For a real, authentic 'Geordie' taste, grab some of the delicious local fish and chips while you're there. The fresh sea air adds a definite 'tang' that cannot be replicated.

Related: Things to Do in San Diego Before a Cruise